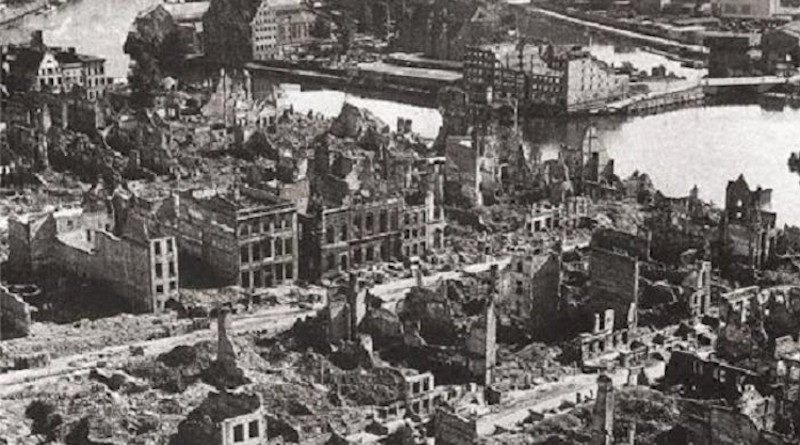 Gdańsk (Danzig) downtown destroyed by air strikes and artillery fire (1945). On September 1, 1939 the German armies invaded Poland. Two days later the British government declared war supposedly to aid Poland to hang on uncompromisingly to Gdansk, which few British, French or Americans had ever heard of a few months earlier. Photo from Public Domain.

The tanks will roll across Moscow’s Red Square on June 24. It is the day of the great parade to mark the 75th anniversary of the ending of the Second World War. In the West it’s not that well-known a fact that the Soviet Union lost many more soldiers and civilians in the war than all the rest of the allies put together. Without the alliance of the West with Russia Hitler would undoubtedly have won the war.

Ignorance is a common trait not only in the West but in Russia too. How many Russians today are aware of the sheer quantity of arms, munitions and even fighter planes and bombers shipped through dangerous northern seas by the US and Britain to Russia’s northern ports in order to help Stalin’s army and air force?

Flawed and ignorant thinking in both Russia and the West today dominates the discourse when the war is discussed and analysed. The assumption made is that the war could not have been avoided. It was a “good” war.

It is widely believed that Churchill was right to work to topple Chamberlain who believed there was a way to persuade Hitler to avoid war; that the Soviet Union was always on Hitler’s target list and had a reason to persuade Hitler to sign a non-aggression pact; that the Anschluss, the incorporation of Austria into the Third Reich, went against the will of the Austrian people; that the Poles were the innocent party in the war, despite refusing to be flexible over a deal to make a compromise over Gdansk, a piece of former German territory ruled by Poland, even though the Polish government had supported Germany’s take-over of Czechoslovakia; that Chamberlain’s decision to throw down the gauntlet to Hitler once the German attack on Poland began on September 1, 1939 was absolutely right.

Above all was the conviction that from the beginning Hitler was intent on a European-wide war. None of these are true.

This isn’t just my thinking. Basil Liddell Hart who was widely considered in Britain as its foremost military strategist and was knighted by the king to mark his service to military thinking was an exponent of the above. So was A.J.P. Taylor, the Oxford don who was Britain and America’s most well-read historian and author of the intimately researched “Origins of the Second World War”, which no politician or journalist practicing today has in all likelihood read.

They are ignored, not because their scholarship has been proved wrong, but because public opinion could never accept such an interpretation. Too much blood was spilt by the allies for such idiosyncratic views to be acceptable. If these two brilliant men had lived in the Soviet Union in Stalin’s time undoubtedly, they would have been tried and executed.

Hitler had a singular initial ambition- to recover the territory that had been taken from Germany after World War I, but definitely not by war, as he wrote in a directive in March 1939.

Liddell Hart, who foresaw the German use of the Blitzkrieg, writes: “It is not true that Western statesmen were as unaware of Hitler’s convictions as they later pretended”. Such was Liddell Hart’s status, he had trusted access to the highest level of thinking and planning in the British government, as his big books make clear.

He went on to write: “In 1937-38 many of them were frankly realistic in private discussion, though not on public platforms, and many arguments were set forth in British governing circles for allowing Germany to expand eastwards, and thus divert danger from the West. They showed much sympathy with Hitler’s desire for Lebensraum and let him know it”.

(Lebensraum is the territory that Germany believed was necessary for its development. It was a concept of settler colonialism which was widely held in Germany from the 1890s onwards.)

Lord Halifax, a cabinet member and soon to become foreign secretary, gave Hitler in a private meeting the impression that Britain would allow him a free hand in Eastern Europe to right the wrongs of the Versailles Treaty and restore German-speaking minorities to the homeland. Shortly after the British ambassador to Germany reiterated to Hitler the same line. After all the British and French governments had accepted his march into Austria.

“At first”, wrote Liddell Hart, “Hitler did not think of moving against Poland- even though she possessed the largest stretch of territory carved out of Germany after World War I”. He felt he owed Warsaw one because Poland had ignored the Allies’ concerns and exploited the chance to seize a slice of Czech territory, thus according Hitler’s seizure of Sudetenland, the German-populated region of Czechoslovakia, some legitimacy.

All that Hitler wanted from Poland was that she hand back the German populated port of Danzig, awarded her in the Treaty of Versailles at the end of the First World War. Germany’s incorporation of Danzig was a territorial claim that every government of the Weimar Republic had put on its agenda.

But the government in Poland was obstinate, a national trait that still exists, as has been clear in the last few years with its fraught and difficult relationship with the European Union to which it belongs. The Poles had an inflated sense of their own strength and bargaining power, and still do. They regarded themselves as one of the Great Powers.

Hitler believed, such, in his mind, was the justice of his viewpoint, that Warsaw would eventually come around. As late as March 25, 1939, Hitler told his Army Commander in Chief that he “did not wish to solve the Danzig problem by the use of force.” On March 10 Chamberlain privately expressed the view that the prospects for peace were better than ever. But no effort was made to use the time to think through a compromise, for example – this is my belated suggestion – allowing Danzig city, with its population 90 per cent German, self-government whilst allowing the rest of the territory of Danzig with its 200 towns and villages to remain under League of Nations protection, albeit with Poland still having rights over communications, railways and port facilities and to continue the customs union, and to which Germany could have been allocated a 50 per cent part ownership. The former German citizenship of most of the population should have been returned.

Then Chamberlain did a somersault. On March 29 he sent Poland an offer to support her against “any action which threatened Polish independence, and which the Polish government accordingly considered it vital to resist.” This was grist to the mill to Warsaw’s hard-liners. Poland, in effect, was given a carte-blanche to set British policy towards Gdansk, the Polish corridor and Poland itself. Poland refused to negotiate the slightest of compromises with Hitler.

Chamberlain’s startling change of mind was brought about by events in Czechoslovakia. Earlier in the autumn 1938, when the Munich agreement was made, he had pledged to guarantee Czechoslovakia against aggression. But in March 1939 he told the House of Commons that he considered Slovakia’s breakaway had annulled the guarantee. (Ironically the Poles had decided to support the breakaway.) It was known that privately Chamberlain thought that Hitler had a good case about Czechoslovakia and its claim to the German-speaking province of Sudetenland.

When Hitler’s troops marched into Prague it was a total surprise to almost everyone that Chamberlain chose to make clear that Britain would block any further moves by Hitler. All over the world well-informed people were amazed. Poland and Danzig came into focus.

Liddell Hart writes: “It is impossible to know what was the predominant influence on Chamberlain’s impulse – the pressure of public indignation which was high, or his own indignation, or his anger at having been fooled by Hitler at Munich, or his humiliation at having been made to look like a fool in the eyes of his own people.”

On September 1, 1939 the German armies invaded Poland. Two days later the British government declared war supposedly to aid Poland to hang on uncompromisingly to Gdansk, which few British, French or Americans had ever heard of a few months earlier. Six hours later, the French government decided to follow the British lead. The Second World War was launched.

Polish intransigence was the root cause. Chamberlain’s ineffective, volatile, leadership and a roused British opinion fanned by Churchill was the gunpowder. Hitler, initially unenthusiastic about fighting Poland but thwarted over his demands for Gdansk, pulled the trigger.

Later Hitler attacked the Soviet Union, and that was his undoing. Hitler lost the war. On June 24, Russian troops march in parade in front of the Kremlin to celebrate its end.

Home » WWII: Flawed And Ignorant Thinking In Both Russia And The West – OpEd