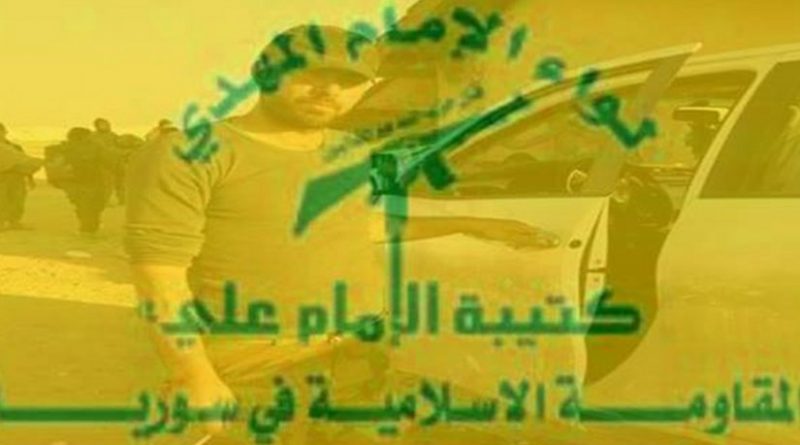 An emblem of Liwa al-Imam al-Mahdi (The Imam Mahdi Brigade): “Liwa al-Imam Mahdi: The Imam Ali Battalion. The Islamic Resistance in Syria.” Note the classic extended arm and arm associated foremost with Hezbollah and the Iranian Revolutionary Guard Corps. The quotation above the rifle reads: “Indeed the party of God are the ones who overcome” (Qur’an 5:56), a play on ‘Hezbollah’ (The party of God).

The Syrian civil war has seen the rise of a number of formations that promote the idea of building a native Syrian Muqawama Islamiya (‘Islamic Resistance’) and Hezbollah. Examples include Quwat al-Ridha (recruiting mainly from Shi’a in the Homs area), the National Ideological Resistance (based in Tartous/Masyaf area), the Ja’afari Force (recruiting mainly from Damascene Shi’a) and al-Ghalibun. Liwa al-Imam al-Mahdi, referring to the twelfth Shi’i Imam, is another group along these lines. For comparison, the National Ideological Resistance also has the label Jaysh al-Imam al-Mahdi (The Imam Mahdi Army).

The commander added that the group has participated in a number of battles, including Deraa, Quneitra, Ghouta, Aleppo and the Ithiriya-Raqqa route. Some of these operations (e.g. fighting in south Aleppo countryside and positions on the Ithiriya hills) have been mentioned on social media. Abu Hadi, the leader of the al-Hadi Battalion. His real name appears to be Rani Jaber and he is Syrian (specifically from Deraa). Note his Liwa al-Imam al-Mahdi armpatch. The al-Hadi Battalion claims at least two squadrons: the first led by ‘al-Saffah’ and the second led by ‘Abu Ali Karar.’ Fighters posing with the flag of Liwa al-Imam al-Mahdi (The Imam Ali Battalion). Identical with the emblem at the top of the article. Liwa al-Imam al-Mahdi (al-Hadi Battalion) fighters. Note the portrait immediately behind them featuring the Syrian flag design. Portrait on top: “Come and behold me, for I am the sister of Hussein. At your service, oh Zaynab” (latter phrase in Arabic- Labbayk ya Zaynab– referring to Sayyida Zaynab, a central figure in Shi’i jihadi discourse on account of the concept of defending her shrine in the Damascus area). The leader of the al-Hadi Battalion with a sword on the design of Imam Ali’s Dhu al-Fiqar. The text inserted into the photo reads: “Liwa al-Mahdi: remaining on the pledge, al-Hadi Battalion.”

In total, Liwa al-Imam al-Mahdi’s contribution to the fighting in Syria seems similar in scale to that of the Ja’afari Force and the National Ideological Resistance. Al-Hajj Waleed gave his toll of killed (‘martyrs’) and wounded at 25 and 55 respectively. Thus, the military capabilities of these groups should not be exaggerated, but it is apparent how Hezbollah is trying to project influence into Syria through the creation of multiple formations and brands in order to recruit Syrians.