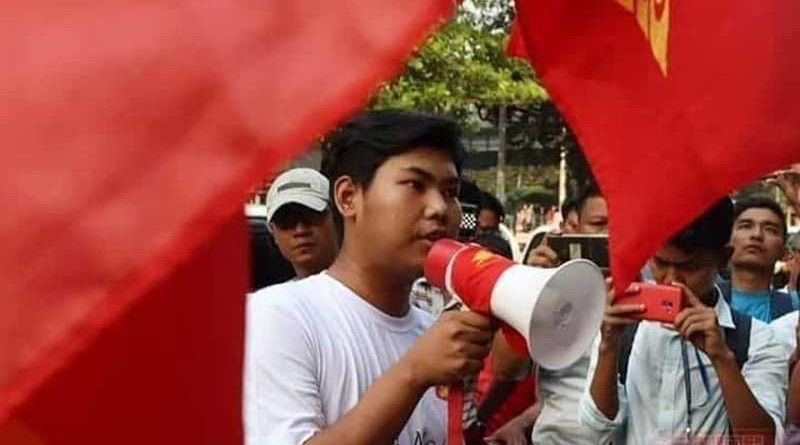 The Kamayut Township Court has sentenced two Arakanese student activists charged under Section 19 of the Peaceful Assembly Law to one month in prison.

The government and the military have been neglecting freedom of expression which is fundamental rights for everyone without taking responsibility and accountability.

In a statement following the verdict, the Arakan Students’ Union (Universities – Yangon) said the government and the military were neglecting freedom of expression, a fundamental right for all.

The Arakan Students’ Union (Universities – Yangon), Yangon University of Economics Students’ Union (Ywarthargyi) and the All Burma Federation of Student Unions staged a protest against the government in front of Hledan Center in Kamayut Township on February 23, demanding an end to the months-long internet shutdown in Arakan and Chin states. The protestors also called for accountability in the artillery shelling of a primary school in Buthidaung Township, as well as for international and domestic press to be permitted greater access to Arakan State.

The Kamayut police opened a case against nine students from multiple student unions who were involved in the protest under Section 19 of the Peaceful Assembly and Peaceful Procession Law and sentenced seven of the nine students to one month in prison on March 25. The remaining two students were the two young men sentenced on Thursday.

On June 21, 2019, the government blocked mobile internet access in eight Arakan State townships, as well as Paletwa Township in Chin State, where hostilities are ongoing between the military and the Arakan Army.

The government lifted the internet shutdown in Maungdaw Township on May 3, but more than 1 million people remain without internet access in the other affected townships.