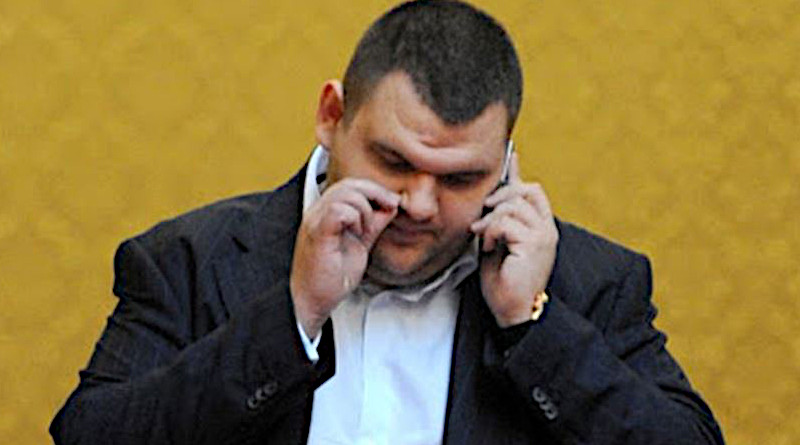 (RFE/RL) — Delyan Peevski is a powerful businessman, media mogul, and lawmaker from Bulgaria’s opposition Movement for Rights and Freedom (DPS).

A central figure in the country’s business and political scene for years, Peevski is now at the center of political allegations that led Prime Minister Boyko Borisov to reshuffle his cabinet this week.

Following two weeks of anti-government protests and claims that the ruling GERB party is controlled from behind the scenes by Peevski and the DPS, Borisov on July 23 announced he was replacing his ministers of the interior, economy, finance, and tourism.

GERB’s regional coordinators announced before the vote that they had demanded Borisov replace his interior, economy, and finance ministers.

A July 15 statement from the GERB party said the dismissals were necessary to “eliminate insinuations that GERB and the three are directly controlled by the DPS and Peevski.”

President Rumen Radev, who is backed by the BSP, has charged that a “mafia” controls Borisov’s government and the country’s notoriously politicized judiciary.

Borisov fully rejects the president’s claims. But on July 16, the prime minister used the nickname “Shishi” to identify the key figure in the allegations of DPS control.

Borisov also suggested that the previous BSP-DPS coalition government had been under the control of “Shishi.” Asked by RFE/RL to clarify those remarks, Borisov’s press office said he was referring to “Mr. Peevski.”

“Shishi” comes from the Bulgarian word for “potbelly” and the nickname is used on Bulgarian social media to refer to Peevski. But Borisov’s remarks were the first time a Bulgarian leader uttered the nickname in a public statement.

Hristo Ivanov, leader of the rival opposition coalition Democratic Bulgaria, charges that some of Borisov’s ministers and the judiciary are stooges chosen by Peevski and his party.

According to Ivanov, Peevski has used his clout from behind the scenes to pressure the GERB-led government into appointing his choices for ministry and judicial posts — including the prosecutor-general, Ivan Geshev, and other prosecutors.

Ivanov kick-started Bulgaria’s recent wave of anti-government protests on July 7 when he live-streamed his attempt to land a boat on a closed-off public beach along the Black Sea coast near the summer home of the retired DPS founder Ahmed Dogan.

Ivanov was turned back by guards that, according to Radev, were from the National Protection Service (NSO), which is responsible for protecting the president, prime minister, and other high-ranking public officials.

Radev says the NSO has no mandate to protect former politicians like Dogan. And Ivanov claims the incident highlights covert links between Borisov’s government and the opposition DPS.

Street demonstrations spread after prosecutors on July 9 raided the offices of Radev’s presidential aides in Sofia for what they said was an investigation into influence peddling and disclosure of state secrets.

Protesters say the raids are part of a long history of abuses by GERB officials and politicized prosecutors who target their rivals.

Radev in 2019 had tried to block the government’s appointment of Geshev as prosecutor-general amid street protests claiming he would do little against high-level government corruption.

The protesters have vowed to continue demonstrating until Borisov’s entire government resigns along with Geshev.

The DPS claims to represent the interests of Bulgaria’s ethnic Turks and other minorities.

It was founded in 1990 by Dogan, at the time a dissident leader of ethnic Turkish Bulgarians whose rights had been stripped away by the forced assimilation policy and mass expulsions in the 1980s under communist dictator Todor Zhivkov’s regime.

Dogan has been credited by U.S. diplomats with helping Bulgaria defuse significant potential for ethnic strife in 1990 by his willingness to reach a political compromise with former Bulgarian Communist Party officials in the renamed BSP.

Rights and freedoms stripped from ethnic Turks and other Muslim minorities under those policies were restored after that deal was reached, along with basic rights for all Bulgarians.

Bulgaria has since recognized the communist-era crackdown on the country’s Muslim minorities as an act of ethnic cleansing.

Even in opposition, the DPS has historically held considerable political sway as a swing-vote bloc in parliament.

With 25 lawmakers currently in the 240-seat National Assembly, the DSP continues to hold that clout as Bulgaria’s third-strongest political party behind GERB and the BSP.

Dogan officially retired as DPS chairman in 2013. But he is still the party’s “honorary chairman” and remains one of the country’s most powerful political figures.

In 2014, Borisov described Dogan as the “best politician” in Bulgaria, citing his ties to a powerful private media group and key judicial figures. “Dogan was the first to realize that if he had a media empire and control over the judiciary, he could rule” without formally being in power, Borisov told the news website Mediapool.bg in 2014.

The “media empire” Borisov referred to is that of the 39-year-old Peevski, described in 2016 by Radio Bulgaria as the country’s “undisputed media mogul,” with control over 20 newspapers, a private TV channel, and news websites.

Peevski started his political career in 2001 at the age of 21 as the youngest member of former Bulgarian King Simeon II’s government. Later, he joined the DPS and represented the party as the deputy head of the Emergency Situations Ministry in 2005 as a member of Dogan’s party.

As a favored up-and-coming protege of Dogan, Peevski soon built up his business and media holdings, while holding various public offices and winning a seat as a DPS deputy in parliament.

In 2013, he was appointed by a BSP-DPS coalition government as the head of the State Agency for National Security. But he resigned from that post after just one day amid mass protests against the appointment.

By 2016, Peevski reportedly owned several construction companies and allegedly was behind shadowy offshore companies that own Bulgartabac, the country’s largest manufacturer and seller of tobacco.

Bulgartabac has been accused by Turkey’s Financial Crime Investigation Board and the Turkish government of being one of the biggest cigarette-smugglers in Turkey.

Ankara has also accused Bulgartabac of being closely linked to the banned Kurdistan Workers Party (PKK), which is on the European Union’s list of terrorist organizations.

Reporters Without Borders (RSF) says a cluster of companies controlled by Peevski account for some 80 percent of the print media in Bulgaria, as well as private television and websites.

“Corruption and collusion between media, politicians, and oligarchs is widespread in Bulgaria,” the Paris-based media watchdog says. “The most notorious embodiment of this aberrant state of affairs is Delyan Peevski, who ostensibly owns two newspapers (Telegraph and Monitor) but also controls a TV channel (Kanal 3), news websites, and a large portion of print media distribution.”

Meanwhile, RSF says, Borisov’s government “continues to allocate EU and public funding to media outlets with a complete lack of transparency, with the effect of encouraging recipients to go easy on the government in their reporting, or to refrain from covering certain problematic stories altogether.”

RSF also says that “judiciary harassment of independent media” has been increasing in Bulgaria under Borisov’s government.

With reporting by RFE/RL’s Bulgarian Service

Home » Who Is Bulgaria’s ‘Potbelly’ And Why Do People Claim He Controls The Government? – Analysis