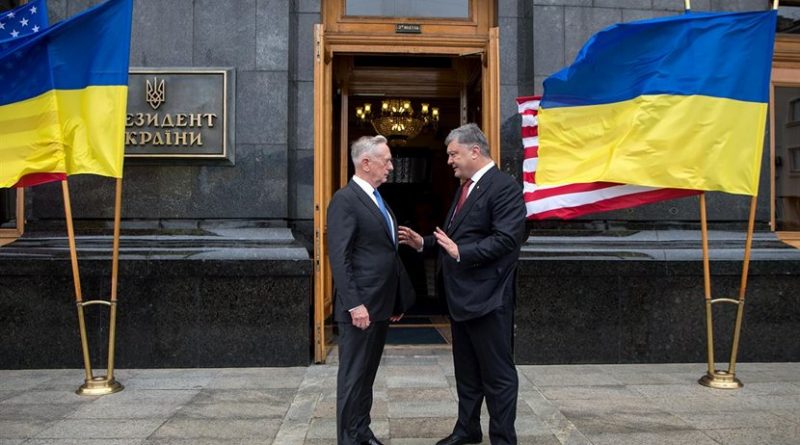 Standing with Ukraine President Petro Poroshenko on Thursday morning on that nation’s independence day, US Defense Secretary Jim Mattis said the United States stands with Ukraine in all things.

Mattis is visiting Ukraine as part of a trip that also included prior stops in Jordan, Iraq and Turkey to reaffirm the U.S. commitment to strategic partnerships, discuss the campaign to defeat the Islamic State of Iraq and Syria and bolster America’s commitment to NATO partnerships.

“We support you in the face of threats to sovereignty and territorial integrity, and international law and the international order, writ large,” the secretary said during a press conference with Poroshenko in Kyiv.

Mattis said the United States does not and will not accept Russia’s seizure of the Crimea through which they sought to redraw international borders by force, undermining the sovereign and free nations of Europe.

“Russia put its reputation on the line when it accepted the [2015] Minsk ceasefire agreement, which called for an immediate ceasefire, withdrawal of all heavy weapons, and [granting] the Organization for Security and Cooperation in Europe unfettered access under the Minsk agreement,” Mattis said.

In 1994, Russia signed the Budapest Memorandum on Security Assurances alongside U.S. and U.K. officials. The agreement assured Ukraine that all parties would respect its independence, sovereignty and existing borders, and Russia promised to refrain from threatening or using force if Ukraine gave up its large stockpile of nuclear weapons.

Then in 1997, the presidents of Russia and the United States and the leaders of NATO member-states signed the “Founding Act on Mutual Relations, Cooperation and Security” between NATO and the Russian Federation.

Under this agreement, the secretary said, Russia and NATO agreed to refrain from threatening or using force against each other or any other states, their sovereignty, territorial integrity or political independence.

“Unfortunately,” Mattis added, “Russia is not adhering to the letter, much less to the spirit, of these international commitments. The U.S. and our allies will continue to press Russia to honor its Minsk commitments, and our sanctions will remain in place until Moscow reverses the actions that triggered them.”

Mattis said President Donald J. Trump has made it clear that the United States remains committed to diplomatic efforts to resolve the conflict in eastern Ukraine.

And Secretary of State Rex Tillerson said in July that U.S. goals are to restore Ukraine’s sovereignty and territorial integrity and to seek the safety and security of all Ukrainian citizens regardless of nationality, ethnicity or religion, Mattis noted.

“We in the United States understand the strategic challenges associated with Russian aggression,” Mattis added. “Alongside our allies we remain committed to upholding the widely accepted international norms that have increased global stability since the tragedy of World War II.”

Mattis said the United States continues to support Ukraine and remains committed to building the capacity of Ukraine’s armed forces to defend that country and protect the Ukrainian people.

“We applaud the Ukraine’s commitment to reform and to modernize its defense sector according to NATO standards,” Mattis said.

He added, “This will make Ukraine’s forces more operationally effective as well as more effective protectors of the Ukrainian people, and we look forward to the full implementation of NATO standards in the midst of this conflict you’re currently fighting.”

The United States and Ukraine are cultivating a lasting strategic partnership 25 years in the making, built on common security interests and shared principles, the secretary said.

One thought on “Mattis Says US, Ukraine Continue To Build Lasting Strategic Partnership”