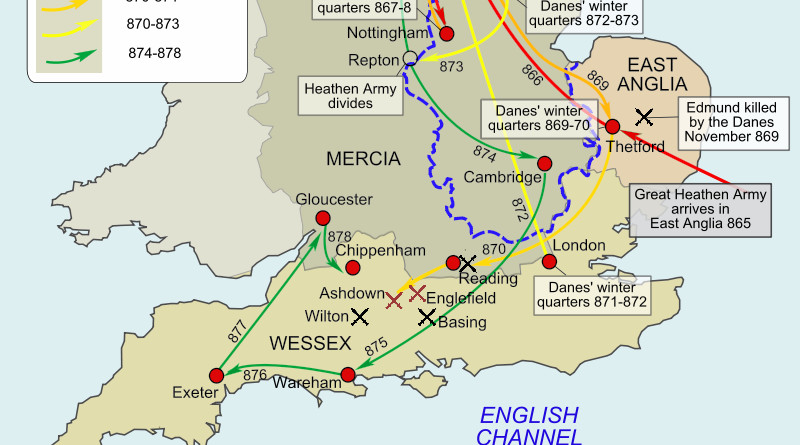 Detail of map of the route taken by the Viking Great Heathen Army which arrived in England from Denmark, Norway, and southern Sweden in 865. Credit: Wikipedia Commons

Alfred the Great, King of Wessex from 871 and King of the Anglo-Saxons from 886 to 899, is widely touted as establishing England’s first Royal fleet but research led by Flinders Medieval Studies PhD candidate Matt Firth has found evidence that the Anglo-Saxons’ first recorded naval victory occurred 20 years before Alfred was crowned King of Wessex and 24 years before his first recorded naval victory.

The research – Kingship and Maritime Power in 10th?Century England, by Matthew Firth and Erin Sebo – has been published in the International Journal of Nautical Archaeology.

“The nationalistic rhetoric that as grown up around the Royal Navy and its central role in British Empire identity since at least the 18th century has given rise to some questionable ‘facts’ around its origins,” says Firth.

“The idea that Alfred founded the navy is widespread – and the claim has been uncritically reproduced by such reputable authorities as the National Museum of the Royal Navy, Encyclopædia Britannica and BBC’s history webpage.”

Firth and Dr Erin Sebo from Flinders University’s College of Humanities, Arts and Social Sciences embarked on studies to identify how important naval power was to early medieval kings, and began finding evidence to question Alfred the Great’s status as the founder of the Royal Navy.

Using a combination of tenth-century historical texts and the growing archaeological evidence for medieval ship design, the new research shows that Alfred was not the first English monarch to coordinate a fleet to defend the country against Viking attack.

The Anglo-Saxon Chronicles report an engagement in 851 involving an ealdorman Elchere and King Æthelstan of Kent (839-c.853), who reputedly defeated a Viking force near Sandwich – the first recorded instance of a victory for an English fleet. It implies that a tradition of defensive naval action existed from at least the reign of Alfred’s father, Æthelwulf of Wessex (839-858).

The first recorded naval engagement of Alfred’s reign is an attack on a fleet of seven ships in 875; the second being a skirmish with a flotilla of only four vessels in 882.

There is also evidence that the legend bestowed on Alfred the Great as a naval visionary has greatly elevated his capabilities and successes at sea.

“Alfred’s ship designs, as described in the records, were impractical and failed as a maritime force in its first naval battle against more experienced Viking sailors,” says Firth.

Maritime power was important to good kingship, but there is little evidence of continuity between the ad hoc fleets of the 10th-century and the emergence of a Royal Navy.

“Suggestions of vast patrol fleets maintained by his successors are both logistically and technologically impossible,” says Firth.

The new research also sheds fresh light on the famous burial ships of medieval England and Scandinavia – a topical archaeological issue because of new discoveries in Iceland and Norway in the past 18 months.

Similarities in burial configuration and in ship design across these regions demonstrate ongoing cultural contact, resulting in comparable technological innovations in warship design between England and Scandinavia, and common cultural attitudes to the importance and prestige of sea-power.