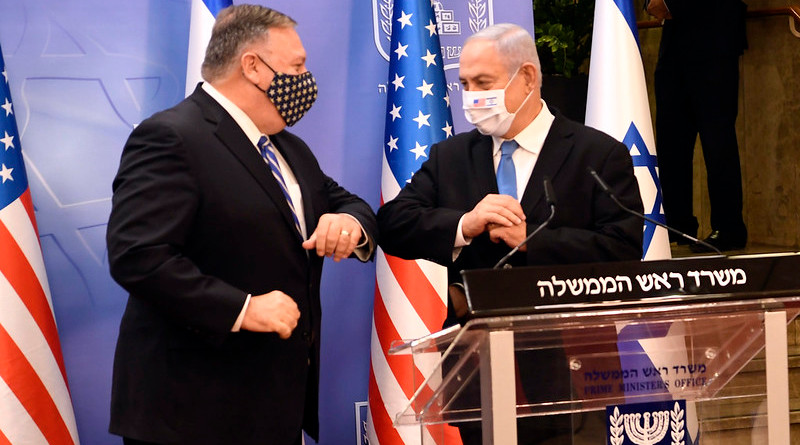 “The United States has a legal requirement with respect to qualitative military edge. We will continue to honor that,” said Pompeo after his meeting with Israeli Prime Minister Benjamin Netanyahu in Jerusalem.

“But we have a 20-plus year security relationship with the United Arab Emirates as well, where we have provided them with technical assistance and military assistance,” he added.

The top U.S. diplomat’s trip to the Middle East comes after Washington helped broker the Israel-UAE deal earlier this month, a pact that Netanyahu said heralds a new era for the region.

But Palestinian Authority President Mahmoud Abbas said the deal is a “betrayal” of Palestinians. The Israel-UAE deal is seen as breaking a tradition among most Arab countries not to make peace with Israel until Israel and the Palestinians make peace.

Pompeo is also traveling to Bahrain, UAE and Sudan from August 23-28, with Iran, regional security issues, and “establishing and deepening Israel’s relationships in the region” high on the agenda.

The U.S. and Israel are hopeful that other Arab nations will follow the UAE in normalizing relations with Israel.

“We discussed this and I hope we’ll have good news in the future, maybe in the near future,” said Netanyahu on Monday.

Bahrain and Oman are seen as the next Gulf countries to establish diplomatic ties with Israel.

Monday, British Foreign Minister Dominic Raab renewed a call for a dialogue between governments of Israel and the Palestinian Authority.

“Israel’s suspension of annexation is an essential step towards a more peaceful Middle East. It is important to build on this new dynamic, and ultimately only the government of Israel and the Palestinian Authority can negotiate the two state solution required to secure lasting peace,” said Raab in a statement.

Raab met with Pompeo on Monday in Jerusalem and is set to meet with Netanyahu and Abbas this week.

Netanyahu has praised the Trump administration for its efforts to initiate a return of the international sanctions against Iran that were lifted under the 2015 agreement restricting the country’s nuclear program.

The United States withdrew from the agreement, known as the Joint Comprehensive Plan of Action, and other signatories, including Britain, France and Germany, said because the U.S. walked away they could not support its sanctions action.