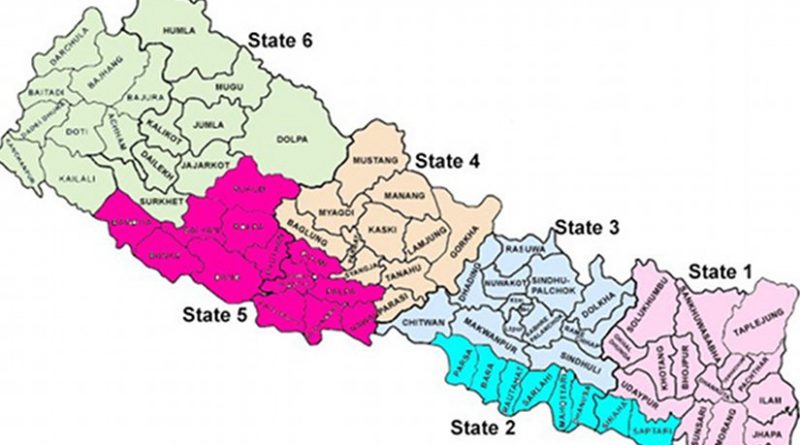 A new Constitution was promulgated in Nepal on 20 September 2015. It has failed to satisfy the Madheshis and Tharus who constitute 70 per cent of the Terai population, who regard the formation of seven federal provinces as per the Constitution as grossly unfair to them. Only eight districts in the Terai region, from Saptari in the East to Parsa in the West, have been given the status of a province (State 2, see Map below); the remaining 14 districts are to be joined with the hill districts, with the sole purpose of converting the local people into a minority. The Madheshis and Tharus were sidelined in the entire constitution making process due to prevailing distrust towards them among the mainstream political parties. Of course, the Bijay Kumar Gachhadar-led Madhesi Janaadhikar Forum–Democratic was initially involved in the constitution drafting process; but later on it also had no option but to quit the alliance as its point of view was not entertained.

Consequently, none of the major Madhesh-based parties signed the Constitution, which has serious flaws. The new Constitution has a provision for a 165-member Parliament, but the constituencies have been demarcated in such a way that the people of the hill and mountain region would get 100 seats, despite the fact that their share in Nepal’s total population is less than 50 per cent. On the other hand, the Terai region constituting over half of the country’s population has been allocated only 65 seats.

Because of the insensitivity shown towards the demands of the Madheshi parties, a call was given by the Unified Democratic Madheshi Front and Tharuhat/Tharuwan Joint Struggle Committee for an indefinite strike in Terai beginning August 8. Security Forces personnel used excessive force to suppress the agitation. Even the army was mobilized for this purpose. But the situation deteriorated fast. During the last month and half of protests, over 46 people, including 10 security personnel, have been killed. Besides, hundreds of protesters have been injured. Almost all the Terai districts have turned into war-like zones.

Immediately after the promulgation of the Constitution, the ruling political parties including Nepali Congress and CPN-UML celebrated “Diwali”, while the Madheshi political parties and Tharuhat Struggle Committee observed it as a black day. Both within and outside the country, the new Constitution was welcomed by one community, while it was burnt by others. Nepal is now widely polarised between those who support and those who oppose the Constitution. China, Pakistan and a few other countries have welcomed the new Constitution, but India has indirectly shown its displeasure over the development, which is worrisome.

The changing demography of Terai deserves critical scrutiny in light of the developments taking place in the region today. Until 1954, the Madheshis and the Tharus formed 94 per cent of the total population in the Terai region. But since the 1970s, the state— during the years of monarchy— helped hundreds of thousands of hill migrants to settle in Terai mostly by clearing the thick forest land. For this, even resettlement companies were set up. Though landlessness among the Madheshis is common, none of them got any piece of land as part of the resettlement policy adopted by the state.

Those who suffered the most due to the state-sponsored migration and settlement of population in Terai were the tribal groups like the Tharus, the Rajbanshis and the Satars. Land belonging to many of these people was confiscated on one or other excuse for distribution among the migrants. A sizeable chunk of the local people were forced to migrate to India. But those who stayed at home in Terai were virtually made Kamaiyas (paupers) whose only means of survival was to work as domestic help in the houses of the hill migrants. As if this were not enough, in the early 1980s a Commission on Internal and International Migration was constituted under Hark Gurung. The Commission recommended that whatever remaining forest that was left along the East West Highway be cleared with a view to settle the hill migrants.

Both under the rules of the Kings and the Ranas, large tracts of land in Terai were gifted away to civil servants, army officers and family members of the ruling class through the infamous system of Birta. The Kings of Nepal advocated a policy of not employing the Madheshis in the civil services. This deficit of trust towards the Madheshis and the Tharus was one of the major reasons why their presence in the civil services, judiciary and security agencies have remained minimal. Even their presence in corporations, industries and private sector agencies have been far from satisfactory. Until the mid-1950s, the Madheshis had to receive permits from the government authorities to enter Kathmandu, the capital city! Even in matters concerning the grant of citizenship, they were discriminated against. The Madheshis comprise the bulk of such stateless citizens in Nepal even to this day. All the major political parties usually field hill-elites as their candidates in the Terai region during the elections. They would never allow any Madheshi as their candidate in the hill constituencies.

In order to get rid of discrimination, the Terai Congress in 1950 gave a call for a federal state for the area situated in the Terai belt. But the idea could not gain much traction as the party was defeated in the 1959 General Elections. After the restoration of multi-party democracy in 1990, Nepal Sadbhavana Party was formed to protect the interests of the Madheshis. This party also echoed its voice for a federal state. Later on, the idea of federalism was picked up by the Communist Party of Nepal (Maoist). Subsequently, in 2007, there was a major Terai uprising, which was controlled only when the government made a formal agreement with the Madheshi leaders for the formation of a single autonomous Madhesh Pradesh with the right to self-determination.

From Disarray to Unity

Despite the overwhelming size of population of the Madheshis and Tharus in Terai, they could get only 10 per cent seats in the 601-member Constituent Assembly (CA)-2 in the December 2013 elections. Many of the Madheshi leaders were defeated in CA-2 elections because they failed to address the people’s problems. Out of lust for money and power, they did not hesitate to fragment the parties. During the CA-1 elections in 2008, only three Madhesh-based parties had contested the elections and hence they had a substantial presence in CA-1. In contrast, during the CA-2 elections in 2013, there were 13 Madhesh-based parties. Though both during CA-1 and CA-2 elections, the overall voting percentage for the Madhesh based parties remained almost the same— about 12 per cent— Madhesh leaders lost the elections because their votes were divided, making it easier for non-Madheshi leaders to win.

Nevertheless, the Madhesh-based parties did not learn any lesson from the election debacle and they could not come together to form a united front to protect their interests. By the time they formed the Unified Democratic Madheshi Front this year, it was too late to exhibit their strength. The three major political parties, including the NC, CPN-UML and UCPN-Maoist, took advantage of this split. Because they had 90 per cent seats in the CA-2, they excluded the Madheshi parties in the constitution-making process. But this was a major blunder. It was forgotten that the Madheshis and the Tharus have always been humiliated ever since the central and eastern parts of Terai were gifted away by the British East India Company to Nepal partly after the Sugauli Treaty of 1816 and partly after the Sepoy Mutiny (1857) in 1860. The hill elites always doubted the loyalty of the Madheshis towards the nation. This distrust towards the Madheshis and the Tharus provided these groups with ample reason to unite and protest against the constitution when a call was given for an indefinite strike.

The impact of the ongoing Madheshi agitation in Nepal as a whole in general and in the Terai region in particular is quite severe. For more than one-and-a-half months now, life in the Terai region has been paralysed. All the educational institutions, hospitals, government offices, industries, banks, shops, agricultural activities and transport services have been crippled. Most of the essential items including food grains, petrol and gas are in short supply. Those who depend on daily wages for their livelihood are suffering the most. Movement of people is restricted because of continuous curfew in several places and also due to the deteriorating law and order situation. Amidst all this, unscrupulous elements hostile to India could pose a security risk by taking advantage of the open border between the two countries.

However, the government and the main political parties in Nepal are least sensitive to the needs of their own people, leave alone their concerns about security challenges such a protracted crisis could pose for Nepal and India. Instead of taking any initiative to defuse the crisis, some of them have started blaming India for the troubles in Nepal. Rumours are rife that India has imposed a blockade as trucks loaded with goods are not coming from India to Nepal. In a deliberate manner, wrong information is being fed to the people of Nepal by the media that the sealing of the border by India at certain locations has caused food scarcity in Nepal. The truth, however, is that the private trucks plying on the Indian side of the border cannot afford to cross the border and come to Nepal because of the fragile law and order situation, which is due to the mishandling of the situation by the Nepalese government.

If the government and the main political parties are really serious about defusing the present crisis, they should accept it as a political problem and take steps to ensure that Nepalese people of all ethnicities, including the Madheshis and the Tharus, develop a sense of ownership in the new Constitution. For this, it is urgently required to initiate a dialogue with the aggrieved Madeshi and Tharu political leaders and address some of the demands put out by them at the moment, as follows:

A forward looking Constitution must take adequate care to accommodate rather than leave out the genuine aspirations of a substantial cross-section of people. If such aspirations remain unmet, as the persisting movement by the people of the Terai region would indicate, the ongoing crisis may deepen causing trouble for one and all in Nepal. In such a situation, there is always a temptation to find an external scapegoat. It would require exemplary courage on the part of the Nepalese leadership to own up their mistakes and put their house in order before it is too late.

*Professor Jha is Executive Director of Centre for Economic and Technical Studies in Nepal. He has been a Visiting Fellow at IDSA. The views expressed here are his own.

Views expressed are of the author and do not necessarily reflect the views of the IDSA or of the Government of India. Originally published by Institute for Defence Studies and Analyses (www.idsa.in) at http://www.idsa.in/idsacomments/NepalsNewConstitution_hbjha_240915.html

Home » Nepal’s New Constitution: An Analysis From The Madheshi Perspective