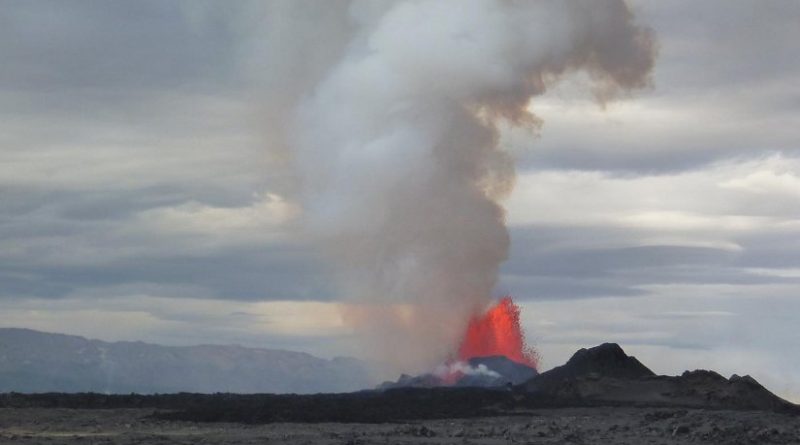 Plumes of smoke and flames rise from an eruption at Bárðarbunga volcano, Iceland, in 2014. The amount of sulphur dioxide emitted in the six-month eruption was treble that given off by all of Europe's industry. Photo Credit: Dr. John Stevenson

A huge volcanic eruption in Iceland emitted on average three times as much of a toxic gas as all European industry combined, a study has revealed.

Discharge of lava from the eruption at Bárðarbunga volcano released a huge mass – up to 120,000 tonnes per day – of sulphur dioxide gas, which can cause acid rain and respiratory problems.

The eruption last year was the biggest in Iceland for more than 200 years. It released a river of lava across northern Iceland, and lasted for six months.

Researchers hope that their study will aid understanding of how such eruptions can affect air quality in the UK.

A team of European scientists, including from the Universities of Leeds and Edinburgh and the Met Office, used data from satellite sensors to map sulphur dioxide pollution from the eruption. These were reproduced by computer simulations of the spreading gas cloud.

As well as being given off by volcanoes, sulphur dioxide is also produced by burning fossil fuels and industrial processes such as smelting. Man-made sulphur dioxide production has been falling since 1990, and was recorded at 12,000 tonnes per day in 2010.

The study, published in the Journal of Geophysical Research, was supported by The Natural Environment Research Council and the Royal Society of Edinburgh, amongst others.

Dr John Stevenson, of the University of Edinburgh’s School of GeoSciences, who took part in the study, said: “This eruption produced lava instead of ash, and so it didn’t impact on flights – but it did affect air quality. These results help scientists predict where pollution from future eruptions will spread.”

Dr Anja Schmidt from the School of Earth and Environment at the University of Leeds, who led the study, said: “The eruption discharged lava at a rate of more than 200 cubic metres per second, which is equivalent to filling five Olympic-sized swimming pools in a minute. Six months later, when the eruption ended, it had produced enough lava to cover an area the size of Manhattan. In the study, we were concerned with the quantity of sulphur dioxide emissions, with numbers that are equally astonishing: In the beginning, the eruption emitted about eight times more sulphur dioxide per day than is emitted from all man-made sources in Europe per day.”