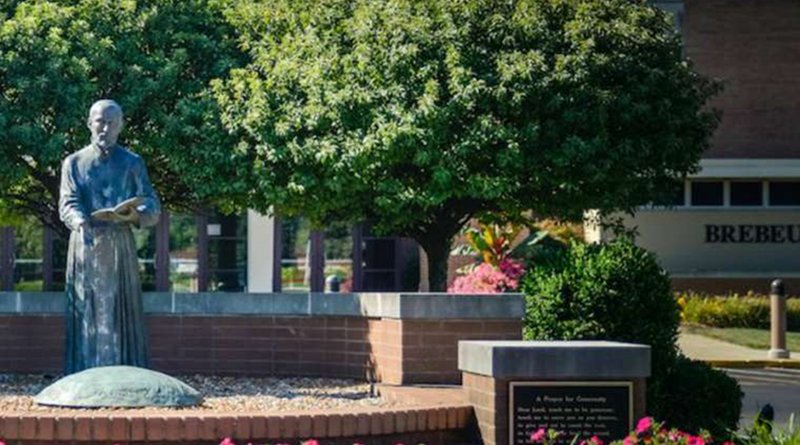 Brebeuf Jesuit Preparatory School in Indianapolis announced this week that the Vatican has suspended a decree prohibiting the school from calling itself Catholic. The announcement has led to speculation and debate about the likely outcome for an appeal filed against the decree. But the canonical realities of the case don’t support most of the conjecture.

The decree was issued by Archbishop Charles Thompson, after a disagreement between the Indianapolis archdiocese and the school over the employment of a teacher in a same-sex civil marriage. It was appealed by the Jesuit province that oversees the school.

To some Catholics, the Vatican’s decision to suspend the decree, and its eventual decision on the Jesuit’s appeal, seems to be a referendum on whether the Church’s hierarchy will defend its teaching on homosexuality. But the case is more complicated than that, and commentators reducing it to a battle over doctrine could lead Catholics into serious confusion.

In June, Archbishop Thompson announced that Brebeuf could no longer call itself Catholic after two years of talks between the school and the archdiocese broke down. The issue began when the archdiocese became aware that a teacher had entered into a same-sex civil marriage, and requested that the school not renew the teacher’s contract.

Archdiocesan officials were clear about their position.

“All those who minister in Catholic educational institutions carry out an important ministry in communicating the fullness of Catholic teaching to students both by word and action inside and outside the classroom,” the archdiocese said in a June statement.

To reflect its position, the archdiocese has instructed all Catholic schools within its boundaries to ensure that contracts and job descriptions classify teachers as “ministers,” because of their duty to teach and witness the faith, and instruction should stipulate “that all ministers must convey and be supportive of all teachings of the Catholic Church.”

“To effectively bear witness to Christ, whether they teach religion or not, all ministers in their professional and private lives must convey and be supportive of Catholic Church teaching,” the archdiocese said in June.

The archdiocesan position is not uncommon among U.S. dioceses, and its language, especially the idea of classifying teachers and other school personnel as “ministers,” seems to be informed, at least in part, by the 2012 Supreme Court decision in Hosanna Tabor v. EEOC.

That decision established that religious institutions are free to require those it recognizes as ministers to uphold religious teachings as a condition of employment. After the decision was handed down, it has become more common for Catholic institutions to delineate explicitly that school personnel are counted as “ministers,” because of their responsibility to witness to the Gospel, and that living in accord with the Church’s teaching is a condition of ongoing ministerial employment.

In Indiana, leaders at Brebeuf Jesuit Preparatory School said that accommodating the archdiocesan request would “violate our informed conscience on this particular matter,” and “set a concerning precedent for future interference in the school’s operations and other governance matters that Brebeuf Jesuit leadership has historically had the sole right and privilege to address and decide.”

That Catholic school teachers should be expected to live according to the teachings of the faith has been taught repeatedly in the educational documents of the Church’s magisterium. Any effort on the part of Brebeuf leaders to suggest that the Church should take no issue with teachers in public relationships that defy Catholic doctrine is unlikely to be successful.

But defenders of the school, and canon lawyers who have followed the case closely, tell CNA there are other issues at play in Brebeuf’s appeal to the Vatican.

Canon 805 of the Church’s “Code of Canon Law” establishes that within his diocese, the diocesan bishop “has the right to appoint or approve teachers of religion and even to remove them or demand that they be removed if a reason of religion or morals requires it.” The canon does not give the bishop the same oversight over other teachers.

The norms established by the Archdiocese of Indianapolis pertain to all teachers, not just those who teach religion. In fact, the archdiocesan policy seems to define all school teachers as teachers of religion, at least in a broad and abstract way.

It is not clear to canonists whether the Congregation for Catholic Education will decide that the Archdiocese of Indianapolis’ policy pertains to the “general regulation” of Brebeuf, or whether, in light of canon 805, it will find that the policy reaches into a matter of “internal direction,” over which the school has canonical autonomy.

Even if the Congregation decrees the latter, it could also decide that because the archbishop’s intention was in the right place, the best response is to suggest to him an amended policy that could be understood to pertain to the school’s “general regulation.”

What the Congregation decides on this legal point will have bearing on the canonical relationship between local bishops and religious orders with schools around the world. The Congregation will likely take its time coming to a conclusion.

Apart from this question, there are also canonists, even among those supportive of the archdiocesan initiative, who ask whether a bishop can legally declare that a school overseen by a religious institute will no longer be “recognized”  as a Catholic institution.

While many canonists agree that the archbishop can prohibit the school from calling itself a Catholic school, as indicated in canon 803, there are questions in play about whether the wording and form of Archbishop Thompson’s decree conform to the requirements of canon law.

There are, in short, a number of technical issues of canon law at play in the dispute between Brebuef and the Archdiocese of Indianapolis, and those issues have to do with the scope and exercise of a bishop’s authority, not with broad questions about homosexuality and Catholic identity.

This means it is entirely possible that the Congregation for Catholic Education could end with a decision that supports Archbishop Thompson in principle, while concluding that the way he went about handling the issue was canonically problematic.

In such a case, the Congregation would likely spend time trying to see whether the matter could be meted out in a more technically precise way.

But because the case is complex, and it’s not clear how the Congregation will decide on each of a set of interlocking legal questions, resolving the situation is likely to take a long time. And, most likely in recognition of that fact, the Congregation decided to suspend the archbishop’s decree until the matter has been resolved.

Among American commentators, the suspension of the decree has been characterized as a reproach to Archbishop Thompson or an indication that the Vatican plans to decide the case in the Jesuits’s favor. But considered in light of the common praxis of the Roman Curia, and the rules that govern it, those characterizations seem unfounded, at best.

Reading the tea leaves on exactly why the Congregation suspended the decree is near impossible. But there are a few points worth noting.

The first is that in canonical praxis, it is not unusual to suspend the effects of a decree when a recourse, or appeal, is being considered seriously, and when the effects of the decree are significant. In many types of cases, the law establishes an automatic suspension. In fact, sources told CNA this week that at least some Vatican officials initially thought suspension would be automatic in this case, as it is in many others. So among the likely reasons the Vatican suspended the decree is a canonical instinct among many canonists to do so when a recourse is being considered seriously.

The Congregation will want to give every indication of having been fair to both sides in this dispute, and because suspension of a decree is an ordinary canonical practice, it is also an indication of fairness.

The second point worth noting is that Thompson’s decree, which says that Brebuef will no longer be listed in the “Official Catholic Directory,” could have considerable tax consequences for the school and its Jesuit teachers, because the IRS recognizes that directory as demonstration that an entity is a tax-exempt Catholic ministry. Suspending the decree prevents the headache of resolving those tax issues while the Congregation considers the appeal.

Finally, it’s worth remembering that Thompson’s decree has practical and spiritual effect on the students at Brebeuf and their families. That the Congregation is considering the appeal suggests it thinks the legal questions in play are at least worth treating seriously. But the Church’s practice is to err on the side of the sacraments in a matter capable of question, and so it will seem to Vatican officials the most pastoral decision to allow Mass to continue at the school, for the sake of its students, as the issues are worked out.

Canonical recourses involving complex legal issues unfold at a snail’s pace. As the recourse of Brebeuf Jesuit unfolds, most of the punditry will fall along predictable partisan lines, or use each development to support preconceived conclusions. It’s worth remembering that such speculation likely indicates more about its sources than about the facts and circumstances of the case.