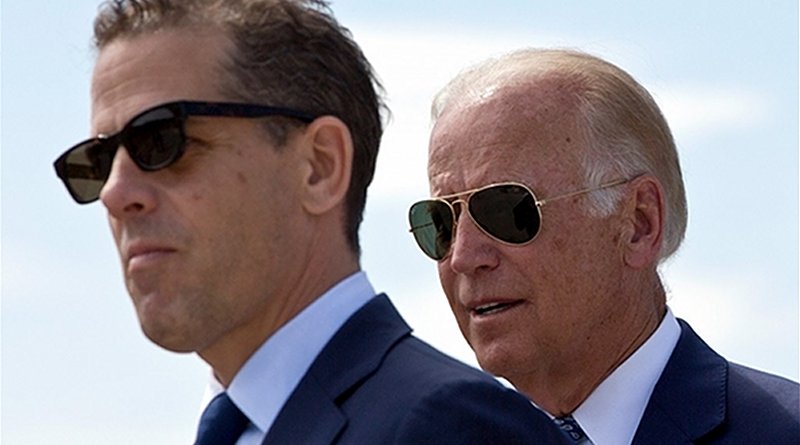 Although Hillary Clinton was regarded as “crooked,” as Donald Trump used to derisively taunt her in the run-up to the 2016 presidential elections, compared to explosive allegations leveled against Hunter Biden in the recently released interim report of the Senate Homeland Security and Finance Committees, she seems like a saint.

It’s noteworthy that the Johnson-Grassley report is simply an “interim report” pronouncing a declaratory judgment. Republican Rep. Jim Jordan on Thursday demanded answers from FBI Director Christopher Wray on what investigative steps the bureau had taken related to Hunter Biden’s business dealings in the wake of the Senate report.

Now it’s up to the FBI, the prosecution division of the Justice Department and the judicial system of the United States to further pursue the shocking allegations of financial corruption and moral turpitude leveled against the Biden family by the Senate committees.

Despite the clear guilt of the accused and gravity of offenses committed by the Biden family, one simply needs to pay attention to the news headlines during the last week to figure out the partisan slant of the mainstream media: The New York Times reported yesterday, “Republican Inquiry Finds No Evidence of Wrongdoing by Biden Family”; CNN gave the headline, “Senate GOP report attacks Bidens with previously aired allegations”; and The Politico broke the story, “GOP senators’ anti-Biden report repackages old claims.”

It’s not surprising that these widely read news outlets are complicit in the atrocious crimes of the nefarious nexus between establishment Democrats and Republicans, and America’s national security establishment.

It’s worth pointing out that there is nothing wrong with having ideological affiliations, one could be liberal or conservative depending on upbringing, personal inclinations and cognitive bias, but strictly following partisan lines, whether Democratic or Republican, in news reporting makes a mockery of the entire process of accountability, checks and balances, and the pivotal concept of independent media acting as a watchdog of political abuse of authority.

John Solomon, writing for a relatively obscure news outlet “Just the News,” published the entire charge-sheet [1] produced by the Senate committees against the Biden family:

“Perhaps the most explosive revelation was that the US Treasury Department flagged payments collected overseas by Hunter Biden and business partner Devon Archer for possible illicit activities.

“In addition, State official George Kent, one of the Democrats’ star impeachment witnesses, testified and wrote in contemporaneous memos that Hunter Biden’s role on Burisma’s board created the appearance of an ‘awkward’ conflict of interest that undercut US anti-corruption efforts in Ukraine being led by Vice President Joe Biden, the report said.

“Kent was so concerned that he canceled a State Department partnership with Burisma, reported the alleged Burisma bribe to the Justice Department, and tried to raise concerns directly to Vice President Joe Biden but was rebuffed, the report said, citing testimony and U.S. government records.

“In all, Hunter Biden and Devon Archer received more than $4 million from Burisma during a time when the firm aggressively lobbied the State Department to make long-standing corruption allegations go away, at times invoking the vice president’s son’s name for pressure.

“In addition to the over $4 million paid by Burisma for Hunter Biden’s and Archer’s board memberships, Hunter Biden, his family, and Archer received millions of dollars from foreign nationals with questionable backgrounds, the report said.

“Kent’s testimony and emails cited in the report paint a compelling portrait of the difficulties Joe Biden created by continuing to preside over Ukraine anti-corruption policy as Obama’s vice president while his son served on the board of a company under investigation for corruption and run by an oligarch named Mykola Zlochevsky.”

A Washington Post report [2] further elaborates the nature of illicit financial transactions with foreign companies and nationals conducted by Hunter Biden during his father’s tenure as the vice president:

“The Senate GOP report suggests that while his father was vice president, companies associated with Hunter Biden received $3.5 million from Russian tycoon Yelena Baturina, who is the widow of former Moscow mayor Yuri Luzhkov and is a member of Kazakhstan’s political elite.

“The records in the report also detail a number of transactions involving Ye Jianming, a Chinese oil tycoon who was taken into custody by Chinese authorities in 2018 after one of his top aides was convicted in a US federal court of bribing officials in Chad and Uganda for oil contracts.”

In August 2017, a subsidiary of Ye’s company wired $5 million into the bank account of a US company called Hudson West III, which over the next 13 months sent $4.79 million marked as consulting fees to Hunter Biden’s firm, the report said. Over the same period, Hunter Biden’s firm wired some $1.4 million to a firm associated with his uncle and aunt, James and Sara Biden.

In a 2019 interview [4] with the New Yorker, Hunter Biden said he was working with Ye to identify investments in the United States, including a substantial liquefied natural gas investment in Louisiana. But he said the deal fell through after Chinese authorities detained Ye.

Hunter Biden told the New Yorker he did not consider Ye to be “a shady character at all” and said the situation was “bad luck.” Although Hunter Biden didn’t consider Ye Jianming “a shady character at all,” he was such a swindler that when Chinese authorities detained him in early 2018, his wealth had mushroomed from $35 million in 2009 to $37 billion in 2016, a time period incidentally coinciding with Joe Biden’s vice presidency.

In an interview [5] with Axios late last year, Joe Biden pledged that his family wouldn’t engage in any foreign business activities if he were elected president. “They will not be engaged in any foreign business, because of what’s happened in the Trump administration,” the former vice president said. “No one is going to be seeking patents for things from China. No one is going to be engaged in that kind of thing.”

Once bitten, twice shy. If Joe Biden couldn’t keep a leash on his prodigal son’s illicit financial transactions spanning the globe during his term as the vice president, how could Americans trust that he wouldn’t abuse the authority for pecuniary gains if elected president?

The most shocking revelations in the Johnson-Grassley report, however, are regarding Hunter Biden’s moral turpitude:

“There is extensive public reporting concerning Hunter Biden’s alleged involvement with prostitution services. Records on file with the Committees do not directly confirm or refute these individual reports,” investigators wrote. “However, they do confirm that Hunter Biden sent thousands of dollars to individuals who have either: 1) been involved in transactions consistent with possible human trafficking; 2) an association with the adult entertainment industry; or 3) potential association with prostitution. Some recipients of those funds are Ukrainian and Russian citizens.

“The records note that it is a documented fact that Hunter Biden has sent funds to nonresident alien women in the United States who are citizens of Russia and Ukraine and who have subsequently wired funds they have received from Hunter Biden to individuals located in Russia and Ukraine. The records also note that some of these transactions are linked to what ‘appears to be an Eastern European prostitution or human trafficking ring,” the footnote added.

The revelations don’t come as a surprise, though, because the previously stated New Yorker interview [4] of Hunter Biden in July last year serves as a scathing indictment of his moral depravity: “Hunter Biden has struggled for decades with alcohol addiction and drug abuse; he went through an acrimonious divorce from his first wife, Kathleen Buhle Biden; and he had a subsequent relationship with Beau’s widow, Hallie. He was recently sued for child support by an Arkansas woman, Lunden Alexis Roberts, who claims that he is the father of her child.”

An August 21 article [2] from the Business Insider further illustrates Hunter Biden’s rockstar lifestyle: “Hunter Biden’s tumultuous personal life became tabloid fodder during and after his father’s time with the administration. He sparked confusion when he, then 44 years old, enlisted in the Navy Reserves in 2012, less than two years before reports broke that the Reserve discharged him in 2014 after he tested positive for cocaine.”

Despite Hunter Biden’s publicly acknowledged despicable vices, including substance abuse, extramarital affairs and financial corruption, the mainstream media seems to be giving credit to Democratic presidential candidate Joe Biden for helping his son get through rough phases of life. Had Eric or Donald Trump Jr. been in his place, would the media still have been as sparing and sympathetic or would it have crucified Donald Trump for being a bad influence over his children?