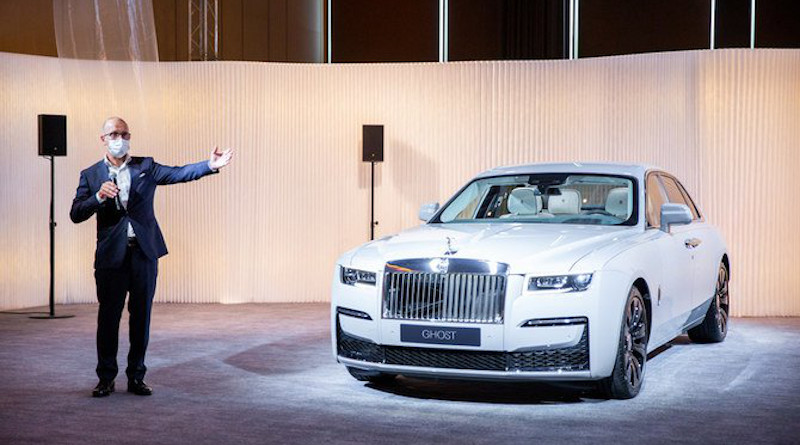 A Rolls-Royce for the COVID-19 era might be an incongruous idea, but that is what the luxury car maker has made with its new Ghost.

Not that the elite motor marque has gone anywhere near austerity in the new car, which was officially launched in the Middle East at a glitzy ceremony in Caesars Palace hotel in Dubai this week.

All the features that have made Rolls-Royce a by-word for iconic luxury are still there, and more: Deep pile carpet made from finest British wool; enough technology — much of it from the hi-tech heartland of Rolls’ German owner BMW — to launch a Mars mission; and a price tag of around 1.8 million Emirati dirhams ($490,000) that will buy you the bare minimum of customization.

But, in the words of Rolls-Royce global CEO Torsten Muller-Otvos, this version of the Ghost is in tune with the era of “post opulence.”

Apparently, Rolls’ owners wanted something that “didn’t shout, but rather whisper.”

The car that was unveiled at Caesars Palace did not so much whisper, as entice. “Come and drive me,” it seemed to be saying, in a seductive voice.

As ever with Rolls, the car looks a knockout, and you could spend a long time admiring its minimalist lines, but any red-blooded driver simply wants to get behind that wheel on an open road.

What a thrill that will be when the Rolls cognoscenti get their pre-ordered deliveries in the next couple of months. The 6.7-liter twin-turbo V-12 engine has so much power that drivers will appreciate the close control of four-wheel-drive and steering that comes as standard, as well as improved suspension. The “magic carpet” ride promises to be even smoother.

The whole car has been re-engineered from the previous Ghost, which was one of the best-selling cars in Rolls’ illustrious 120-year history, and it has some eye-catching refinements. Doors open from the inside at the touch of a button, and the “spirit of ecstasy” now slips back into the bonnet when you want, rather than into the radiator grill.

The “pantheon” grill itself can be backlit for those occasions when you might want to let other rear-view motorists know you are driving the best car on the road.

Cesar Habib, the head of the Rolls business in the Middle East, quoted founder Henry Rolls: “Small things make perfection, but perfection is not a small thing.”

The launch of a new Rolls-Royce is no small thing either. The huge number of enthusiasts in Saudi Arabia will get their chance to sample the new Ghost next month.

Home » The Seductive New Ghost: A Rolls-Royce For The Pandemic Era