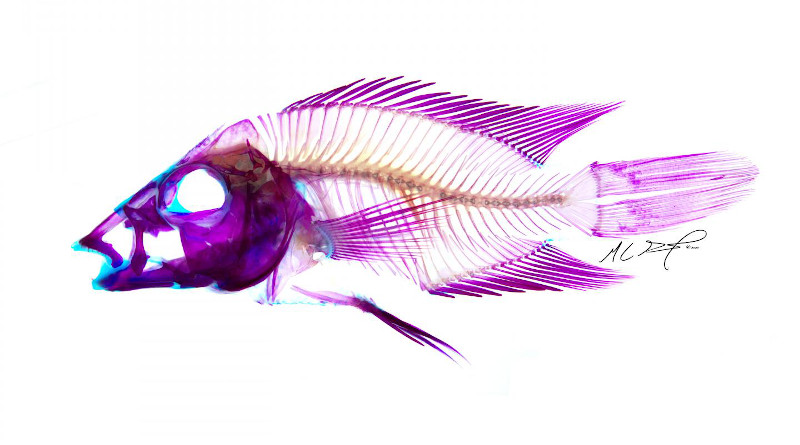 UMass Amherst biologists compared museum collections of cichlid fishes from before a dam was closed in 1984 on the Tocantins River in the Brazilian Amazon to contemporary specimens taken from the Tucuruí Reservoir by fishermen 34 years later. They tested the idea that these fish could be expected to show body shape changes - in particular jaw bones - in response to habitat and foraging behavior shifts after the dam changed the waterway. CREDIT: UMass Amherst/Albertson lab

A team of biologists led by Craig Albertson and Ph.D. student Chaise Gilbert at the University of Massachusetts Amherst report this week on their comparison between museum collections of cichlid fishes collected before a dam was closed in 1984 on the Tocantins River in the Amazon and contemporary specimens taken from the Tucuruí Reservoir by fishermen 34 years later.

Working with others in Brazil, Albertson’s team tested the idea that these fish could be expected to show changes in body shape as a consequence to shifts in habitat and foraging behavior after the dam rapidly changed environmental conditions from a clear, flowing river to a deep, murky reservoir.

“The once-historic rapids and streams that characterized the system have disappeared from the surrounding area, which in turn has affected the abundance and variety of food sources available to native fishes,” they write in Evolutionary Application this week.

Cichlid fishes are known in the scientific world for their ability to alter, in as little as a single season, aspects of body shape to match feeding conditions and other changes in the environment, Albertson says. The skeleton is especially sensitive to such environmental inputs, and studying cichlid fishes offers insights into how organisms, in general, may adapt to major human-induced environmental change.

Albertson explains, “Our overarching hypothesis is that the damming of the Tocantins and subsequent formation of the Tucuruí reservoir has induced shifts in habitat and foraging behavior and that the anatomy of resident cichlid populations has change in ways that allow them to adapt to this novel environmental conditions. This study represents a first step toward assessing this hypothesis.”

Gilbert adds, “Was anything surprising? Yes! While we expected to see changes in generalist species – those that are already predisposed toward living in a variety of habitats – we were surprised to see shape changes in the specialists as well. Evolving to specialize on a particular prey-type or habitat, can provide a competitive advantage in the near term, but it can also be an evolutionary dead end in the face of a major environmental changes.”

Not only are these specialist species still found in the area, but they seem to be just as capable of changing body shape as the generalists, the authors report.

Albertson reports further that changes across all species “tended to be associated with functionally relevant aspects of anatomy, including head, fin and body shape.” They found that the regions of the body that changed over time are exactly those most likely to allow them to survive in their new environment, he adds.