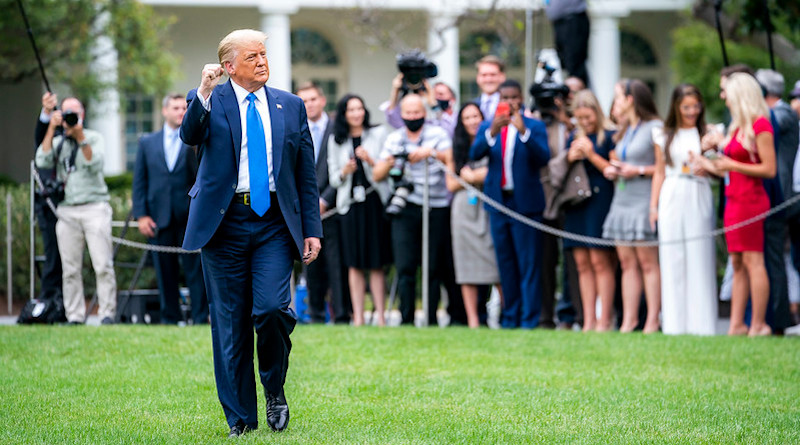 President Donald J. Trump walks across the South Lawn of the White House Thursday, Sept. 24, 2020, to board Marine One en route to Joint Base Andrews, Md. to begin his trip to North Carolina and Florida. (Official White House Photo by Tia Dufour)

U.S. President Donald Trump is continuing to cast doubt on the integrity of the national election, by expressing concern about potential fraud with mail-in ballots, a scenario many officials say is being vastly overblown.

“We want to make sure the election is honest and I’m not sure it can be,” Trump told reporters Thursday on the White House South Lawn before boarding the Marine One helicopter for travel to North Carolina and Florida.

Trump claimed that “a lot of ballots were found in a river” and those with the Trump name “were thrown in a wastepaper basket.”

A small number of military ballots were discarded and nine have been recovered as part of an investigation, according to the U.S. Attorney’s office in the Middle District of Pennsylvania.

“Some of those ballots can be attributed to specific voters and some cannot,” the Justice Department said in a statement. ”All nine ballots were cast for presidential candidate Donald Trump.”

The president has repeatedly expressed concern about plans by a number of states, including California, Colorado, Hawaii, Nevada, New Jersey, Oregon, Utah, Vermont and Washington, to automatically dispatch mail-in ballots to all state residents for the election.

Historically, the country has not seen “any kind of coordinated national voter fraud effort in a major election, whether it’s by mail or otherwise,” Federal Bureau of Investigation Director Christopher Wray told a Senate panel on Thursday.

Wray testified it would be a major challenge for an adversary to mount large-scale election fraud, “but people should make no mistake, we’re vigilant as to the threat and watching it carefully because we’re in an unchartered territory.”

White House Press Secretary Kayleigh McEnany sought Thursday to quell a bipartisan backlash after President Donald Trump hedged on committing to a peaceful transfer of power after the November 3 election.

McEnany then stated that Democrats should be asked the same question and she reiterated Trump “wants to get rid of mass mail-out voting.”

“We’re going to have to see what happens,” said the president in response to a reporter’s question during a White House news conference late Wednesday. ”I’ve been complaining very strongly about the ballots and the ballots are a disaster.”

Trump, without evidence, has repeatedly predicted massive fraud with tens of millions of mail-in ballots, which Democrats have encouraged amid the coronavirus pandemic.

“We want to have — get rid of the ballots,” continued the president, explaining if that happens “there won’t be a transfer, frankly; there’ll be a continuation.”

The U.S. Senate, on Thursday, took the symbolic action of approving by unanimous consent a resolution reaffirming the chamber’s “commitment to the orderly and peaceful transfer of power called for in the U.S. Constitution, and for other purposes.”

Congressional Republicans are stressing the importance of that a day after Trump declined to commit to one if he loses to Democratic Party nominee Joe Biden in the election, which is now fewer than 40 days away.

Senate Majority Leader Mitch McConnell on Thursday tweeted: “The winner of the November 3 election will be inaugurated on January 20th. There will be an orderly transition just as there has been every four years since 1792.”

Florida Senator Marco Rubio, a former presidential candidate in 2016, said “at noon on January 20, 2021, we will peacefully swear in the President.”

Longtime Republican Senator Lindsay Graham, appearing on the Fox News Channel, said, ”If Republicans lose, we will accept the result.”

The Republican leader in the House, Kevin McCarthy, assured “there will be a very peaceful transition of power” after the election should Trump lose to Biden.

Senator Bernie Sanders, in a speech, said Trump “is prepared to undermine American democracy in order to stay in power.”

Sanders, a Democratic presidential candidate in 2016 and 2020, said, “the American people, no matter what their political persuasion, must make it clear that American democracy will not be destroyed.”

One of the country’s oldest constitutional rights groups also weighed in.

“The peaceful transfer of power is essential to a functioning democracy. This statement from the president of the United States should trouble every American,” said David Cole, the national legal director of the American Civil Liberties Union.

Earlier Wednesday, Trump said he thinks the November election “will end up in the Supreme Court and I think it’s very important that we have nine justices.”

The president plans to announce on Saturday his Supreme Court nominee to fill the seat of liberal Justice Ruth Bader Ginsburg who died this past Friday.

If the Senate confirms the president’s nominee before the election, that would give the conservative wing a 6-3 majority on the court.

Patsy Widakuswara in Wilmington, Delaware, and Jeff Seldin in Washington contributed to this report

No doubt about it: the coup d’etat was successful. That January 6 attempt by so-called insurrectionists to overturn the election results was