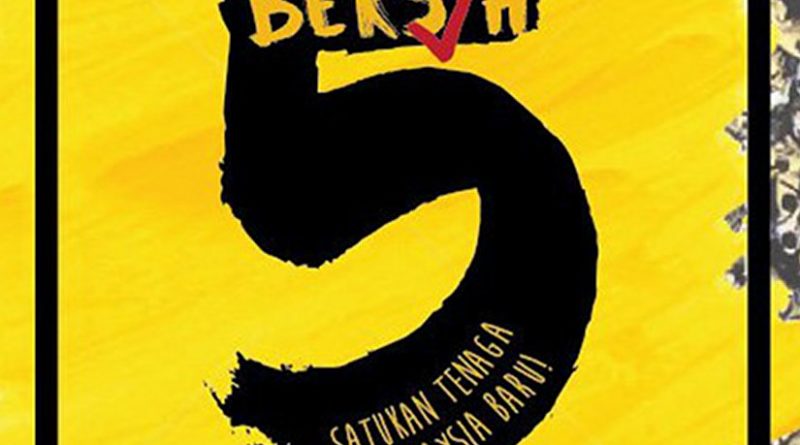 The recent yellow-shirt 60,000 strong-mass rally in Malaysia, urging cleaner elections and the resignation of Prime Minister Najib Abdul Razak ended in both warring parties winning – the protesters got their message across for the fifth time and the government got to test-drive the 2012 Special Offences Act (Sosma), its new anti-terrorist law, for the first time.

The leader of Bersih (‘Clean’ in Malay), Maria Chin Abdullah, a long-time human rights activist, is now in solitary confinement, detained like a suspected Islamic State (IS) terrorist while investigations on her alleged links with the American intelligence-gathering-legit-government agency, the CIA, are being carried out. Exactly how she is linked will be a puzzle and a mystery, like those of the world-famous money-laundering and high-profile case of the Malaysian 1MDB.

But the government, as always, is winning. I attribute this perpetual victory to one concept – hegemony. Jean-Jacques Rousseau and Antonio Gramsci, two thinkers on Totalitarianism,  have written a lot about this idea of ‘common sense’. The control over Man, machinery, media, and money.

The former prime minister, Dr Mahathir Mohamad, who ruled Malaysia with an iron glove for 22 years mastered this concept. Today he marches with the Bersih protesters, outside of the realm of hegemony he created, and trying to figure out how to play the game of counter-hegemony and feels what it is like to play with authority.

Ironically, the authority he is trying to bring down was a child of his own creation – his Frankenstein. Or rather, culturally speaking, his Badang. It is a tough and complicating act and one which seemingly has no poetic justice in sight.

Recently, in a previous article in Eurasia Review I wrote about the representation of the Malays on the eve of the red-shirt-yellow-shirt confrontation:

“ … Aren’t Malaysians tired of seeing the Malays being represented as buffoons, stupid, amok-prone, close-minded, rempits, kris-kissing fools, Ali Baba forty-thieves, rejects, religious fanatics, red-shirts, whatever shirts… it is a clever production and reproduction of the Malay ruling class, both feudal and wannabe-feudal… so that the Jebat aspect of the Malay – the amuck, the wannabe-sultan, the misogynic, the sex-maniac-royal groper and rapist of ancient Malacca, the royal-jet-setting-good-for-nothing-ancient-kings, the hedonistic, the grotesque epicure, the gangster, the absurd – is pushed forward and propagated to strengthen the Tuah aspect – the fool that followed the foolish orders of the foolish and idiotic Malacca sultan, the womaniser-cum-religious leader – the bad hombre of Malay culture – these are the twin representation of the Malays.

A laughing stock – the Malays are made to become …” Source here.

As an educator for peace and an advocate of long-haul bloodless revolutions focusing on changing consciousness through education and self-reflection, through living an ethical, morally-compassed, and intelligible life for the collective-good of society, I would suggest the following as a long-term plan for a radical change:

It is better to focus on raising your children well in adjusting to a changing, globalizing, and very diversifying Malaysian and global society. We must work harder to improve race relations, be stronger to fight corruption and power abuse, and be more intelligent in designing policies that will benefit the poor, the marginalized and the powerless.

We must teach our children to focus on ways to understand others, improving their English language skills, perfecting their moral compass, encouraging them to think well and good about children of other races and religion, to encourage them to make friends with people of other races, to be grateful that schools offer the great opportunity to love and respect teachers of different races.

Teach them to learn about the dangers of generalizing, stereotyping, and projecting hate that would lead to mass deception, to encourage each child to learn about other cultures and religion, and to teach them that all of us in Malaysia are now Malaysians and not this or that group of immigrants.

We all are migrants in time and space and in history and that all of us are human beings with emotions, struggles, challenges, history of joy and despair, memory of pain and pleasure of living, and that all of us are merely of differing skin color tone and born to speak different languages and to believe in different things about salvation and that we are all travelers in this life.

We cannot allow Malaysia to come to a point in which riots such as those race-based against the police to take root. We cannot allow the Malaysian version of #BlackLivesMatter to be the impetus for urban violence.

We are all these and will not need moments of history where we cultivate hate for the bigger picture of oppression we do not understand. We may all be pawns in this great political game of big-time plunderers and multi-ethnic robber-barons skilled at mass deception and distractions. Today, the level of corruption and the growing cases of mass corruption and power abuse that are going unpunished have made Malaysia a critically ill nation.

We should be grateful that we are still alive and breathe daily and that we must think happily and joyfully like Malaysians in order for each and every one of us to prosper in peace. We cannot travel the path of America in which racism is on the rise and of late especially in places such as Texas, Islamophobia is brewing.

Malaysians, we need to come back to our senses. Our strength will still come from diversity and the respect and cultivation of talent. We should rejoice and celebrate the achievements of this nation for that beautiful concept of unity in diversity; not to organise any rally that spews hatred and invoke the horrors of the May 13, 1969 tragedy.

Let us design a safer journey towards a progressive and harmonious Malaysia, beyond for example, the red T-shirt red-river of blood march of some mangled manufactured propaganda of Malay dignity.

My Thanksgiving wish is to see a saner and more peaceful America, as well as Malaysia – two countries I have loved and will continue to love. On that note: Have a blessed Thanksgiving, my fellow Americans!