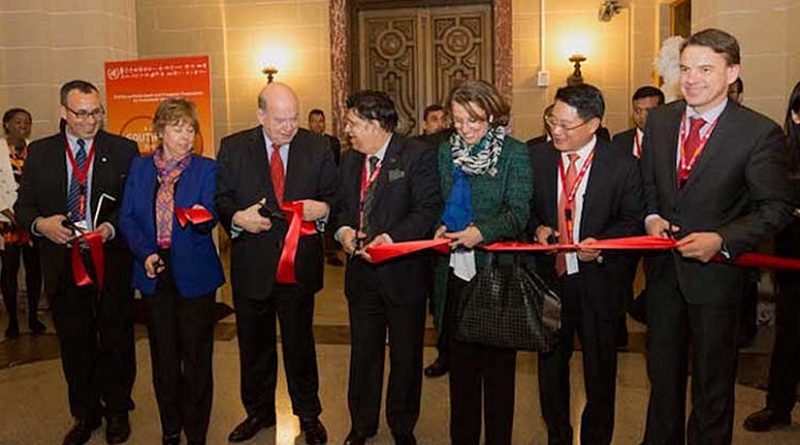 The rise of emerging economies in the Europe and the Commonwealth of Independent States (ECIS) region has boosted South-South cooperation, according to a new report.

The study by the UN Office for South-South Cooperation and the UN Development Programme (UNDP) is the first of its kind. It explores how mutual support has intensified over the last twenty years, following the region’s fundamental changes in economic, political, and social structures.

The study covers 31 countries and territories, highlighting the wealth of South-South Cooperation (SSC) in the region. It cites many interesting examples of SSC, and provides concrete suggestions to national policy-makers and other relevant stakeholders on how to catalyse SSC to achieve development objectives and Sustainable Development Goals (SDGs).

The draft study titled “South-South Cooperation: Towards Sustainable Human Development in ECIS” was presented early November in a global Expo in Dubai, as part of an open consultation process.

Various UN publications show that in 2013, SSC was estimated to have reached USD 20 billion up from between USD 9.5 billion and USD 12 billion in 2006. A similar trend exists for triangular cooperation.

Introducing the report, Olivier Adam, Deputy Director of UNDP Regional Bureau for Europe and the CIS, highlighted that the remarkable amount of mutual learning and support among developing and transition countries in ECIS often goes unnoticed.

“Several countries in the region have shown leadership in sharing knowledge and expertise, acquired during their own recent transformation process,” he said.

“The Astana Regional Civil Service Hub, for instance, is a flagship initiative of the government of Kazakhstan, supported by UNDP, and is helping share knowledge and expertise on public administration issues with some 35 countries around the world,” he added.

The report presents several examples of centres of excellence or similar mechanisms hosted and funded by new EU member states. Several countries in the region have established centres of excellence, often building on their comparative advantages accruing from their transition experience.

In this way, they make an important contribution to SSC through sharing their knowledge and expertise in a systematic manner, underpinned by mutual learning. Examples include the Public Finance for Development Programme of the Slovak Republic, the Czech-UNDP Trust Fund, the Romania Mobility Fund and a Center of Excellence on EU integration in Croatia.

Adam also highlighted the important dimension of working with the regional organizations and development banks to support SSC, including UNDP”s growing partnership with the Islamic Development Bank and The Cooperation Council of Turkic Speaking States.

South-South cooperation and triangular cooperation have received recognition in key international documents adopted recently, including in the Addis Ababa Action Agenda emerging from the Financing for Development Conference in July 2015 in the Ethiopian capital and the Sustainable Development Agenda 2030 endorsed by the international community in September 2015.

The report also maps the key regional groupings and organizations with members among ECIS countries. According to the authors, South-South cooperation in the region is mainly delivered through peer-to-peer networks, knowledge platforms, centres of excellence and demand-based facilities.

The report highlights that UN can be a vital partner in South-South cooperation and provide tailored support with regards to capacity development, knowledge brokering and facilitation.

Delegates there considered follow-up actions arising from previous sessions of the High-level Committee on South-South Cooperation, notably at its eighteenth session, in 2014, including actions arising out of the consideration of the note by the Secretary-General on the framework of operational guidelines on United Nations support to South-South and triangular cooperation.

The report of the Secretary-General containing a comprehensive proposal on concrete ways to enhance the role and impact of the United Nations Office for South-South Cooperation, as well as the key measures taken to improve the coordination and coherence of United Nations support to South-South cooperation were also deliberated.

The 19th Session featured a thematic discussion on “the contribution of South-South cooperation and triangular cooperation in the context of the 2030 Agenda for Sustainable Development”.