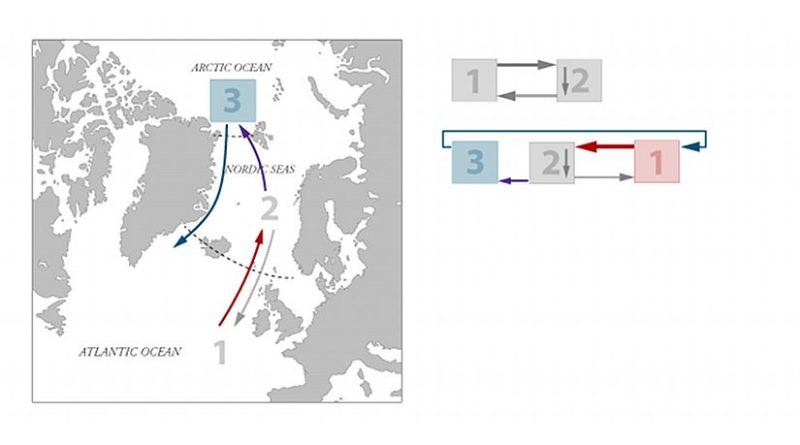 Using a new theory, Erwin Lambert shows that more freshwater in the Arctic may strengthen the Gulfstream’s extension into the polar regions – the opposite of what has generally been anticipated with future climate change.

A new study from researchers at the Bjerknes Centre for Climate Research gives less reason to fear a weakening of the Gulfstream due to climate change. One of the suggested ‘tipping points’ in the climate system is a substantial slow-down or even collapse of the Gulfstream due to increased freshwater input in the northern seas. In a warmer climate, the hydrological cycle of precipitation and evaporation will strengthen including more rainfall, river runoff and ice melt in the north. One can in its most extreme imagine this literally to close the large-scale ocean circulation between the Arctic and the lower latitudes.

In 1961, the American oceanographer Henry Stommel reduced the ocean to a few equations. With Stommel’s model, the North Atlantic can be split into a warm part in the south and the cold Nordic Seas in the north – a thought experiment of two boxes, without coastlines, islands or underwater ridges. In the North Atlantic, water flows northward at the surface, before sinking to the bottom in the Nordic Seas and flowing back southward in the deep ocean. The surface current flowing north is what we think of as the Gulf Stream. Stommel’s description of how water circulates between warm and cold regions like this, was entirely theoretical, and it was the Finnish oceanographer Clas Rooth who applied it to the Atlantic in 1982.

Stommel’s model is simple. It does not represent all factors in the real world, but still made it possible to answer a big question. You can neglect the wind, and there will be circulation in the North Atlantic. As long as water sinks in the north, the Gulf Stream will continue to flow north.

“The beauty of such a model is that we can understand the full behavior of its circulation,” said Erwin Lambert.

Lambert is a PhD candidate at the Geophysical Institute at the University of Bergen and the Bjerknes Centre, and works with a box model that builds on Stommel’s model. He remarks that both theoretical models, like his, and the large and more detailed circulation models used for weather forecasting and climate projections, only represent the real world to a limited extent.

“The benefit of a theoretical model is that we know, and actually choose, what these limitations will be.”

Simple models make it easier to pin-point the effect of changes. Like Stommel, Lambert can choose to let the water in the north be less salty and calculate how the ocean current will react to more freshwater in the Nordic Seas. A fresher north is exactly what is expected with global warming.

In a warmer world, there will be more rain and snow in the northern regions, meltwater from glaciers and sea ice will pour into the ocean, and together this will make the water in the Nordic Seas less salty. The salty Atlantic water that flows in from the south will mix with water that is fresher than it used to, and the mix will be less dense. As a result, water entering the Nordic Seas will not sink as efficiently as it has done in the past.

According to Stommel’s model, this would reduce the circulation in the Atlantic Ocean. This is the background for theories that global warming may weaken the Gulf Stream.

Two thirds of the water that enters the Nordic Seas flow back south in the deep ocean. The remaining one third continues on the north-bound route and enters the Arctic Ocean. This water is not included in Stommel’s model, and when calculating the effect of climate change, it must be. The old model consists of one box for the southern part of the North Atlantic and one for the Nordic Seas.

He admits that it’s still an open question of how well such simple box models represent reality. For example, wind – which the Stommel model does not consider – is a vital driver of the Gulf Stream near the surface. But Lambert maintains that simple models still make it possible to study major processes in the ocean.

“It’s amazing how much knowledge can be gained from a model that consists of merely five equations.”

Home » Gulfstream May Strengthen With More Precipitation In Far North