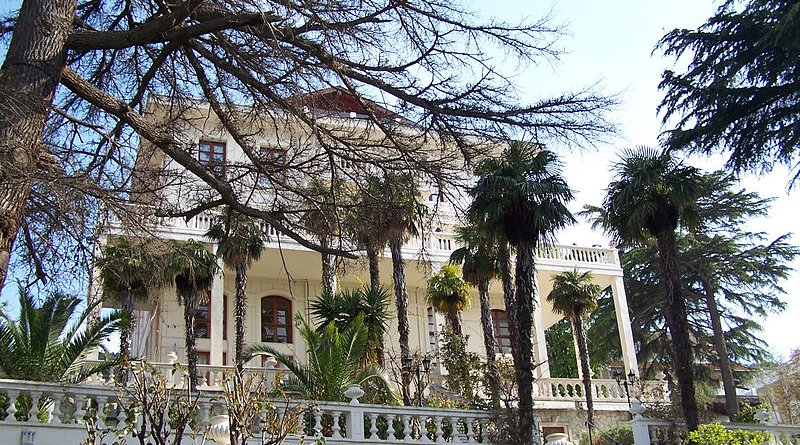 In Büyükada Bazaar selfservice Köşem restaurant indoor space at deep left corner  tables in the afternoons, Safarad Turkish ladies come and take a long table. They  choose simple vegetable dishes. The meals are simple, they are reasonably priced and delicious. They speak among themselves first in Turkish, then in Judeo-Spanish (Ladino). Then the conversations return to the high school educated French of the prestigious Dame DeSion in istanbul.

The grandchildren come to pick them up in the evening, and the grandchildren speak in New York english dialect, which we hear in the movies. The staff of the restaurant can speak very fluent Turkish besides Arabic, Kurdish, Persian and even Russian and English when needed.

One of the rare places of Prince Islands that have been rescued from the Middle Eastern tourists, the Beach Horoz Cafe is the place where the old islanders play  bridge and you can hear various languages ​​at the tables. Upper income groups prefer the Büyükada Anatolian club, in Prince islands.

Australian-New Zealand English accent  is said to be influenced by immigrants of the 18th century, while the English accent of Americans was influenced by the 17th century British emigrees. Canadian Quebec French is also different from the French modern accent. The pre-revolutionary 17th century Quebec French has old words. Brazilian Portuguese spoken and today’s language in Portugal are quite different. Although they have same written Spanish, Latin America Mexico and Spain are also very different from each other in modern spoken languages. The Eshkenaz Yiddish language is a medieval German-Slavic accent. When I hear Yiddish, I feel that German is spoken. Azerbaijan, Iran, Uzbekistan, Bulgarian, Gagauz Turkish are very different from each other, but you will soon understand and get acqainted with.

We have a Safarad Jewish Turkish friend who spent summers on the Prince islands, whose family fled from the Spanish Inquisition in 1492 and came to Istanbul by ship. After graduating from a French high school in Istanbul, my friend graduated from Istanbul University, Faculty of Business Administration. He speaks Judeo-Spanish (Ladino) in his family atmosphere at home, he learned Turkish at school and then French, and English, he speaks all of them excellent.A high school colleague who does similar business says, “Let us go to Spain together, help me to negotiate and I pay our business expenses, and you will benefit from it”.

He has never been to Spain until then. They get on a plane and go to Spain together. The next day they go to the company where they will partner, negotiations begin in the meeting room, they speak French and English. While the Spaniards talk amongst themselves, my friend looks as their conversations similar to Ladino in his own home environment, he understands everything. He is encouraged at dinner and starts to speak with his Spanish partners in their language. The Spaniards are very surprised. In his speech there are old spanish words used in very old times. Spaniards learned these words in their own literature classes, but they no longer use them in daily life. Cervantes DonQuiote says these words, “we understand, but in everyday life we ​​use these words, not those words”. When the Spanish language is spoken, the harsh atmosphere of the business environment passes and the agreement is made easier.

In recent years, the Spanish parliament passed a new legislation for those with Safarad Jews heritage  whose ancestors left the country in the 15th century. The  Safarad Jews fleeing the inquisition now have the right to be granted Spanish citizenship again. Many well-educated Turkish Safarad Jewish business people who documented their status through synagogue records became dual citizens by taking advantage of this right and hence they obtained the right of free movement between European Union countries. They easily passed the basic Spanish language requirement thanks to their Judeo-Spanish (Ladino) they spoke in their family.

We went to Syria many times between 1990-1994, we made offers on behalf of our Turkish-US joint venture company, we received orders, we did business and we earned money. Our local representative in Damascus was the grandson of an Armenian family who immigrated from Kahraman Maras in Turkey before 1915. They came to Damascus without much influence from the war, they settled, established business, became rich. The mother of our Syrian representative, mother Maria invited us to her house for dinner at the end of our first trip. With her two helpers, she prepared us a table consisting of very rich Levant Armenian cuisine. She spoke to me in fine kind old Turkish, which she learned during her childhood. She spoke very nice and polite with the old Turkish words that we read in our literature books but which we no longer use today. I listened without interrupting, I wanted her to talk a long time. On the last day of each my visit to Damascus, my hosts mother Maria  set me up at the table in her home. She shared the good old days, her childhood, her Maraş memories.

Now those good old days no longer exist. Relations with Syria need to improve again, and it takes decades to repair for trade to be made.

Home » Spoken Languages ​​Of The Prince Islands In Istanbul – OpEd