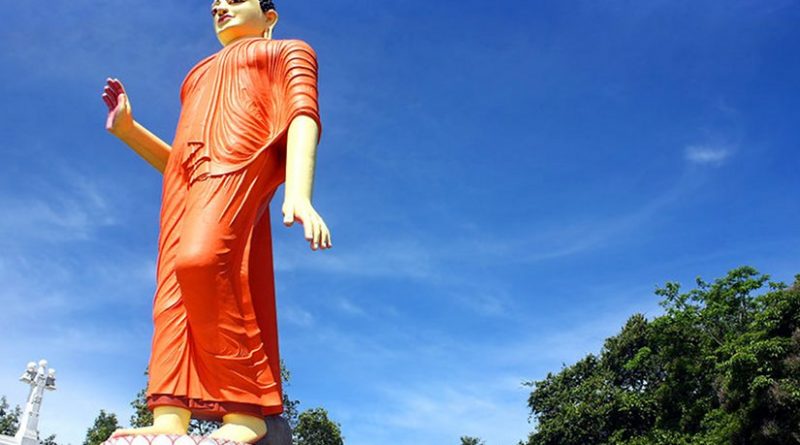 We are all well aware that both India and China are rivals for supremacy in Asia and both are fishing for new strategies to tap to forge the alliances needed to strengthen that supremacy. If India and China nations that once put Buddhism aside for other priorities are now realizing that their answer for supremacy lies with Buddhism why has Sri Lanka’s policy makers not utilized this power which is under their very nose?

Historical facts have to be first made clear. The Buddha was born in Nepal. Buddha achieved enlightenment, gained spiritual following and achieved nirvana in India (Bodhgaya, Sarnath, Kushinagar – all located in the Indian state of Bihar, one of the poorest in India). Buddhism was subsumed by Hinduism and none of India’s governments sought to even consider reviving the lost place given to Buddhism until now. However, Buddhism was abandoned by India and its leaders never gave any prominence to it though the spread of Buddhism historically is nothing anyone can deny. China too opted to set aside Buddhism until its present realization of how powerful Buddhism exactly is.

Buddhism’s compassion has unfortunately subjected ancient Buddhist nations that have been invaded and natives slaughtered through history. Once Buddhist nations today are occupied by invading forces who now claim their right to these nations – Bangladesh, Maldives, Afghanistan were all Buddhist nations once upon a time. It is a tragic truth that Buddhism’s gentle philosophy advocating right to life for both man and animal attributed to its decline.

In the modern context, much of the blame for the deterioration of religions in the world is primarily due to the teachings of its master being replaced by ideologies of those now functioning as leaders of different faiths driving people away from the fundamental teachings originally advocated. This is why there is so much of confusions and contradictions that prevail in all religions and why by virtue of these differences there is calamities based on religious beliefs and practices. The present day religious heads are totally accountable for the catastrophe’s that prevail globally.

Nevertheless, both India and China are pulling out all their historical links to Buddhism in a bid to use Buddhism to its highest potential. The efforts of these two nations to scurry for links should have Sri Lanka taking the lead for Sri Lanka weathered the storms of 500 years of colonial rule and despite the fact that it was the Sinhalese Buddhists who were massacred in trying to save their nation Sri Lanka remains a nation with over 68% Buddhists. Whilst China never forgets to remind India that its Buddhist population is far greater than that of India – though Buddhism came to China several centuries after its spread in India. India in an attempt to prove Buddhism was imported from India to China built a Buddhist temple in Luoyang. Though China’s Buddhist credentials become weak in the face of international opposition to its treatment of Tibet though much of the real situation is often hidden from the world by western owned international media.

The tell tale signs of Buddhism been made a powerful soft-power tool is evident.

China hosted the first World Buddhist Forum in 2006 – attention was diverted to reviving Lumbini with a USD3billion project, the birthplace of Buddha in Nepal. India responded with supporting the Global Buddhist Congregation in Delhi. China has an edge because Buddhism is a fast-growing religion now in China whilst India is simply trying to use smart ways to counter Chinese hegemony. China has often kept India from regional links in South East Asia portraying India as an outsider but we can see through numerous trade agreements and visits that India is countering these drives using the cultural tool of Buddhism.

India is also looking at reviving Nalanda University – an extremely strategic initiative and one that should not escape anyone’s attention because it was a place that imparted far more “teachings” on students than Buddhism alone! India, Japan, Singapore and China is part of this effort which next asks why has Sri Lanka not prominently featured in this effort? India has even gone on to sponsor the International Conference on Buddhist Cultural Heritage in Yangon/Myanmar in an obvious bid to reach out to the 89% Buddhists in Myanmar. India also went on to take the “Kapilavastu Relics” preserved in the National Museum in Sri Lanka which showed how hundreds of thousands of Sinhalese Buddhists queue to pay homage.

It is not too late for Sri Lanka to spearhead Buddhist teachings, Buddhist student cultural links including both East and Western students and the exchange of Buddhist thoughts, views, discussions and other cultural programs – there is a whole world of ways that Sri Lanka is able to use Buddhism to its advantage – our question is why is it lying dormant? India is not a predominately Buddhist country and accept for a handful of Indians more interested in the philosophical aspects of Buddha’s teachings they are not interested or committed to Buddhism and would never desire to give up their Brahmin practices. This is why Sri Lanka needs to exert its supremacy and no one can challenge this.

It is easy for any nation to use hard power – military might is never without drawbacks, economics has its ups and downs but a far greater way is to use soft power and with majority of Asian nations spiritually aligned to Buddhism there is no other soft power that needs to be used. The advantages are many.

To use a soft power tool it must have “native ownership” and India nor China can claim to have given due place to Buddhism in their national policies unlike Sri Lanka where Buddhism is enshrined in its Constitution. The success of Muslim nations has been to use Islam as a soft power which is incorporated into its “nationalistic” thinking and actions. The soft power tools of the West are Hollywood, Music and brand names. However such superficial “cultures” does not have the “muscle” or function as a vehicle to drive the objectives that Buddhism is able to achieve as a soft-power tool. These are the realities that India and China have now understood.

Asia aside, Buddhism has been able to generate a spiritual awakening amongst the people of the West probing for a calmer and philosophical meaning to their lives. Asia on the other hand needs to move away from the terrain of material pleasures that is moving them further from their religious practices.

It is no coincidence that both India and China are now digging ancient links to Buddhism to use for its own strategic advantage and when Sri Lanka does not need to do anything of the sort why do we not use Buddhism as a soft-power tool to forge greater ties with the Buddhist nations as well as tap into a fast growing Buddhist awakening in the Western hemisphere?

While China and India battle aggressive marketing strategies on how to use Buddhism to its full potential we question what Sri Lanka’s Foreign Service is doing by not using a tool already powerful and available with Sri Lanka? With so many missions and manpower why is Sri Lanka not using this soft-power diplomacy that would certainly work to our advantage on international forums like UN/UNHRC etc?

The populations of Sri Lanka, Nepal, Bhutan, Myanmar, Thailand, Vietnam, Laos, Cambodia, Japan, Korea, Tibet, Mongolia and China are a very powerful source to tap using Buddhism as a soft-power tool and Sri Lanka needs to culturally and religiously use these allies to alleviate its political standing.

Nevertheless with all the mechanizations in place, a plethora of Buddhist foundations/organizations/Buddhist Scholars already available it is timely for Sri Lanka’s leaders to use every avenue available to tap into these resources and make Buddhism a soft-power tool instead of watching other nations that abandoned Buddhism to take the lead not out of interest for Buddhism or belief in Buddhism but simply to use it as a political tool.

Sri Lanka on the other hand has ensured whatever the odds that Buddhism has not faced the same fate. It is within Sri Lanka’s right to unite the nations of Asia using the soft-power tool politically and it’s a powerful tool that Sri Lanka’s policy makers need to seriously look upon. It certainly does question the lack of interest and wonders whether it is because non-Buddhist advisors are advising the Buddhist leaders along the wrong path! If this is so it is time the Buddhist leaders realize the folly and address the situation immediately.

Home » Why Are Sri Lanka’s Policy Makers Not Using Buddhism As A Soft-Power Tool?‏ – OpEd

3 thoughts on “Why Are Sri Lanka’s Policy Makers Not Using Buddhism As A Soft-Power Tool?‏ – OpEd”