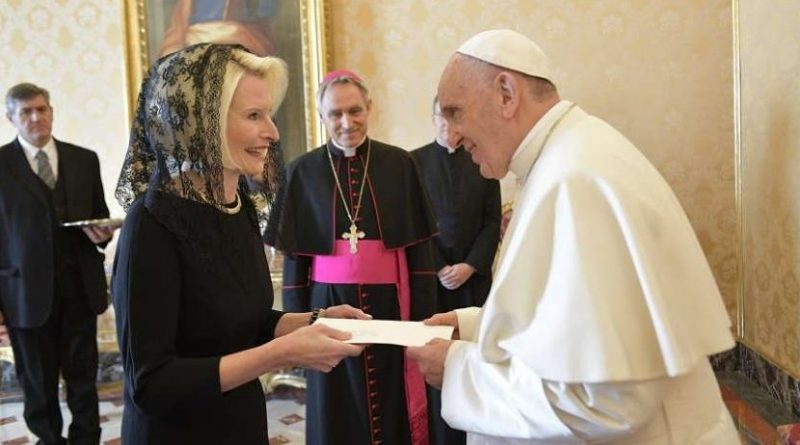 Newly-appointed American Ambassador to the Holy See, Callista Gingrich, presented her letters of credential to Pope Francis in a meeting Friday morning, officially marking the beginning of her duties.

U.S. President Donald Trump nominated Gingrich to serve as the 11th ambassador to the Vatican in May, and she was approved Oct. 16 by the U.S. Senate, in a vote 70-23.

She follows Kenneth F. Hackett, the former head of Catholic Relief Services, who served as U.S. Ambassador to the Holy See during Barack Obama’s second term as president.

Gingrich arrived in Rome with husband Newt Gingrich Nov. 6. Since arriving, she has participated in several events around Rome, including the North American College Thanksgiving dinner and a charity event hosted by St. Patrick’s American Community.

Callista Gingrich is the president of both Gingrich Productions in Arlington, Va. and the charitable non-profit Gingrich Foundation, and is a former Congressional aide.

She is also a long-time member of the choir at the Basilica of the National Shrine of the Immaculate Conception in Washington, D.C.

Newt and Callista married in 2000, after having a six-year affair while Newt was married to his previous wife. Newt converted to Catholicism in 2009 and explained, in an interview that year with Deal Hudson at InsideCatholic.com, how Callista’s witness as a Catholic brought him towards the faith.

He noted that he had attended Masses at the National Shrine where Callista sang in the choir, and she “created an environment where I could gradually think and evolve on the issue of faith.”

At the National Catholic Prayer Breakfast in 2011, he also cited Pope Benedict XVI’s 2008 visit to the U.S. as a “moment of confirmation” for him. At vespers with the Pope, where Callista sang in the Shrine choir, Newt recalled thinking that “here is where I belong.”

The couple worked on a documentary together that was released in 2010, “Nine Days That Changed the World,” that focused on Pope St. John Paul II’s 1979 pilgrimage to Poland when the former Soviet bloc country was under a communist government.

The documentary explained how the Pope invigorated the faith of the Polish people in Jesus Christ during his pilgrimage there, and how the visit precipitated the fall of Communism.

In a statement on Friday, the U.S. Embassy to the Holy See said that Gingrich “looks forward to working with the Holy See to defend human rights, advance religious freedom, combat human trafficking, and to seek peaceful solutions to crises around the world.”