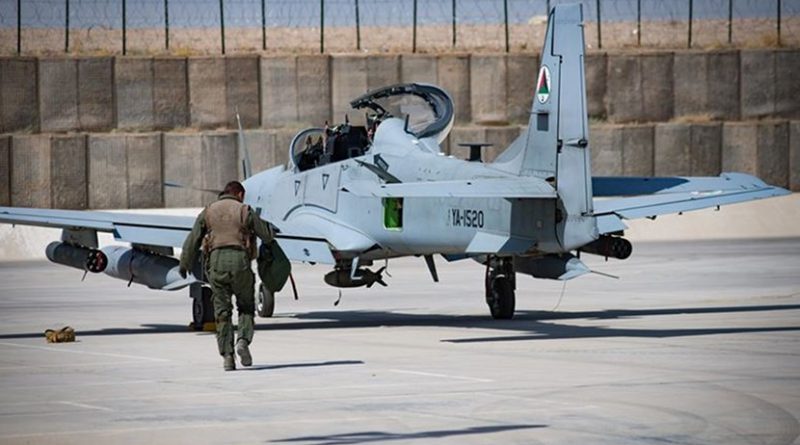 An Afghan A-29 pilot walks toward his aircraft at Kandahar Airfield, Afghanistan. The Afghan air force plans and conducts all A-29 combat missions throughout Afghanistan. Air Force photo by Staff Sgt. Alexander W. Riedel

Increased aerial attacks by the US have led to a marked reduction in terror attacks in Afghanistan, lawmakers in the country have said.

The US revision of Afghan war strategy has essentially unveiled a new weapon – increased aerial attacks to crush militants’ might on the ground. And contrary to its popular critics, including former President Hamid Karzai, a large number of Afghan lawmakers have acknowledged a notable reduction in terror attacks since August, when President Donald Trump gave the go-ahead for increased aerial strikes in Afghanistan.

Autumn in Afghanistan is usually a period when militants step up their attacks before the country’s harsh winters, when fighting traditionally subsides, only to erupt again in spring.

This fall, in spite of relatively mild weather, the country has witnessed far fewer terror activities and attacks by the Taliban-led insurgents in various areas despite a fractured political setup.

The Afghan legislators say the drop in attacks by militants, including affiliates of Daesh, has been because of the escalation in military operations, especially US aerial attacks, since Trump announced his new strategy for America’s longest and growingly unpopular war.

The US officials argue that use of air power is easy, far cheaper and safer for its troops in a country where militancy engaged the US for 16 years and persisted despite the presence of 140,000-strong US-led coalition forces.

Talking to Arab News, the Afghan officials and lawmakers said the strikes have limited the capability and mobility of insurgents to operate freely.

“Since the government is weak and our country has a mountainous terrain, the air strikes have been very productive in killings of Taliban, Daesh and Al-Qaeda commanders and footsoldiers,” said Sediqa Mubarez, a female lawmaker from the restive Maidan-Wardak province, which lies to the west of Kabul.

“People in Maidan-Wardak seem happy and have not reported or complained of civilian casualties. There is certainly a drop in terrorist attacks.”

However, she said good planning and coordination will make the strikes more efficient.
Elsewhere in the country where insurgents have been traditionally most active, especially in the southern parts, the strikes have not only eliminated insurgents, they have also destroyed their ammunition depots and small drug-processing small laboratories, which are a key source of their funding, officials said.

“The strikes have been very productive in Zabul province. The threat has been neutralized. We have not witnessed increase in terrorist activities and attacks in the past few months unlike previous autumn seasons,” General Jailani Farahi, deputy police chief for Zabul, told Arab News.

In Kabul, Defense Ministry spokesperson Mohammad Radmanesh said the air power, particularly the use of drones, “has hard hit the militants, especially in mountainous areas and caves which militants use as hideouts.

“We were recently able to safely move a convoy of 4,000 troops from one province to another without any ambush. Our capabilities have increased both as a result of training and coordination since Trump declared the new strategy.”

He confirmed the reports which suggested the Taliban had access to technology that could detect drones flying overhead in some of the battle arenas and their concentration areas, helping them to disperse and hide.

“But the hike in air strikes and security forces’ operations have either eliminated them or forced them to flee or join the peace process.”

In September, US war planes dropped more bombs than in any single month since 2010, driven largely by Trump’s strategy, according to Afghan officials. Before that, Trump’s administration dropped the world’s largest non-nuclear bomb in eastern Afghanistan as part of what it said was its campaign against Daesh.

Mohammad Sarwar, a lawmaker from Farah province, said the US was not focused in its war in Afghanistan, otherwise it would have already ended the conflict.

Former President Hamid Karzai was also a strong critic of US operations, particularly the air strikes as he said they caused the civilian population to turn against the government and foreign forces.

President Ashraf Ghani, however, has remained silent over civilian casualties resulting from US strikes. He appreciated the increase in US attacks during the recent visit of US Vice President Mike Pence to Afghanistan.