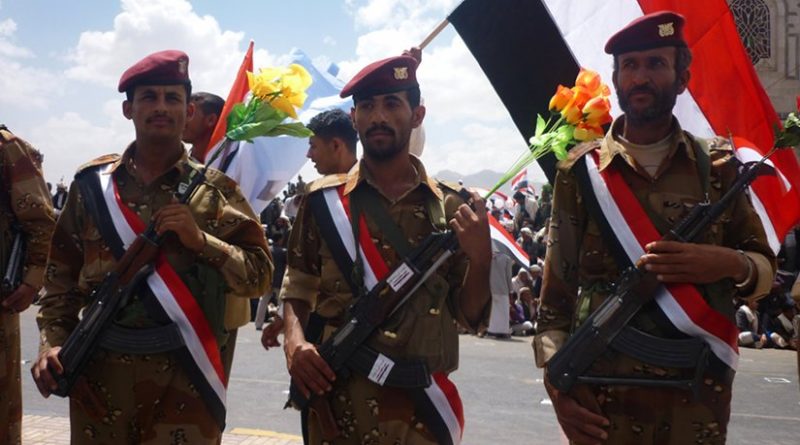 The most important recent development on the battlefield in Yemen is a war among the rebels themselves. The Houthis are racing to control the camp of their ally, former President Ali Abdullah Saleh, after they killed him. Human suffering has been exacerbated, after being relatively stable in the areas under Houthi control. Recently, the circle of confrontation grew wider and the situation became worse. It is also bad in other conflict areas and the areas under the control of the Houthis, who are an extremist religious and political group.

I read an article in the Washington Post by David Miliband, the former UK foreign secretary, about the human suffering in Yemen arising from the conflict. I agree with him that civilians pay the heaviest price in wars, such as the one in Yemen. However, I disagree with him in presenting the Houthis as a group with whom we can be reconciled without paying a dangerous price that we would all come to regret.

The rebels tried to control the main facilities, including airports, seaports and roads, and they turned these facilities into a financial resource. Estimates are that more than $5 billion goes to the Houthis from taxing transit and the passage of individuals and goods, and reselling those goods.

Miliband suggested three steps he considered necessary: Ending the coalition’s siege of the ports; a cease-fire, even if one-sided, i.e. by the coalition, since the Houthis would reject it; and starting a peaceful solution. These three suggestions actually mean the surrender of the ports to the Houthis, consolidating their power over the areas under their control and, consequently, handing them victory.

The coalition may have to accept Miliband’s suggestions simply to avoid accusations, but the main goal of ending the human suffering by delivering human and medical aid would not be achieved. Most of the tragedies are in the conflict areas, and in the rebels’ areas, and most of the aid supplies would be subject to the whims of the Houthis who use the control of supplies as one of their main weapons.

The second challenge, which is important for the coalition and Saudi Arabia in particular, is that if Miliband’s steps were to be accepted, who would guarantee that missiles would stop reaching the Houthis?

Who would hold Iran and Qatar, which finances the regional smuggling market, accountable for delivering missiles to the Houthis? Would Saudi Arabia accept the firing of ballistic missiles at its cities? Of course not, and, consequently the cease-fire would fail and the war would restart, bringing greater tragedies if the Houthis had exploited the cease-fire to expand.

Miliband also talked about activating cargo inspection. There used to be international inspection, based in Djibouti, to inspect the cargoes of ferries and ships before allowing them to sail to ports such as Hodeidah. It appeared later on that Iran was still able to smuggle its prohibited materials by sea because of the weakness of the inspection system and the knowledge that the international community would hesitate to hold it accountable. This brings the effectiveness of the inspection system into question. So how would Miliband respond to this dangerous deficiency?

He had asked the coalition countries to allow Hodeidah port to be placed under international supervision, and they agreed. However, the Houthis rejected the suggestion — and yet the coalition was still blamed for it. Now, Miliband is calling for capitulation and handing the management of the port to the Houthis because he had failed in convincing them.

Saudi Arabia agreed because of its awareness of the human tragedy. It even offered to donate four cranes to speed up the unloading and delivery process. Miliband says the procedures in the port take about 90 days!

The most important point which I would like to talk about is that the world is facing a tragedy in Yemen because it has failed to understand the nature of the conflict. The Houthis are not a rebel group that wants to defeat its adversaries and gain control of the government, as is the case in other conflicts. Rather, the Houthi militia is an armed religious extremist group, just like Al-Qaeda. And just as the international community realized that confronting Daesh was the only solution to defeat it and expel it by force from Mosul in Iraq, it has to understand that the same applies to the Houthis in Yemen.

And just as the international coalition refused to negotiate with Daesh in the Syrian city of Raqqa and expelled it from there and from other towns in Syria, instead of looking for a peaceful solution, the situation in Yemen is similar.

The truth is that there is no peaceful solution with the Houthi group. The evidence is that it made a deal with the group of former President Ali Abdullah Saleh because it was a political opposition group, but the negotiations with the Houthis failed because it is an expansionist group that wants to impose its religious views, considers jihad as an end in itself, and believes in fighting outside Yemen as well.

• Abdulrahman Al-Rashed is a veteran columnist. He is the former general manager of Al Arabiya news channel, and former editor in chief of Asharq Al-Awsat, where this article is also published. Twitter: @aalrashed

Home » Why This Yemen ‘Solution’ Is Impossible – OpEd