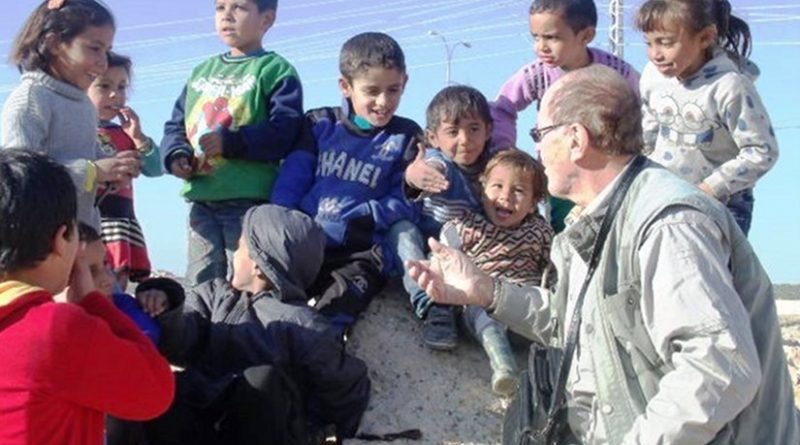 A small victory for Syrian refugees in Lebanon was achieved this past weekend as the Beirut, USA and French based NGO, Meals for Syrian Refugees Children Lebanon (MSRCL) (http://mealsforsyrianrefugeechildrenlebanon.com ) dedicated Aleppo Park in a vacant lot south of Beirut’s Ramlet El Baida beach and above the Mediterranean just under the eyes of friendly Lebanese security forces perched in a recently erected observation tower.

Over the past few years, as a total of more than 1.5 million Syria refugees, including three quarters of a million children were forced from war-torn Syria into Lebanon, recreational and family relaxation space has been very hard to come by. But across a wall and cliff from the new Karpinski Resort complex adjacent to the Algerian Embassy in a fine empty recreation area approximately two sq. mile with a great view of the sea and lots of space for children to play and families to picnic and cook outdoors.

For the past few years, Syrians have been using this space only on and off because rich apartment, hotel, and business owners living across the way objected to their ‘uncleanly practices’ and organized a “not in our backyard!” campaign. This despite the fact that the landowners do not appear to have a problem with their own “uncleanly practices” of funneling their high-rise buildings untreated raw sewage across the road and directly into the sea creating black smelly streams along Ramlet El Baida beach.

Part of the intimidation campaign targeting the refugees kids included checking their parents Lebanese visa documents and arresting them and carting them off to jail as ‘illegals,” pending their deportation back to war-torn Syria. This while immigration officials ignore international humanitarian laws which prohibit Refoulement which is the forcible return of refugees or asylum seekers to a country where they are liable to be subjected to life threatening conditions.

Perhaps half of the refugees from Syria, who on average exist on less than $ 1 a day, are ‘illegal’ since they cannot afford to pay another $ 200 every 60 days to Lebanese General Security to buy a refugee visa extension. Some international lawyers argue that the Lebanese fee itself is illegal under humanitarian norms.

The ‘cat & mouse’ ‘on again off again’ situation at the newly recognized “Aleppo Park,” so named by MSRCL because at any given time more than 90% of the children who come with family members to play and have a cook out, have fled largely destroyed Aleppo. Having lost their schools in Syria, most are no longer receiving formal education.

But there is finally some good news for the Aleppines and other Syrian refugees in Beirut. MSRCL was informed on 1/21/2017 that henceforth Syrians using Aleppo Park can do so without further interference from the government of Lebanon. The telephone call came from the Beirut Municipality Mayor’s office to this observer, after months of lobbying his office and some friendly members of Parliament. The decision was presented with a friendly quip: “Consider it a gift to your group on the day of your new presidents’ inauguration dear.”

So Syrian refugees in Lebanon waiting to return to their beloved but devastated country have another spot to relax at and MSRCL hopes, if it can gain partners, to use the site to feed Syrian refugee children, set up trash cans and just maybe, two or three portable toilets and a water faucet. And why not a garden so the tykes can have their own small plots and learn to grow vegetables and flowers?