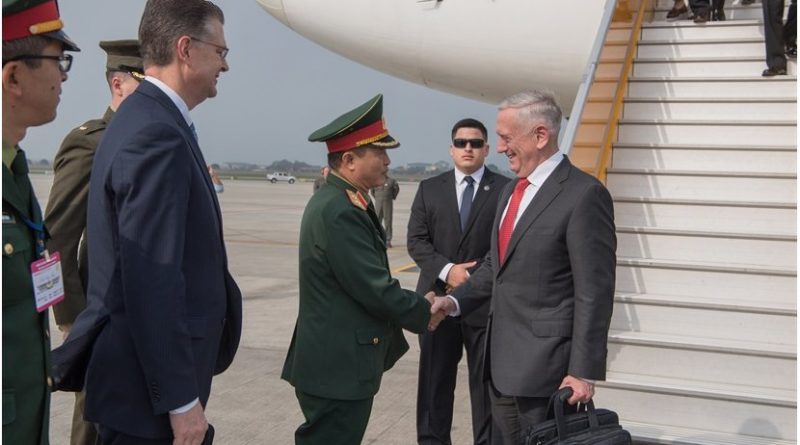 Last week US Secretary of Defense James Mattis visited Indonesia and Vietnam. His mission was to begin implementing the new US National Defense Strategy which calls for expanding and transforming Washington’s network of alliances and partnerships in the Asia-Pacific into a “networked security architecture”.

The primary goal of the US strategy in Asia is to win the “great power competition” against China. But ‘winning’ will take both hard and soft power. Nevertheless, Mattis and the Trump administration seem oblivious to this fact and to the US loss of soft power in the region. They need a reality check.

For 70 years the United States has dominated Southeast Asia with both hard and soft power– the capability to use economic or cultural influence to shape the preferences of others. Soft power underpins and makes possible robust hard power relationships. Just a few years ago, US soft power in the region was strong. Its hard (military) power is still dominant and may even grow but its soft power has declined both absolutely and relative to that of China.

The latest evidence of this was the reaction of the Philippines regarding the January 17 USS Hopper freedom of navigation operation (FONOP) near Scarborough Shoal. This FONOP came on the eve of Mattis’s departure and set the context for his trip. The Shoal is claimed by China, Taiwan and the Philippines. The US Navy guided-missile destroyer sailed through the 12 nautical mile territorial sea around the disputed feature. The Hopper’s transit was in innocent passage which is generally considered legal if somewhat provocative. China requires permission for such passage by warships and objected.

The US Embassy in Manila responded that “We believe that ‘US military personnel partnering with the [Armed Forces of the Philippines] is a more accurate description of the role of any US military presence here.” Jay Batongbacal, a prominent Philippines analyst, said the Duterte government’s response could help China and hinder the U.S. by lending credence to Beijing’s claims.

Another example of a US blind spot is the effect on US soft power of the U.S. withdrawal from its proposed Trans Pacific Trade (TTP) Initiative. Both Indonesia and Vietnam had strongly supported it. In October 2016 Singapore’s Prime Minister Lee Hsien Loong said in reference to the US withdrawal “Now you say ‘I will walk away, that I do not believe in this deal.’ How can anyone believe in you anymore?”

Yet — in a trip departure interview — Mattis, when asked if he thought the withdrawal had an impact on US relationships in the region, replied, “I’m confident it does not.” If he really believes this, it is a dangerous blind spot in his perspective.

The sad truth is that US soft power relationships in Southeast Asia are much shallower and more ephemeral than the U.S. thinks. Look at some troubling facts. Despite US enticement and pressure, US allies Australia, Japan and the Philippines have so far declined US requests to join its freedom of navigation operations in the South China Sea against China’s claims. Indonesia has expressed disapproval over US “power projection” there. US relations with Thailand have not been close since the military coup there in 2014 and it seems to be leaning towards China. Malaysia/US relations have been brittle since the U.S. took a legal interest in Prime Minister Najib Razak’s international financial dealings. Even staunch US strategic partner Singapore seems to be seeking a more neutral position between the two.

This reality has been evolving for some time. But it clearly manifested itself last August when ASEAN leaders and their dialogue partners, including China and the U.S., held a series of key security meetings in the Philippines. The joint communiqué of the ASEAN Foreign Ministers Meeting strongly favored China’s preferences over its opponents within ASEAN as well as those of the U.S. Some saw this as a new diplomatic low for the U.S. Indeed, according to Philippines analyst Richard Heydarian “…[it was] a slam dunk diplomatic victory for China.”

Despite this reality, Mattis and the Trump administration are charging ahead trying to entice Indonesia and Vietnam into a de facto ‘contain China coalition’. The U.S is likely to again be disappointed and even embarrassed not the least because of the Trump administration’s own unpredictability and vagueness about its Asia policy.

Indonesia has sharp differences with China regarding the area of the South China Sea north and east of Natuna where their claims may overlap. Mattis tried to hit all the right notes. He pledged to help Indonesia become a maritime power and indirectly expressed support for Indonesia’s claim vis a vis that of China by referring to the disputed area by Indonesia’s name for it –the North Natuna Sea. According to Indonesia’s Defense Minister Ryamizard Ryacudu, Mattis “will try to remove” limitations on co-operation between Indonesian Special Forces (Kopassus) and the US military.

But non-aligned Indonesia and the U.S. have very different world perspectives. They differ sharply regarding US policies and actions in the Middle East– especially the recent move of its embassy to Jerusalem. While the U.S. sees ASEAN as a useful bulwark against China, Indonesia’s current interest in leading ASEAN and in regionalism itself seem to have faded. US-Indonesian military ties have been troubled.

In the late 1990s they were suspended due to alleged human rights abuses by the Indonesian military. More important, many Indonesians in high places remain suspicious of U.S. motives and worried about the potential destabilizing effect of the US-China competition. They want Washington “to exercise restraint.” Ryacudu has suggested that ‘if regional countries can manage the South China Sea on their own, there is no need to involve others.’

Vietnam also has sharp differences with China regarding the South China Sea. Vietnam does have a policy of “diversification and multilateralization of relations with the major powers and Mattis appealed to Vietnam’s concerns with China. But it is steadfastly non-aligned. Indeed, its long standing policy is the “three nos” – no participation in military alliances, no foreign military bases on Vietnamese territory, and no reliance on one country to fight against another. The U.S. may well provide more arms and engage in more naval interaction, port visits and intelligence sharing – but these gestures are a far cry from enlisting Vietnam in an anti China coalition.

They say the longest journey begins with the first step. The first step for the U.S. regarding Southeast Asia is to recognize reality. Then it needs to adjust its policies and approach accordingly. Ignoring reality is both delusional and dangerous.