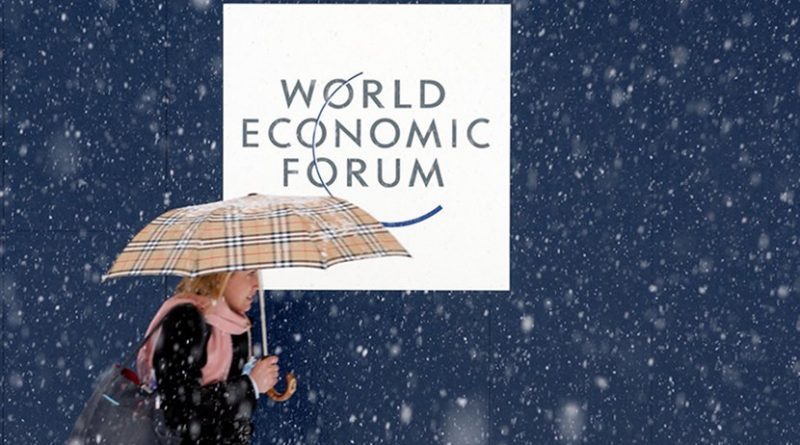 The World Economic Forum met this week (January 22-25) for its 48th annual meeting since its inception.  It costs $60,000 (or Swiss Francs) to become a member and another 27,000 to attend.  However civil society groups, NGOs, and UN and government officials can attend free.

It has been a difficult year:  Emmanuel Macron received a standing ovation last year.  This year the gilets jaunes (yellow vests) with their weekly Saturday protests in Paris have removed some of the veneer off the right-wing leader.  Donald Trump is absent, citing his wall — ironic to be a prisoner behind it — and Theresa May is in the throes of Brexit.

Meanwhile the stock market has become erratic.  From its October high of 27,000 for the Dow Jones Industrial Index, it has been down 20 percent in December before recovering to a current 10 percent under.  It is now about the same as January 2018.

It doesn’t stop the billionaires.  Their fortunes increased by $2.5 billion a day while the poorest half of the world saw their total wealth decline by 11 percent and 10,000 people die every day in developing countries from lack of healthcare.  So elaborates the Oxfam 2019 report.  A figure that has been dropping for some time, now only 26 top billionaires own as much as the poorest half (3.8 billion people) of the world.

In India, 4 billionaires own as much as the bottom half, and the richest, Mukesh Ambani, has more money than the country spends on public health, medical  care, sanitation and water supply.

The Oxfam report also blames governments for underfunding public services while taxes on corporations and the wealthy are at the lowest in decades.  With 82 percent of the wealth generated in 2017 going to the top 1 percent, it is no surprise if  a new billionaire is created every two days.  Again according to Oxfam, increasing taxes by just one-half percent on the top 1 percent would raise enough money for healthcare saving 3.3 million lives and educate 262 million children.

Tax rates for corporations in rich countries have fallen from about 62 percent in 1970 to 38 percent in 2013, with the average rate in poor countries at 28 percent.  As of January 2018, the 2017 Republican tax bill under President Donald Trump cut the corporate tax rate from 35 percent to 21 percent in the U.S.

Perhaps most shameful of all, in a relatively poor country like Brazil the poorest 10 percent paid more in taxes than the wealthiest 10 percent.  Global inequality is not an easy struggle when with this backdrop Brazil elects Jair Bolsonaro, its own Donald Trump.

So while corporate chieftains schmooze with political leaders, and vice versa, and corporate jets cause a traffic jam at Davos airport, what can the rest of us do to alleviate the miseries of inequality.  One answer is to elect people who will work to reverse the legislative excesses of the past half century  Coincidentally, these also tend to be sympathetic to combating climate change.

Source: This article was published at Modern Diplomacy

Home » WEF In Davos And Oxfam Issues Report: Is It Time To Tax The Super-Rich? – OpEd