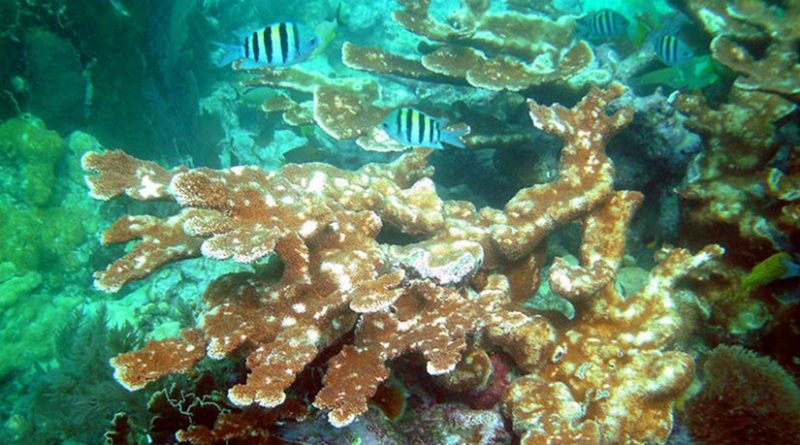 A new study suggests that coral reefs–already under existential threat from global warming–may be undergoing further damage from invading bacteria and fungi coming from land-based sources, such as outfall from sewage treatment plants and coastal inlets.

The study raised the possibility that microbes from these sources are invading reefs off of the southeastern coast of Florida. The research is published in Applied and Environmental Microbiology, a journal of the American Society for Microbiology.

In the study, the researchers, led by Chan Lan Chun, PhD, Assistant Professor of Civil Engineering, Natural Resources Research Institute, University of Minnesota, Duluth, took water samples from coastal inlets, and from oceanic outfall effluent from water treatment plants along Florida’s southeastern coast, as well as from water and coral tissues in reefs. Their work showed that certain bacterial species and fungal families are present both in the land-based sources and in water and tissues within the coral reefs. The distance from the sewage outfall pipes to the reefs ranges from 5.5 to 25 miles.

The investigators used techniques called “high throughput next generation DNA sequencing” and to analyze each of the water samples to identify and quantify the bacteria and fungi living therein, said Chun.

They then used software called SourceTracker “to evaluate and quantify the potential contributions from each of the land-based sources to the reef,” said Chun.

The fact that a small number of previous studies have failed to find on other reefs the microbes that appear both on nearby land and on reefs in this study suggest that those microbes have invaded these reefs, said coauthor Michael Sadowsky PhD, professor of Soil, Water, and Climate, and director of the Biotechnology Institute, University of Minnesota, St. Paul. “The metagenomic data we have now strongly suggests that anthropogenic input sources are becoming established on reefs.”

Experiments would need to be done to prove the hypothesis, said Sadowsky. “We would need to infect part of a pristine reef in a lab mesocosm study and follow the microbial ecology–the growth and survival–of the microorganisms that become established on the reef.”

Assuming the hypothetical invaders actually are invaders, these microbes will have almost certainly changed the community structure of the reef microbiome. That could be damaging because the microbiome “plays various roles in nutrient cycling, coral health, and creating a habitat that is conducive to the various animals and plants that live in the reef,” Chun explained.

Thus, invaders would likely disrupt the ecology of the animal and plant communities of the reef, and since the coral depends on all of the above for its health and sustenance, it would likely be harmed as well, said Chun. She said that previous studies have shown that runoff from land can harm coral reefs by infecting the coral, and disrupting the ecology of the animals and plants, including preventing growth and reproduction of some species.

Home » Land-Based Microbes May Be Invading And Harming Coral Reefs