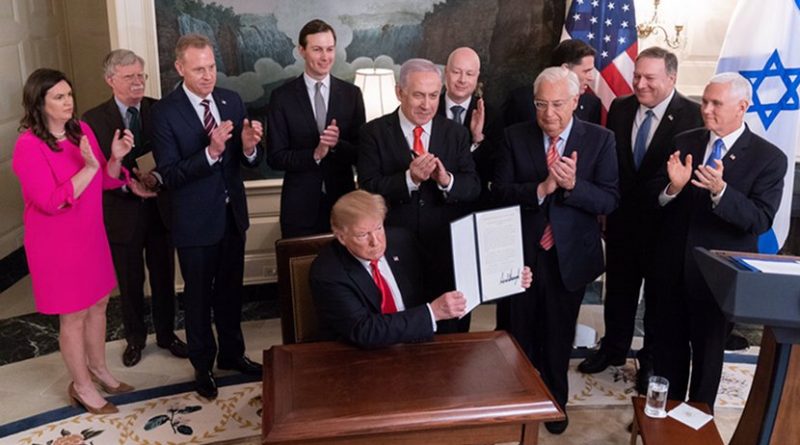 US President Donald Trump officially recognized Israel’s sovereignty of the Golan Heights in Washington on Monday.

The document reverses more than a half-century of US policy as Israeli Prime Minister Benjamin Netanyahu visited the White House.

Trump had previewed the move in a tweet last week, in which he said the US would take the step after 52 years of Israeli occupation of the strategic highlands on the border with Syria.

Israel captured the region from Syria in 1967 but its sovereignty over the territory is not recognized by the international community.

Reaction across the Middle East widely denouced Trump’s decision, with the Syrian government calling Washington’s recognition of Israeli claims over the territory an attack on its sovereignty.

“In a blatant attack on the sovereignty and territorial integrity of Syria, the president of the US has recognised the annexation of the Syrian Golan,” a foreign ministry source said, according to state news agency SANA.

“Trump does not have the right and the legal authority to legitimise the occupation,” the unnamed source said.

The president of the Arab Parliament, Dr. Mishaal bin Fahm Al-Salami, categorically rejected Trump’s decision, condemning it and saying it was “null and void” with “no legal effect,” according to Saudi Press Agency.

He pointed out that the American decision threatened the international order and “shook its foundations” and that it would increase tension and instability, as well as the peace and security of the region.

Trump’s statement “will not change the reality that (…) the Arab Golan Heights is Syrian land occupied by Israel by military force in 1967,” said Abdul Latif Al Zayani, the GCC secretary general.

Palestinian president Mahmoud Abbas said he condemned the move by the US.

After Trump’s decision, Russia warned it would prompt a “new wave” of tensions in the Middle East region. Russia’s foreign ministry spokeswoman Maria Zakharova said the move “ignores all international procedures” and would “only aggravate the situation.”

“Unfortunately, this could drive a new wave of tensions in the Middle East region,” Zakharova said in a radio broadcast, according to Russian news agencies.

Russian Foreign Secretary Sergei Lavrov said the US decision leads to “a gross violation of international law, blocks the resolution of the Syrian crisis and aggravates the situation in all the Middle East,” he said during a telephone call with US Secretary of State Mike Pompeo, according to his ministry.

Meanwhile, Turkey’s foreign minister Mevlut Cavusoglu said it was “impossible” for his country to accept Trump’s decision, and added his country would take action, including at the United Nations.

UN Secretary-General Antonio Guterres said it was “clear that the status of the Golan has not changed,” according to a UN spokesman.

The move came on the same day that Israel’s military launched strikes on Hamas targets in the Gaza Strip, hours after a rocket from the Palestinian enclave hit a house and wounded seven Israelis.

Witnesses and a security source in Gaza told AFP there had been at least two strikes on a site belonging to Hamas’s military wing in the west of the Gaza Strip. Details were not yet clear on the strikes.