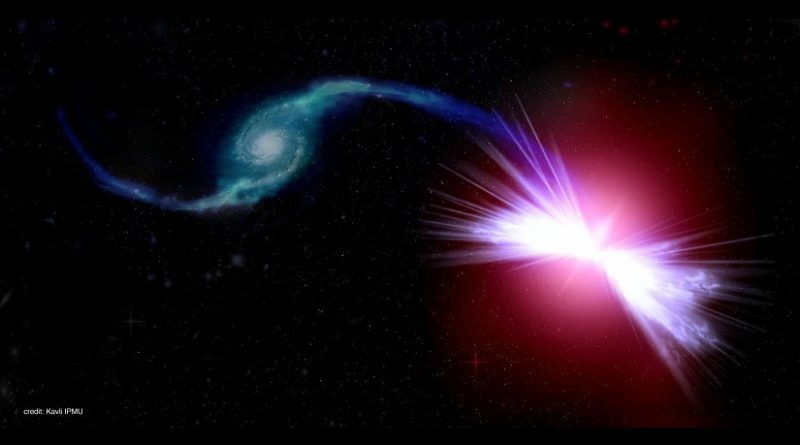 An artist's rendition of the galaxies Akira (right) and Tetsuo (left) in action. Akira's gravity pulls Tetsuo's gas into its central supermassive black hole, fueling winds that have the power to heat Akira's gas. Because of the action of the black hole winds, Tetsuo's donated gas is rendered inert, preventing a new cycle of star formation in Akira. Credit: Kavli IPMU

An international team of scientists has identified a common phenomenon in galaxies that could explain why huge numbers of them turn into cosmic graveyards.

Galaxies begin their existence as lively and colorful spiral galaxies, full of gas and dust, and actively forming bright new stars. However, as galaxies evolve, they quench their star formation and turn into featureless deserts, devoid of fresh new stars, and generally remain as such for the rest of their evolution. But the mechanism that produces this dramatic transformation and keeps galaxies turned off, is one of the biggest unsolved mysteries in galaxy evolution.

Now, thanks to the new large SDSS-IV MaNGA survey of galaxies, a collaborative effort led by the University of Tokyo and involving the University of Oxford has discovered a surprisingly common new phenomenon in galaxies, dubbed “red geysers”, that could explain how the process works.

Researchers interpret the red geysers as galaxies hosting low-energy supermassive black holes which drive intense interstellar winds. These winds suppress star formation by heating up the ambient gas found in galaxies and preventing it to cool and condense into stars.

The research will be published in the journal Nature.

Lead author Dr Edmond Cheung, from the University of Tokyo’s Kavli Institute for the Physics and Mathematics of the Universe, said, “Stars form from the gas, but in many galaxies stars were found not to form despite an abundance of gas. It was like having deserts in densely clouded regions. We knew quiescent galaxies needed some way to suppress star formation, and now we think the red geysers phenomenon may represent how typical quiescent galaxies maintain their quiescence.”

“Stars form from the gas, a bit like the drops of rain condense from the water vapor. And in both cases one needs the gas to cool down, for condensation to occur. But we could not understand what was preventing this cooling from happening in many galaxies,” said Co-author Dr Michele Cappellari, from the Department of Physics at Oxford University. “But when we modeled the motion of the gas in the red geysers, we found that the gas was being pushed away from the galaxy centre, and escaping the galaxy gravitational pull.”

“The discovery was made possible by the amazing power of the ongoing MaNGA galaxy survey,” said Dr Kevin Bundy, from the University of Tokyo, the overall leader of the collaboration. “The survey allows us to observe galaxies in three dimensions, by mapping not only how they appear on the sky, but also how their stars and gas move inside them.”

Using a near-dormant distant galaxy named Akira as a prototypical example, the researchers describe how the wind’s driving mechanism is likely to originate in Akira’s galactic nucleus. The energy input from this nucleus, powered by a supermassive black hole, is capable of producing the wind, which itself contains enough mechanical energy to heat ambient, cooler gas in the galaxy and thus suppress star formation.

The researchers identified an episodic quality to these jets of wind, leading them to the name red geysers (with ‘red’ color due to the lack of blue young stars). This phenomenon, discussed in the paper with reference to Akira, appears surprisingly common and could be generally applicable to all quiescent galaxies.

The study made use of optical imaging spectroscopy from the Sloan Digital Sky Survey-IV Mapping Nearby Galaxies at Apache Point Observatory (SDSS-IV MaNGA) program.