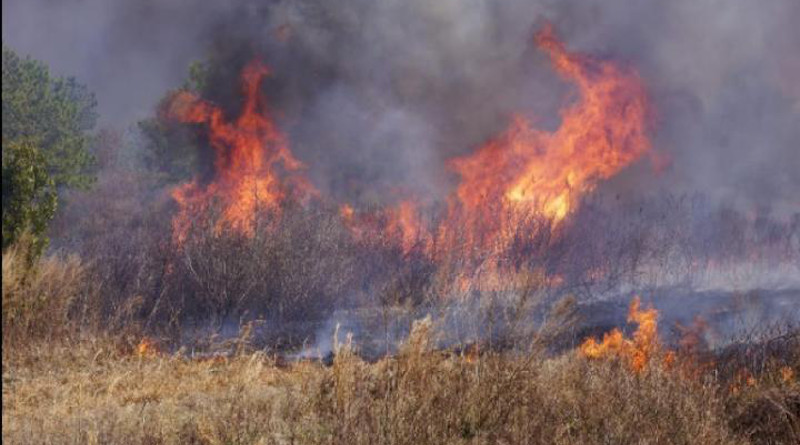 High-intensity fires can destroy peat bogs and cause them to emit huge amounts of their stored carbon into the atmosphere as greenhouse gases, but a new Duke University study finds low-severity fires spark the opposite outcome.

The smaller fires help protect the stored carbon and enhance the peatlands’ long-term storage of it.

The flash heating of moist peat during less severe surface fires chemically alters the exterior of clumped soil particles and “essentially creates a crust that makes it difficult for microbes to reach the organic matter inside,” said Neal Flanagan, visiting assistant professor at the Duke Wetland Center and Duke’s Nicholas School of the Environment.

This reaction — which Flanagan calls “the crème brulee effect” — shields the fire-affected peat from decay. Over time, this protective barrier helps slow the rate at which a peatland’s stored carbon is released back into the environment as climate-warming carbon dioxide and methane, even during periods of extreme drought.

By documenting this effect on peatland soils from Minnesota to Peru, “this study demonstrates the vital and nuanced, but still largely overlooked, role fire plays in preserving peat across a wide latitudinal gradient, from the hemi-boreal zone to the tropics,” said Curtis J. Richardson, director of the Duke Wetland Center.

“This is the first time any study has been able to show that,” Richardson said, “and it has important implications for the beneficial use of low-severity fire in managing peatlands, especially at a time of increasing wildfires and droughts.”

The researchers published their peer-reviewed findings in the journal Global Change Biology.

Peatlands are wetlands that cover only 3% of Earth’s land but store one-third of the planet’s total soil carbon. Left undisturbed, they can lock away carbon in their organic soil for millennia due to natural antimicrobial compounds called phenolics and aromatics that earlier studies by the Duke team have shown can prevent even drier peat from decaying. If a smoldering, high-intensity fire or other major disturbance destroys this natural protection, however, they can quickly turn from carbon sinks to carbon sources.

To conduct the new study, Flanagan and his colleagues at the Duke Wetland Center monitored a U.S. Fish and Wildlife Service proscribed burn of a peatland pocosin, or shrub-covered wetland bog, at Pocosin Lakes National Wildlife Refuge in eastern North Carolina in 2015. Using field sensors, they measured the changing intensity of the fire over its duration and the effects it had on soil moisture, surface temperatures and plant cover. They also did chemical analyses of soil organic matter samples collected before and after the fire.

They then replicated the intensity and duration of the N.C. fire, which briefly reached temperatures of 850oF, in controlled laboratory tests on soil from peatlands in Minnesota, Florida and the Amazon basin of Peru, and analyzed the burn samples using using X?ray photoelectron spectroscopy and Fourier transform infrared spectroscopy.

The analysis showed that the low-severity fires increased the degree of carbon condensation and aromatization in the soil samples, particularly those collected from the peatlands’ surface. In other words, the researchers saw the “crème brulee effect” in samples from each of the latitudes.

Long-term laboratory incubations of the burnt samples showed lower cumulative CO2 emissions coming from the peat for more than 1-3 years after the tests.

“Initially, there was some loss of carbon, but long-term you easily offset that because there’s also reduced respiration by the microbes that promote decay, so the peat is decomposing at a much slower rate,” Flanagan said.

Globally, peatlands contain approximately 560 gigatons of stored carbon. That’s the same amount that is stored in all forests and nearly as much as the 597 gigatons found in the atmosphere.

“Improving the way we manage and preserve peatlands is critical given their importance in Earth’s carbon budget and the way climate change is altering natural fire regimes worldwide,” Richardson said, “This study reminds us that fire is not just a destructive anomaly in peatlands, it can also be a beneficial part of their ecology that has a positive influence on their carbon accretion.”