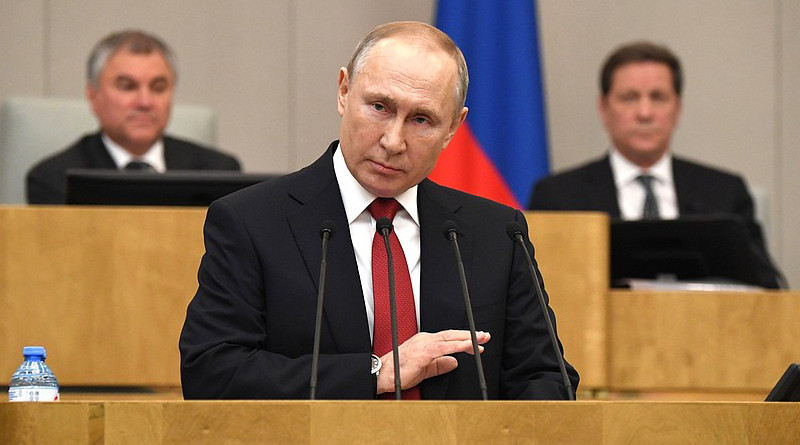 (RFE/RL) — Russia has demanded an apology from the Bloomberg news agency over a report it published about President Vladimir Putin’s low trust rating among Russians.

The Russian Embassy in Washington, D.C., said in a post on Facebook that the article by Bloomberg, which cited a poll last month conducted by Russia’s main state-funded pollster, the All-Russian Public Opinion Research Center (VTsIOM), was “written to promote fake graphs and create sustainable false visual images about the ‘negative dynamics’ in Russia.”

The report on Bloomberg noted that only 27 percent of respondents in the poll, published on April 27, named Putin when asked to name a politician they they most trust.

The embassy, however, said that “the editors of Bloomberg continue to show complete disrespect for its readers” since the “real level of trust” is 67.9 percent, a number that refers to a second part of the poll that asked specifically whether the respondent trusted Putin.

Bloomberg has not commented publicly on the issue.

It’s not the first time VTsIOM’s polling on the issue has been rumored to be a source of irritation for the president.

In May 2019, VTsIOM added the closed, yes-or-no question on whether respondents trusted Putin, a format that led to a huge jump in his rating.

Some critics questioned why the agency changed its methodology and accused VTsIOM of succumbing to pressure from the Kremlin.

VTsIOM General Director Valery Fedorov explained at the time that the change was made to give a more rounded picture of the public that would make the data “more understandable to our audience and the journalistic community.”

A May 6 poll by the independent Levada Center put support for Putin at 59 percent in April, down from 63 percent the previous month. It was the lowest recorded approval rating for Putin since September 1999.

A second Levada poll released the same day, however, found increased support for proposed constitutional amendments that would, among other things, enable Putin to seek two more presidential terms.

According to that poll, 47 percent of Russians favor the package of amendments, up from 40 percent in March. Those who said they would definitely participate in the national vote on the constitutional changes were even more likely to support them, with 58 percent saying they would vote “yes.”

Pollsters cautioned that the most recent polls were conducted by telephone rather than face-to-face because of coronavirus-related restrictions, which makes it difficult to compare the results.

In recent weeks, Moscow has lashed out at several Western outlets over their coverage of Russia’s response to the outbreak.

The Foreign Ministry on May 14 criticized the Financial Times and The New York Times after they reported that Russia’s coronavirus death toll could be much higher than officials were saying.

Ministry spokeswoman Maria Zakharova complained about what she called “disinformation” by the two newspapers and said letters demanding a retraction would be passed on to both.