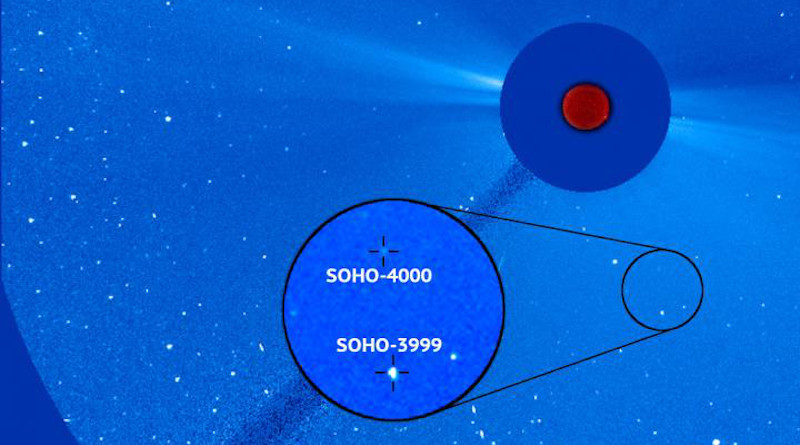 Courtesy Photo | The 4,000th comet discovered by ESA (European Space Agency) and NASA's SOHO observatory is seen here in an image from the spacecraft alongside SOHO's 3,999th comet discovery. The two comets are relatively close at approximately 1 million miles apart, suggesting that they could have been connected together as recently as a few years ago. CREDIT: ESA/NASA/SOHO/Karl Battams

LASCO, which is aboard SOHO, was developed in 1995 to see the extremely faint emission from the region around the Sun called the corona. Operating in space for nearly 25 years, the telescope has seen much more space action than researchers originally anticipated — discovering well over half of all known comets.

“In less than 25 years SOHO has added this huge volume to the archives of our comet knowledge, and it comes from a telescope not designed to see comets,” said Karl Battams, NRL computational scientist. “This is exciting for many reasons, but perhaps mostly because LASCO is discovering comets that are otherwise completely unobservable from Earth due to their proximity to the Sun.”

The majority of the comet discoveries were made by amateur astronomers who participated in the NASA-funded and NRL-managed Sungrazer project, which encourages citizen scientists to peruse imagery from SOHO and the Sun-Earth Connection Coronal and Heliospheric Investigation (SECCHI) instrument suite on the NASA Solar Terrestrial Relations Observatory (STEREO) and search for previously unknown comets. New comet findings are reported through the website, and subsequently verified and measured by Battams, who has led this Project since 2003.

“The people who discovered these comets were not necessarily professional astronomers, they were people at home,” Battams said. “People of all ages, backgrounds, and countries have volunteered their time to be a part of this citizen science project. The 4000th comet is a testament to the invaluable input from so many volunteers all around the world over the past two decades.”

The Navy has a unique interest in the Sun and near -Sun environment. Much of the Navy’s equipment, and equipment we use every day, such as GPS, is impacted by the Sun. Studying comets traveling near the Sun helps researchers gain a greater understanding of Earth’s closest star, as they observe the comets reacting to its extreme environment.

Battams is a computational scientist and astrophysicist within the Solar and Heliospheric Physics Branch under the Space Sciences division at NRL. The mission of this Branch is to develop improved heliospace environment understanding, awareness, sensors, forecast capabilities, and monitoring tools that predict operational impacts and enable real-time threat warning; and transition these developments to support the Navy/Marine Corps and other agencies.