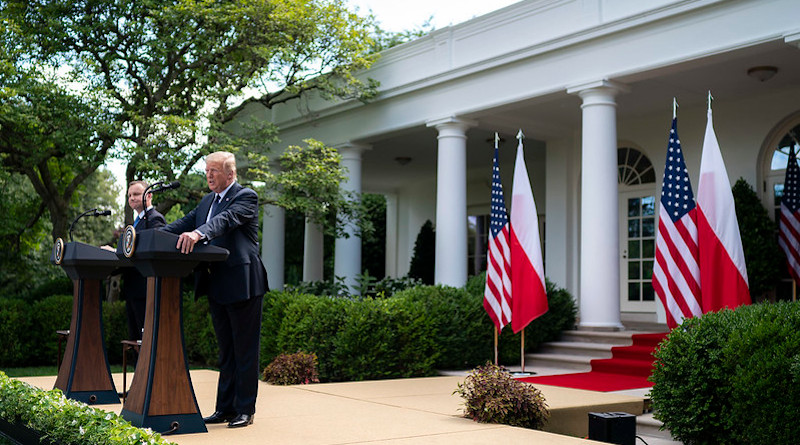 Donald Trump on Wednesday met with Polish President Andrzej Duda — his first face-to-face session with another world leader since the outbreak of the coronavirus pandemic. His strong relationship with Duda highlights the way that the US’ Europe policy is recalibrating toward stronger ties with states with pro-Trump leaders, like Poland, but weaker relationships with some traditional allies, especially Germany.

For, while Duda got a glowing endorsement from Trump ahead of Sunday’s Polish presidential election, other European leaders — especially in Western European countries, which have traditionally been strong US allies — have been “frozen out.” For example, the German Chancellor Angela Merkel has long had a difficult, frosty relationship with the US president.

The latest evidence of this came at the end of last month, when Merkel was reportedly the only G7 leader to refuse to travel to the White House for the now-postponed June leadership meeting of the West’s largest economies.

Trump seems to have taken great offense and it appears not a complete coincidence that, only days later, he announced plans to withdraw some 9,500 US troops from German bases. The White House, extraordinarily, did not tell Merkel about this move in advance.

The US military presence in Germany is, of course, a key legacy of the post-Second World War occupation of the country. Germany currently hosts by far the largest number of US forces in Europe, followed by Italy, the UK and Spain, and it is this that Trump is seeking to change as part of his policy reorientation toward Europe.

In making his announcement, Trump accused Berlin of being “delinquent” in its military spending, including its payments to NATO. What he refers to here is the failure of Germany to meet the target agreed by all of the military alliance’s members that defense spending should reach 2 percent of gross domestic product by 2024. Berlin, along with most other members, is some distance from meeting this target.

Poland is one of only a handful of NATO members that meet the 2 percent target, and Duda’s government has been much more welcoming of Trump than many others in Europe. So much so, in fact, that Warsaw in 2018 proposed to name a military base in the country “Fort Trump” in a bid to persuade the president to order a permanent presence of about 1,000 US troops in the country.

The US has provided succor for Poland in its battles with Brussels, given the Trump team’s deep skepticism about European supranationalism. As annoyed as he is with the continent about defense spending, it is economics that is the deepest source of frustration for the US president, given Europe’s big goods surplus with his country.

Tensions are so high at the moment that US-EU trade wars could well be on the horizon on multiple fronts, from digital taxes to automobiles, with sanctions also possible over issues such as the Nord Stream 2 pipeline, which Washington asserts will deepen Europe’s reliance on Russian energy. It is possible that all of these issues could come to a head in the second half of this US election year.

Earlier in his term of office, Trump remarkably declared: “I think the EU is a foe, what they do to us in trade.” And he has called for more “Brexits.” The contrast with US policy at the start of the European integration process could not be starker. Embodied in John F. Kennedy’s 1962 “Atlantic partnership” speech, the core US view back then was that a united Europe would make future wars in the continent less likely; create a stronger partner for the US in meeting the challenges posed by the Soviet Union; and offer a more vibrant market for building transatlantic prosperity.

However, US attitudes gradually became more ambivalent as integration deepened, particularly in recent Republican administrations. In the economic arena, for instance, the drive toward the European Single Market led to US concerns about whether this would evolve into a “fortress Europe.”

Prior to Trump, the George W. Bush administration came closest to questioning the value of European integration. The controversy over the Iraq conflict saw Washington querying the benefits of EU collaboration in the security and defense arena. On the eve of the NATO defense review of 2003, then-US Defense Secretary Donald Rumsfeld even drew a distinction between “old” and “new” Europe, with the latter (mainly Eastern Europe) perceived as more favorable to US interests. This is a theme that has also become salient during the Trump era, with the president generally significantly more popular in key Eastern European states than he is in the west of the continent.

However, while the Bush team eventually recognized the need to draw back from this approach, it appears Trump may not be willing to do the same and has indeed raised the rhetoric several notches. This points to the very real prospect that, if the president is re-elected in November, overall transatlantic relations could continue to deteriorate.

Home » Trump Tears Up Traditional US Approach To Europe – OpEd