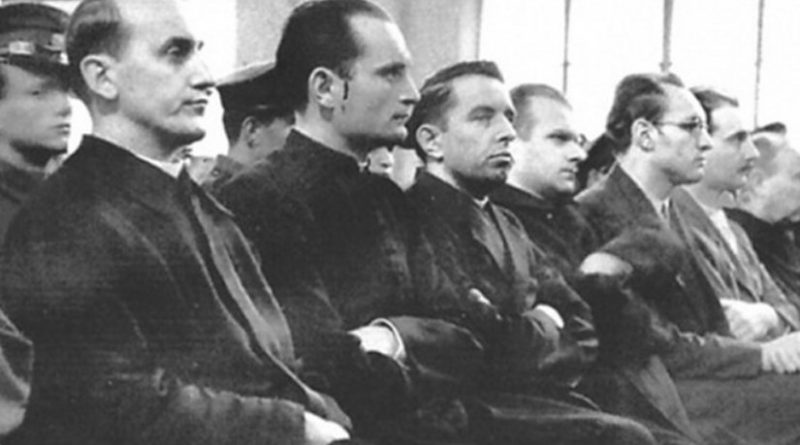 When will Croats and Serbs stop arguing about Cardinal Stepinac? No time soon, by the looks of things. Long after the rest of Europe and the world moved on from 1945, Croats and Serbs remain stuck right there, as if the clock had stopped, still battling over Communist-era show trials, Fascism, anti-Fascism and much more besides.

The least controversial part of the latest installment of the Stepinac saga is – or should have been – last Friday’s judgment of the Zagreb County Court, absolving Stepinac of the charge of collaboration. Whether he did or did not collaborate with Nazi Germany – define “collaborate” for a start – it is obvious that no trial conducted in 1946 in Communist Yugoslavia was a “trial” in the useful sense of the word.

In a real trial, the defendant has a standing chance of acquittal after the evidence is tested in court – but none of the show trials conducted in the satellite regimes of Eastern Europe met those criteria even remotely. What those trials were designed to do is humiliate and intimidate remaining opponents of the new communist regimes. The verdicts were arranged in advance.

Stepinac was relatively lucky. His Serbian alter ego, Draza Mihajlovic, was executed, as were countless others. Even by the standards of the Soviet bloc, the Yugoslav regime in the 1940s was exceptionally trigger-happy. Besides all the better-documented massacres, it executed thousands of people in and around Trieste in 1944-5 during the brief Yugoslav occupation of that city – a massacre that has been virtually forgotten outside Italy.

For complex reasons, the Soviet regimes were more wary of executing archbishops than Italians in Trieste or political leaders like Mihaljovic. Instead, Stepinac joined a group of Eastern bloc archbishops flung in jail, including Mindszenty of Hungary – jailed in 1949 – and Wyszinski of Poland – who had to wait to 1953 for his jail cell.

All three were jailed for the same vague mishmash of crimes – collaboration, anti-state activity and so forth – that the communists always came up with. What was curious about Stepinac is that the victorious Yugoslav Communist leader, Tito, had actually paid him an amicable public visit in 1945 – a strange gesture to make to a known collaborator. But, then, Tito gave the game away the next year when he said, in a speech in September 26, 1946: “We arrested Stepinac, and we will arrest everyone who resists the present state of affairs, whether he likes it or not.” Tito’s then right-hand man, the Montenegrin Milovan Djilas, drove home the same point. He later wrote that Stepinac “would certainly not have been brought to trial for his conduct in the war… had he not continued to oppose the new communist regime.” So there you have it.

It is a pity that the matter does not rest there. Instead, to add to the absurdity, the late Cardinal Archbishop’s legion of devotees keep stirring the pot and pushing in the other direction by pressing for his canonization.

Those of us who are not Catholics have of course no right to say who the Catholic Church should beatify and canonize. But one cannot help wondering whether the brand of sainthood is not devalued by such an initiative. He may have been brave in staying at his post in 1945 when he could have fled the country for Spain or Argentina, as so many of the Ustasha did. But he was less brave in the summer of 1941 – by which time he was well aware of mass killings of Serbs and many others being committed by the Ustasha.

We know he was aware because he wrote to some of his fellow bishops condemning it – yet did nothing in public beyond passively avoiding contact with the Ustasha leaders and delivering a few sermons in the confines of his cathedral.

One can argue that he would have risked his life had he denounced the killings in public – but isn’t part that the point of being a saint – a willingness to rise to the occasion and put your life on the line?

It is also obvious that, unlike his German and Polish predecessors, the current Argentinian Pope is not that persuaded by the Stepinac-for-saint campaign, or Francis would not have set up a new commission to study the subject that includes Serbian Orthodox clerics. In doing that, he has made it clear he intends to put the Saint Alojzije business in the deep freeze.

He is also clearly more interested in canonizing Oscar Romero, the late Archbishop of El Salvador who paid for his public denunciations of right-wing death squads in 1980 with an assassin’s bullet.

Whether or not you agree with Romero’s politics, he does seem to fit the bill of “martyr for the faith”. As for Stepinac, it is time everyone let go of the whole unproductive, exhausted, sterile subject. Stepinac’s dilemmas, choices and preoccupations were those of a particular time and place and have almost no relevance to the modern world or the needs of the modern Catholic Church. Neither demon nor saint, it is time he rested in peace and, for goodness sake, let’s all move on.

Home » It is Time To Let Go Of Cardinal Stepinac – OpEd