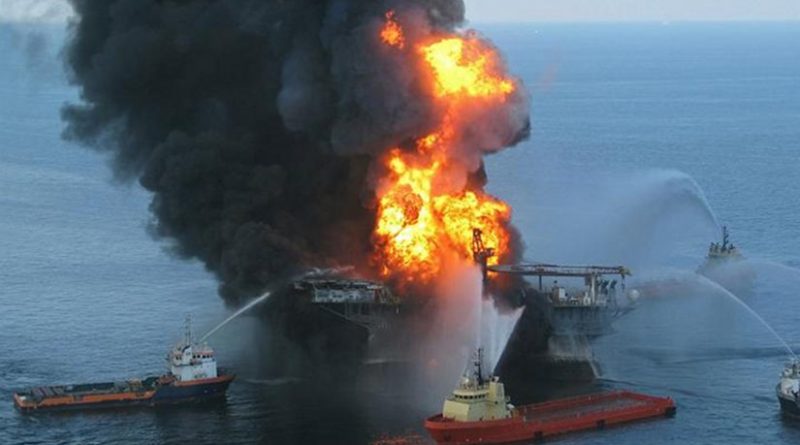 Ten years after the catastrophic BP oil spill in the Gulf of Mexico, Dean Blanchard of Grand Isle, Louisiana, is still haunted by what he witnessed.

“It was about three weeks after the spill and I was standing on the beach,” he remembers. “I saw a pelican flying crooked with blood coming out of him. I yelled for my buddies to take a look, and then this pelican crashed and died right in front of us. We walked over to it and it was covered in that thick brown oil.”

A few days later, he was on his dock and saw a dolphin with her calf – both also covered in oil.

“The baby was dead,” he says, “and that momma was just looking up at us with these eyes that were like, ‘Please help.’ Dolphins are smart animals, and I still can’t forget how scared those eyes looked.”

Blanchard operates one of America’s biggest shrimp distributors, Dean Blanchard Seafood, which has yet to fully recover from the aftereffects of one of the world’s worst oil disasters.

The calamity began when the Deepwater Horizon oil rig, leased by London-based BP, exploded off the coast of Louisiana on April 20, 2010, killing 11 workers and injuring 17 more. By the time the well was capped in July of that year, more than 800 million liters of crude oil – some 5 million barrels – had leaked into the Gulf of Mexico.

The environmental catastrophe devastated one of the world’s most productive aquatic ecosystems five years after Hurricane Katrina had decimated the region. Many of Louisiana’s coastal towns had been fighting for survival for years before oil began choking the region’s estuaries.

“We had lost 67% of our population after the storm,” said fishing charter captain Ryan Lambert of Buras, Louisiana. “We used to have orange groves employing people, but Katrina knocked those out.”

Buras sits near the end of the Mississippi River on a thin finger of land that snakes more than 100 kilometers into Gulf waters. In the years after the hurricane, Lambert said, what was left of the community centered on fishermen like him who decided to stay. The oil spill sunk what was left of the fishing industry.

“Once oil hit the beaches and the news showed all those animals covered in crude, my livelihood was done,” Lambert explained. “Nobody wanted to go on fishing trips.”

Some argue decisions made after the spill inflicted more harm, including the use of a chemical, Corexit, to disperse oil and keep it off the surface. Researchers say the chemical has increased toxicity in Gulf waters. Many locals blame it for a range of health problems suffered by fishermen and others along the Gulf Coast.

“Choices were made to get that oil out of sight and out of mind as fast as possible,” Blanchard said. “Eleven people died when that rig exploded, but the BP oil spill has a lot more victims than that.”

To cover the losses of businesses and individuals, BP agreed to pay the lion’s share of a record $20.8 billion settlement – the biggest for an environmental disaster in U.S. history. Distribution of the funds remains a sore spot for many to this day.

“You’ve got grown men in tears because their livelihood is gone and they’re not being compensated, while you’ve got hairdressers and other business in cities like New Orleans who received checks for money they never lost,” said Lambert, who maintains he received $800,000 less than the total revenue he would have earned without the disaster.

Shrimper and oyster harvester George Barisich said he had to settle for 35% of lost income. What disturbs him even more, however, is what he sees as inadequate allocation of resources to rebuild the estuaries that will bring back damaged aquatic populations he relies on to earn a living.

“BP had to pay a lot of money,” Barisich said, “but the Gulf of Mexico is a complicated system. And – like they say – all the king’s horses and all the king’s men couldn’t put Humpty Dumpty back together again.”

More than a decade later, evidence abounds of the failure to fully repair that system.

Much of the Gulf’s diverse range of fish and seafood has failed to recover. In the case of oysters, the Louisiana Department of Wildlife & Fisheries reported nearly 15 million pounds harvested in Louisiana in 2009. The 2019 harvest totaled fewer than 8 million pounds, a drop of nearly 50%. Annual catches of crabs, shrimp and saltwater fish all remain below 2009 levels, as well.

“That oil’s basically created pavement at the bottom of the Gulf,” Barisich explained. “Some seafood likes to hide at the bottom, but they can’t burrow in pavement.”

Blanchard blames the situation for shrimp hauls that continue to decrease annually.

“They’ve got nowhere safe and healthy around here to spawn,” he said, “so their population just drops.”

Meanwhile, the market has shifted – perhaps permanently. As domestic shrimp production has cratered, suppliers have turned to imports that are cheaper and – according to Louisianans – less healthy and lacking in flavor. Imported shrimp now make up 92% of the U.S. market.

“Your average fisherman is paying more than $150 in expenses each week,” he explained. “I buy ice, I buy food, I buy fuel, I need to maintain my boat – that’s all money I was spending in the community, and our towns are missing that money now.”

Swimming without a paddle

In the decade since the Deepwater Horizon oil spill, Louisiana’s Gulf communities have faced numerous challenges that have combined to threaten their way of life.

Each hurricane that passes through the region dredges up oil that settled on the seabed in 2010. The Mississippi River collects harmful fertilizer from American farms and deposits them in the Gulf of Mexico, creating a massive and growing “dead zone.” Climate change swells the river’s height and imperils New Orleans, forcing the diversion of the Mississippi’s freshwater into saline estuaries, further destroying a fragile ecosystem. And now the COVID pandemic has shuttered restaurants and kept tourists away.

Despite all the disasters withstood and heartbreak endured, locals like Lambert say they aren’t giving up.

“We can handle a knock-out blow like Katrina and bounce back,” he said. “We can handle an oil spill, too, because Mother Nature’s strong. She’ll rebuild if we just stop getting in her way.”

George Barisich agrees, saying Gulf communities can bounce back if given a fair chance.

“We’ll swim without a paddle, no problem. But when you tie our arms behind our back and cut one of our legs off? There’s nobody who can swim like that.”