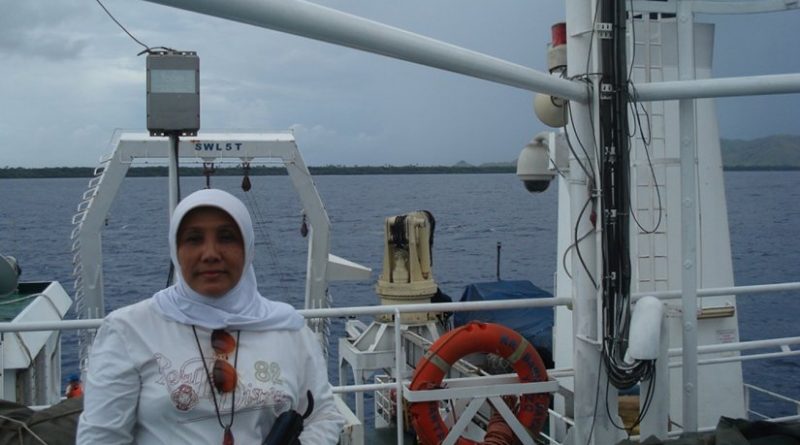 Most Indonesian people have never heard of Dr. Suhartati M. Natsir, but in Europe, especially in The Netherlands and France, this 57-year-old woman from Bima in West Nusa Tenggara is well-known as a consistent researcher in the field of Micropaleontology, especially Foraminifera.

In her own country, Suhartati is the principal researcher in the field of Bioremediation, and Environmental Pollution at the Indonesian Science Institution. Bioremediation itself is a development of the environmental biotechnology field by utilizing the biological process controlling the pollution and this gives the positive impact to be one of the clean, natural, and the most inexpensive environmental technologies and one of which taking the benefit of water plants to neutralize certain components in the waters. In other words, bioremediation is very important for the survival of humans because it aims is to break down the contaminants into less toxic or non-toxic materials from the environment.

Suhartati is familiarly called “mother” by her juniors, and she welcomed this author from Eurasia Review with the hospitality and tenderness typical of a mother, rather than as one of the most important researchers in the Indonesian Science Institution, especially in marine knowledge. Being a researcher was not her initial dream. A doting mother to her children, Suhartati had originally aspired to become a lawyer as she thought this profession would give her a good living. One can hope, but destiny is sometimes much different from what we had hoped for.

In this respect, after graduating from Senior High School, Suhartati realized that she could not become a lawyer, and so she set her heart on becoming a researcher. She became serious doing her routine days as student in the faculty of biology, at the University of Gadjah Mada Yogyakarta, Indonesia. Young Suhartati became more diligent when she wrote papers relating to marine and environment subjects, which eventually allowed her to become a reliable researcher in those fields.

In the mind of this woman, who loves her country and Malay songs, it is very important to learn about the marine sector because Indonesia is an archipelago, or which 70% of its territory is linked to the sea and represents a tremendous potential for the life of the nation. This reason has given her strong motivation to be one of the best in the field of marine knowledge, coupled with her huge sense of curiosity for the things that are still poorly known in the region.

Suhartati is a “living library” for her colleagues and juniors, this youthful looking mother has been very active in various organizations along with other researchers from around the world: for example, she is the member of the Cushman Foundation since 2010, as well as a member of the International Association of Meiobenthologists since 2008, in addition to being also active as a member of the Indonesian Association of Oceanology where she has been the secretary general since 2008. Suhartati has published 104 scientific journals, articles and other writings, attended 24 seminars from 2009 to 2014, and joined 15 training events of marine, biology to journalism from Jakarta, Bandung, Yogyakarta, Malaysia, the Philippines, Bangkok, Tokyo, Xiamen China, Amsterdam to Bordeaux in France.

Suhartati has been participating in various marine expeditions ranging from the archipelago, researched in Bandar Sribegawan, Great Barrier Reefs in Australia, the islands of the Caribbean, Red Sea, up in Canada and expedition Snell II from 1984 to 2014. Although already busy with various tasks and researches, she still finds her time to be the editor at a State University since 2009.

It seems that Suhartati has already done almost everything in the field of marine science, and one can wonder what else can she dream for?

When Eurasia Review asked her this question, Suhartati who loves to eat grilled fish with Indonesian special vegetable dishes and chili paste, looked straight at this reporter and and expressed the deepest desires of her heart.

“Most of the coastal communities live as fishermen, but my heart feels very sad because there are many of them who live below the poverty level,” Suhartati said, yet countered this with, “We all know that we love this country that has many beautiful beaches with white sand and an underwater scene with a collection of the most beautiful coral reefs in the world, as well as the potential results and outcomes abundant marine fossil deposits millions of years ago that have become the oil fields that are ready to be explored for the good of nation. ”

Unfortunately, according to Suhartati, human resources in the coastal areas are not yet ready to manage and develop this territory independently. Suhartati said part of this problem relates to the education level of the population that is broadly speaking still very low, coupled with a lack of awareness to develop the potential of the surrounding areas, as well as lack of attention from the government both at the regional and state levels.

Suhartati said there while there are efforts currently being undertaken in the areas of education and training, “the results are still far from what we expect.”

In this respect, Suhartati said there must regulations and support from the government for counseling and training programs that can be implemented properly from Sabang to Merauke, from the Western to the Eastern part of Indonesia, so as to create the equal growth.

As an oceanographer and the environment specialist, Suhartati is concerned about the pollution from offshore drilling, results that threaten the survival of the surrounding biota and consequently will affect humans.

When this author questioned Suhartati whether the ideals of Kartini, the founder of Indonesian women emancipation, is still relevant in the lives of Indonesian people, especially women, she replied with an emphatic ‘yes’, adding that those things that had been done by Kartini relating to the emancipation of women in Indonesia is still very relevant.

Suhartati continued that while Indonesian women should be developed further, following country’s development, this should be done while at the same time adhering to the norms and the dignity as Indonesian women who are aware of their noble duties as a wife and mother to their children.

With the development of increasingly sophisticated technology, all obstacles can be anticipated and resolved more easily than during the time when Kartini started her role as a driving force of Indonesian women emancipation about 112 years ago, Suhartati said.

This down-to-earth scientist who loves white bone, brown and pink colors is eager to see many Indonesian women succeed in the international arena, as well as winning a Nobel Peace Prize in any field as long as it is useful for all mankind in general and for the nation and state of Indonesia in particular.

Every human being wants to be the best of the best, and being the best, we would be an example for others and many people can be saved, Suhartati said.

Despite holding a Master’s degree in the field of Micropaleontology from Vrije Universiteit Amsterdam, Biodiversity from University of Brawijaya Malang and Doctor in the field of Fisheries and Marine from the same University in Malang, Suhartati said she often feels ashamed of herself when she meets with someone who she knows, and she cannot remember their name.

Despite this shortcoming, Suhartati has a heart as big as the ocean. Indeed, she says she feels happy when someone succeeds in something. This is the same emotion, Suhartati says as when she was still young and saw her mother distributing the rice harvest, or fish from their ponds, or produce from their family gardens to people who were needy. Additionally, Suhartati said she felt happy when she was young even when observing religious matters several times a day, or when she and her siblings would use new kerosene lamps — which were always provided by their mother — so that they could read every letter in the Holy Book clearly.

Suhartati is a portrait of modern Kartini, who has knowledge and manners that are exemplary for Indonesian women. No matter how much knowledge and treasure is bestowed by God to us, it is merely entrusted. Life will be more meaningful when we can feel the happiness of others after successfully doing a good job. In the same vein, life would be more beautiful if we share with others, because as human we will always coexist, and each time we mutual help and find happiness together, we are reminded that this is the meaning real life. Unfortunately, this is something that almost doen’t exist anymore.