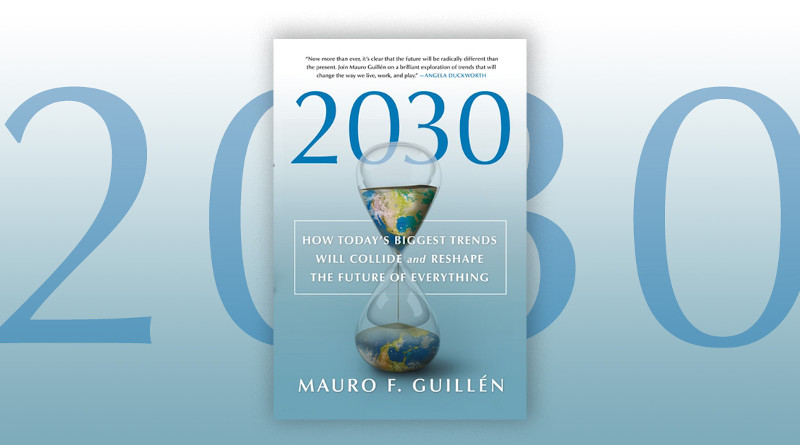 "2030: How Today's Biggest Trends Will Collide and Reshape the Future of Everything of Everything" by Mauro F. Guillen.

“Ideas are like rabbits. You get a couple and learn how to handle them, and pretty soon you have a dozen.”  This John Steinbeck quote, featured in the concluding chapter of Mauro F. Guillen’s 2030: How Today’s Biggest Trends Will Collide and Reshape the Future of Everything, is quite apt.  2030 is full of hypotheses and projections about, well, the state of the world in the year 2030.  The most obvious place to start would be shifting demographics.  The book spends much of its time writing about how the human population will look vastly different by 2030.

The most notable changes will be in Africa, which will have 450M new citizens by then.  This needn’t spell a Malthusian crisis, as many people have worried about for decades.  Africa’s population density is far below goliaths like India and China.  Likewise, Africa’s population boom will create great opportunities in terms of forcing the utilization or 500M acres of unused, but fertile, land.  This will have residual effects: increasing domestic industry (farmer supply sales and servicing, food processing, etc.) and food exports.  The explosion in the youth population will help to sustain a culture of technological innovation and adaptation.  2030 reports on the impressive rate at which Africans are adapting to cutting-edge concepts like mobile banking and cashless payments, outpacing even many Western nations.  A steady contingent of working-age men will also ensure that Africa won’t be left wanting, in terms of the workforce.

By contrast, the Western nations and East Asia are facing a historic inversion in the elderly-to-youth ratio.  The fertility rate in these developed countries has been plummeting below the population replacement level for decades.  Pair this with developed nations’ skyrocketing elderly populations due to increasing standards of living and you have a demographic ticking time-bomb.  According to the book, there will be 350M more of the 60+ than of the millennials by 2030. This will create a crisis in terms of sustaining workforces and the pension money that they produce.  Xenophobia is exacerbating this problem for many of these afflicted nations, as closed-border immigration policies deprive them of millions of young workers, particularly in under-staffed industries like elderly care.

Not all is bad for the elderly on the horizon, however.  A whole chapter of 2030 is devoted to the “Grey Generation”, both in terms of what the future will bear for them and in terms of how the elderly will shape the future.  The elderly of the present day and near future spent their working years in the post-WWII boom economy, in a society with much higher labor unionization, social safety net and lower cost of living.  As a result, the elderly are far wealthier now than they have been at any other time in history.  Thus, they have an awe-inspiring ability to shape consumer markets and the stock market with their purse strings.  Ironically, the elderly have thus far been largely overlooked by companies’ marketing strategies and product-development teams.  In the workplace, the elderly are also often undervalued; managers would prefer to nudge older workers into retirement, so that they can be replaced with younger hires who will command a lower salary and benefits.  The author warns against this.  As consumers, the elderly have unique needs and preferences, in addition to a lifetime’s accumulation of disposable income.  In the workplace, the most tenured workers have the most experience, patience and lack of frivolity.  As lifespans increase, many aging workers are also desiring to work longer, not merely for the money, but for the purpose and mental stimulation.  Corporate society and society as a whole have a lot to gain from their oldest members, but only if an atmosphere of respect and adaptability is adopted.

Another demographic that 2030 explores is women.  Happily, it reports that women are making incredible strides.  Perhaps most surprising is this projection: 55% of wealth will be owned by women by 2030.  A shockingly quick reversal of fortunes, considering that women were mostly excluded from the workforce until WWII and were even denied access to credit cards until 1974 in America.  The book explains that this is largely due to superior behavioral choices by women, such as high rates of secondary education and lower rates of alcohol abuse.  However, even among females, there is a growing inequality.  As the book notes, the aforementioned progress, “can produce a sharp bifurcation whereby only a segment of women enjoy the benefits while the rest are pushed to the fringes, resulting in more social conflict rather than less.”  Women who are unable to afford higher education or who drop out of the workforce for a few years to raise newborns vastly fall behind the career-oriented female college graduate.  This achievement gap can also be observed at the national level, between countries where women average few pregnancies and who start giving birth later in life, and countries with high fertility rates and rates of teenage and young adult pregnancies.

The book also explores trends in urbanization, technology, the sharing/gig economy and automation, among other topics.  I wish the book had covered environmental issues more; the urbanization section covers pollution and resource depletion to an extent, but I would have loved a whole chapter devoted to environmental renewal projects, renewable energy innovations and how such innovations will change human behavior.  Worth noting as well is the fact that the book is non-political, in the sense that it doesn’t speculate about the future of global diplomacy or the much-talked about rise in authoritarianism.  Guillen doesn’t speculate on the possible cold war brewing between China and America, Middle East turmoil, etc.  In a sense, this editorial choice makes the book less abstract.  The topics brought up in 2030, such as robots and the soaring median age, are much more observable and pertinent to the average reader.  2030: How Today’s Biggest Trends Will Collide and Reshape the Future of Everything is a book that will stimulate the imagination of everyone who reads it.  The writing style is very accessible and the timely topics will no doubt inspire many conversations amongst futurists and lay people alike.

Home » ‘2030: How Today’s Biggest Trends Will Collide And Reshape The Future Of Everything’ – Book Review