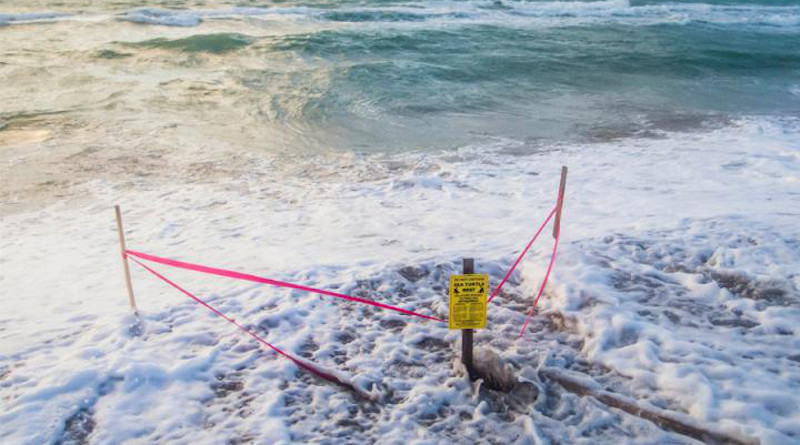 Ocean waves cover a sea turtle nest in Fort Lauderdale, Florida. Florida State University researchers found that sea-level rise is projected to submerge about 80 percent of current nesting habitat that is predicted to have a suitable climate for future egg incubation. Rising sea levels, a changing climate and coastal development each play a role in determining the availability of suitable nesting habitats in the future. This photograph was taken during permitted research activities. CREDIT: Photo by Matthew Ware / Florida State University

A research team led by Florida State University found that sea turtles in the U.S. will have less suitable nesting habitat in the future because of climate change and coastal development.

Researchers found areas that will remain or become suitable for sea turtle nesting in the future because of climatic changes and sea-level rise will be exposed to increased coastal development, hindering the ability of turtles to adapt to these disturbances. Their work was published in the journal Regional Environmental Change.

“A reduction in available nesting habitat coupled with the pressures associated with coastal development could likely have detrimental impacts on the reproductive output of sea turtle nesting areas in the U.S. and population stability,” said Mariana Fuentes, an assistant professor of oceanography in the FSU Department of Earth, Ocean and Atmospheric Science and the study’s lead author.

The results differ for specific places and species, but the overall picture is one of decreases in suitable nesting grounds and increasing pressure from coastal development.

A changing climate, rising sea levels and coastal development each play a role in determining the availability of suitable nesting habitats in the future.

Sea turtles need certain climate conditions for egg incubation, and a changing climate will mean different conditions for precipitation and temperature. Sea-level rise is another factor. It is projected to submerge about 80 percent of current habitat that is predicted to have a suitable climate for future egg incubation.

But sea-level rise is also projected to create new beaches. In fact, a 0.5-meter sea-level rise (a conservative estimate) is predicted to result in a net habitat gain for the sea turtle species the researchers studied. However, coastal development will be an issue in most of those areas, which will impact how well they function as nesting sites.

Researchers found a few regions in North Carolina and South Carolina that are projected to have high or very high climate suitability for sea turtle egg incubation, little risk from sea-level rise and no substantial housing growth, which will make them optimal nesting habitats. Identifying these areas could inform management and conservation policies.

In other places where development is expected to add pressure to sea turtles, management strategies, such as turtle-friendly lighting, removing beach debris and not disturbing nesting areas, will help minimize additional impacts of human activity on these animals.

“Sea turtles have existed for millions of years, and they have persisted through dramatic changes in climate in the past,” Fuentes said. “They have the ability to adapt to changing conditions, but coastal development and the unprecedented speed of current climate change are things they have never had to deal with, which may hinder their ability to adapt to the future.”