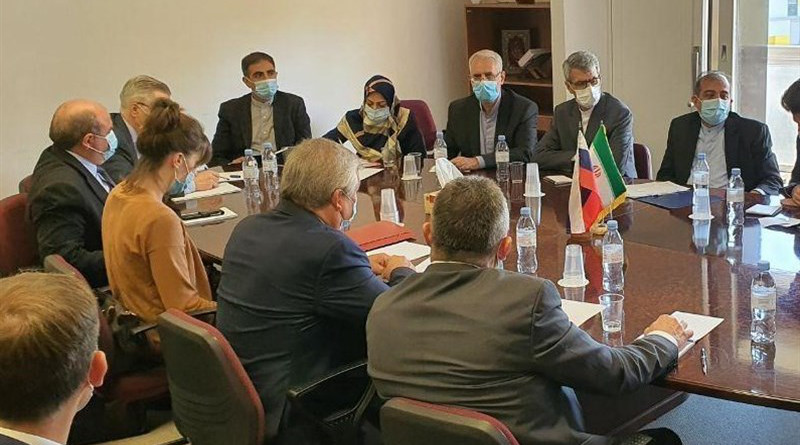 An Iranian diplomatic delegation taking part in the Astana Peace Process in Switzerland held separate talks with the Russian and Turkish representatives to coordinate plans for the Syrian Constitutional Committee’s success.

Senior assistant to the Iranian Foreign Minister, Ali Asghar Khaji, and the delegation accompanying him in a meeting of the Astana Peace Process held talks with Alexander Lavrentiev, the Russian president’s special envoy for Syria, on the sidelines of the third meeting of Syria’s Constitutional Committee in Geneva on Monday.

In the gathering, held at the office of Iran’s diplomatic mission in Geneva, the two sides discussed the developments surrounding Syria’s Constitutional Committee and its third meeting, which is underway under the auspices of the three guarantor states of the Astana Process, the United Nations Secretary-General’s special envoy for Syria, and the Syrian parties.

Khaji and Lavrentiev emphasized the necessity of support for the Constitutional Committee to help it go on and meet with success.

The Iranian diplomat highlighted the success achieved by the Astana Peace Process, and called for the continuation of consolations and coordination among the guarantor states of the Astana format.

For his part, Lavrentiev pointed to the role of the Astana Process in the settlement of the crisis in Syria, stressing the need to hold summit meetings in Tehran after a meeting of senior experts in Kazakhstan’s capital Nur-Sultan.

The two sides also underlined the need for closer consultations to ensure the Constitutional Committee’s success in its mission.

The two diplomats highlighted the principles of respect for Syria’s national sovereignty, unity, and territorial integrity agreed upon by the Astana Peace Process member states, and stressed the need to keep supporting the political process and Syrian-Syrian dialogue within the framework of the Constitutional Committee and the fight against terrorism.

Pointing to his last week’s visit to Syria and his meetings with the Syrian president and other officials, Khaji expressed Iran’s readiness to continue supporting the meetings of the Constitutional Committee without foreign interference.

For his part, Onal voiced Turkey’s preparedness to continue negotiations within the framework of the Astana Process and to hold consultations with Iran on this issue and other regional subjects.

The Iranian and Turkish diplomats expressed hope that Syria’s Constitutional Committee would go ahead with its plans successfully.