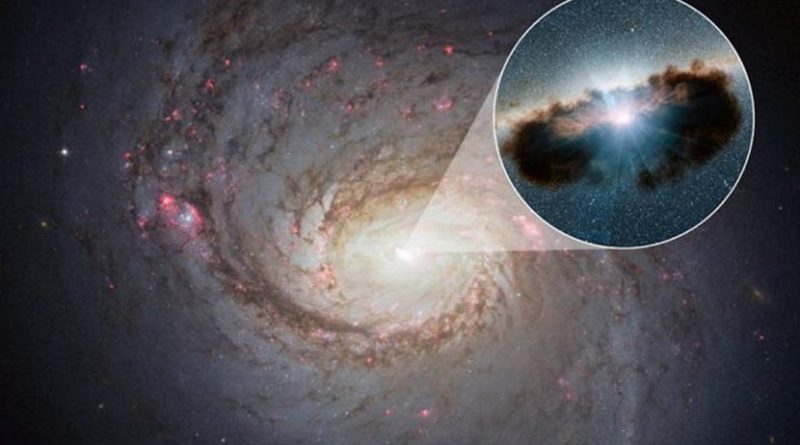 Galaxy NGC 1068 can be seen in close-up in this view from NASA's Hubble Space Telescope. This active black hole -shown as an illustration in the zoomed-in inset- is one of the most obscured known, as it is surrounded by extremely thick clouds of gas and dust that can be characterized using infrared and X-ray observations. Credit: NASA/JPL-Caltech.

Black holes appear to play a fundamental role in how galaxies evolve throughout their life during a phase in which they are active and consume material from the galaxy itself. During this phase, the galaxy hosts an active galactic nucleus (AGN), and the effect that this nuclear activity produces in the galaxy is known as AGN feedback.

This feedback can take place in different forms: the AGN can heat, disrupt, consume and remove the gas available to form new stars, preventing further galaxy growth. In fact, AGN feedback is now required by simulations of galaxy formation to explain the observations of massive galaxies at cosmological distances.

“If AGN feedback is not accounted for in the simulations,” said Cristina Ramos, “the predicted number of massive galaxies when the universe was younger is much higher than those that are observed”.

Directly studying the influence of nuclear activity on galaxy evolution is challenging because of the different spatial scales and timescales involved in the two processes. Massive galaxies host extremely compact supermassive black holes of millions or even billions of solar masses in their nuclei. It is estimated that the phases of nuclear activity last for a short period of time, between one and a hundred million years, whereas galaxy evolution processes, such as bulge growth or bar formation last much longer. Thus, in order to study the connection between the AGN and the host galaxy, “we need,” explained Claudio Ricci, “to look at the nucleus of galaxies, where the material that links them is found. This material consists mainly of gas and dust, which are normally studied in the infrared and X-ray band.”

In this review, Cristina Ramos Almeida, researcher at the Instituto de Astrofísica de Canarias (IAC), and Claudio Ricci, astrophysicist at the Institute of Astronomy of the Universidad Católica de Chile, tried to give a comprehensive view of the current understanding, thanks to infrared and X-ray studies, of nuclear obscuration in AGN. This has greatly improved in the last decade thanks to observing facilities such as CanariCam on the Gran Telescopio CANARIAS (GTC), located at the Roque de los Muchachos Observatory (Garafía, La Palma) and the Very Large Array Interferometer (VLTI) in the infrared range, as well as X-ray satellites like NuSTAR, Swift/BAT and Suzaku.

“We now know”, added Cristina Ramos, “that this nuclear material is more complex and dynamic than we thought a few years ago: it is very compact, formed by gas and dusty clouds orbiting the black hole and its properties depend on the AGN luminosity and accretion rate. Moreover, it is not an isolated structure but appears connected with the galaxy via outflows and inflows of gas, like streams of material flowing as part of a cycle. This gas flow cycle keeps feeding the black hole and regulates the formation of new stars in the galaxy”.

Very recently, the Atacama Large Millimeter/submillimeter Array (ALMA) has recently imaged for the first time the nuclear obscuring material in an active galaxy. ALMA operates in the millimiter and sub-millimeter range, and the latter traces the coolest dust and gas surrounding AGN. In the case of the galaxy NGC 1068, ALMA has shown that this material is distributed in a very compact disc-like shape of 7-10 parsecs (pc) diameter and, in addition to the regular rotation of the disk, there are non-circular motions that correspond to high-velocity gas outflowing from the galaxy nucleus.

“Over the next decade, the new generation of infrared and X-ray facilities will contribute greatly to our understanding of the structure and physical properties of the nuclear material,” said Claudio Ricci.