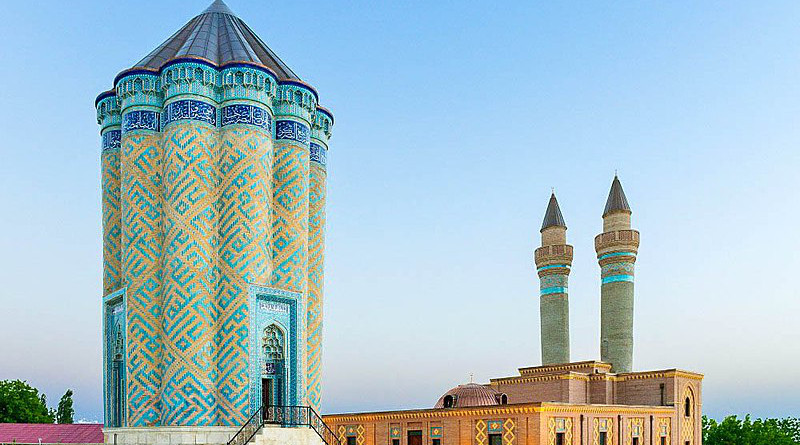 The Garabaghlar tomb, a historical-architectural monument of the Middle Ages in Garabaghlar village of Kangarli region; has been the embodiment of a unique architectural tradition that is admired by many distinguished diplomats in the ancient Autonomous Republic of Nakhchivan, the cradle of Azerbaijan’s earlier history and archaeology treasures.

When I visited Kangarli region together with Peruvian Former Minister of Foreign Affairs, Ambassador José Manuel Rodríguez Cuadros (who served also as the Ambassador of Peru in the UNESCO, 2012-2018), we spent sometime in the campus of this great cultural monument, together with other international guests.

As we visited the Garabaghlar Village, in September 2014, Ambassador Rodriguez stated that “this gorgeous part of Nakhchivan (Azerbaijan) has a tremendous potential to attract world’s famous historians, diplomats, scholars of religions and dignitaries that are attracted by cultural monuments, and the Garabaghlar tomb is equally important for European culture as the Cahuachi, the capital city of Nasca, and its culture happens to be for our country, Republic of Peru.”

With Ambassador Rodriguez we spent the whole afternoon speaking to local authorities as they provided a well detailed historical presentation about this monument and the site indeed was truly inspirational.

In addition to the tomb monument, there was also the main architectural complex, a double minaret structure and remainders of the religious building situated between them. It is believed that the double minaret was built in late XII century and at the beginning of XIII century; and the head arch joining the minarets belonged to the XIV century. The name of the Guti Khatin, the wife of Hulaku khan, ruler of the Elkhanis was written on the head arch, it is believed that the monument was built in honor of Guti Khatin.

In 1928, the scientific secretary of the “Nakhchivan Historical Investigation Society” M. Mirheydarzadeh identified that in the double minaret head arch inscription the following words were written in Arabic: “This sign of God is Guti khatin, Turkman”.

The main features of the tower shape tombs consisting of the vault and over round part were resembled in the Garabaghlar tomb. The 12 half-rostrums constitute the over ground composition of the Garabaghlar Tomb and monument. The projections give the image of a tower to the tomb side by side lessening the total size of the wall.

The walls of the 12 faced over the ground vault of the tomb were built of stones but its domes were built of baked bricks. The surface of the Garabaghlar tomb was decorated with the inscription and the geometric ornaments covered with red and turquoise glazed bricks.

The context of the inscriptions consists of the following “Lə iləhə illəllah Məhəmmədin Rəsulallah” – “There is no God, but God, Mohammad (s.ə.v.) is his follower.”  It was written inside the rhomb, repeated several times, that was arranged of the turquoise glazed bricks horizontally and unglazed red bricks were arranged vertically.

This monument reminds us of the ornamented inscription of the Barda tomb, that was built in the XIV Century.  The inscription belt in the upper part of the tomb was written in the Naskh letters. The composition feature, a great masterpiece of world architecture, Garabaghlar tomb has its four head arches.  These head arches are arranged in the North, South, West and East directions and give a 4 different angle facade image to the tomb.

The surface of the head arches was covered with glaze and decorated with geometrical and botanic designs. The most interesting among them is the main head arch in the Northern direction. The upper conic shape dome of the Garabaghlar tomb and its related inscriptions were destroyed and therefore to determine its exact date is impossible. But all investigations show that the tomb was built at the beginning of the XIV century.

According to the similarity between the Garabaghlar tomb and the Barda tomb, we can ascertain that both monuments were built at the beginning of the XIV century, both monuments belong to the same architectural school and Kangarli’s monument, unique tomb of international prestige, was built by Ahmad Ayyub oglu Hafiz Nakhchivani, a famous architect that has fundamentally shaped European architecture traditions, well over a hundred years before the heyday of Ottoman Empire Dominion across the Mediterranean. Hafiz Nakhchivani is also the author of the Barda tomb.

The deeply rooted culture embodied in this religious, cultural monument has increasingly motivated the national authorities of Azerbaijan to constantly maintain the structure of Garabaghlar monument and its Chairman of the Supreme Assembly of Nakhchivan Autonomous Republic Mr. Vasif Talibov, unlike any other public servant in the Caucasus and throughout Europe, has paid a special priority and invested large amounts of resources (from Nakhchivan’s treasury and Azerbaijan’s Central Government) towards the restoration of this monument and strengthening of sustainable tourism ventures that are visionary and motivated by a genuine drive of patriotism.

Renovation of historical and religious monuments has taken place diligently over the last ten years, despite of the economic blockade imposed by Armenian regime since the early 1990s. At a time when Nakhchivan is brutally isolated by the Armenian aggressive regime and is suffering from economic hardships that originate from this blockade, the Government of President Ilham Aliyev and Chairman Vasif Talibov; tourism projects are flourishing and cultural diplomacy paired with historical flair and artistic tapestry, are making Nakhchivan a crown jewel of Eurasian archaeological illumination.

Nakhchivan’s scenic mountain ridges, with colorful rock formations; enriched with ancient pottery artifacts and revived by the voices of rare bird species, scattered across the rocks; paired with a sophisticated culinary artistry and various five star hotel accommodations; have made this historic region of Azerbaijan to become a guiding example for other countries that aspire to implement sustainable tourism projects.

Its vast wildlife, well maintained forests, exquisite foliage, and gorgeous urban setting make Nakhchivan Autonomous Republic a cradle of cultural inspiration and natural allure across the Caucasus region and beyond.