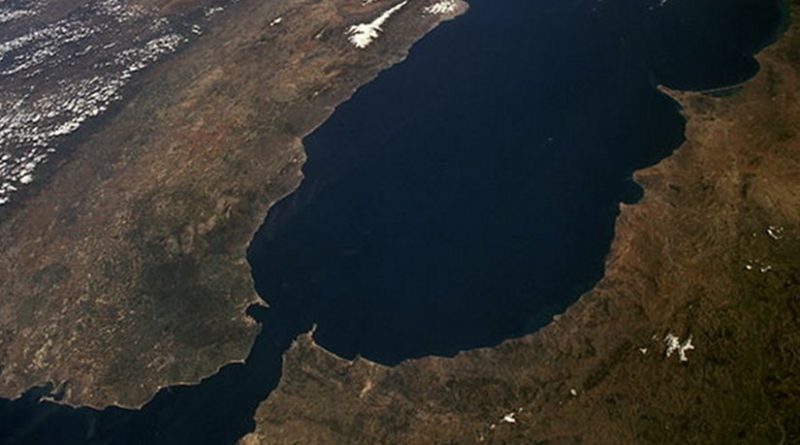 Strait of Gibraltar as seen from space, with the Iberian Peninsula on the left. Source: NASA.

As a result of global warming, more extremely salty water masses from the Mediterranean will be flowing into the North Atlantic through the Straits of Gibraltar.

This was the conclusion of researchers from Heidelberg University working with an international research team to investigate the dynamics of Mediterranean outflow. According to Dr. André Bahr from the Institute of Earth Sciences, this process could counterbalance the predicted drop in the North Atlantic’s salt content. Experts believe that the desalination brought on by massive melt waters from the Arctic and Greenland will significantly affect global ocean circulation and possibly weaken the Gulf Stream. The findings were published in the journal “Geology”.

To better understand the dynamics of the Mediterranean outflow, the researchers analysed its behavior under different climatic conditions in the geologic past. They studied core samples from the continental shelf off of southern Spain and Portugal obtained through the International Ocean Discovery Program.

“The data show that the Mediterranean current was subject to massive and in some cases extremely abrupt fluctuations over the last 150,000 years,” said Dr. Bahr.

The Heidelberg researcher explains that the strength of the current depends mainly on the intensity of the African monsoon, as is evident from the origin of the water that flows into the Atlantic. It derives for the most part from the eastern Mediterranean, where hot and dry conditions raise the salt content in the surface water. In winter these water masses cool, become denser and flow west at greater depths, where they leave the Mediterranean through the Straits of Gibraltar.

If strong monsoons in Northeast Africa increase the inflow of fresh water, the formation of this dense, salty water is inhibited and the outflow of Mediterranean water into the Atlantic weakened along with it. Conversely, the very dry conditions in the eastern Mediterranean that current climate models strongly predict will boost the salt content in the surface waters and thus strengthen the current from the Mediterranean.

“A comparison of the data we derived on the strength of the ocean circulation in the recent geologic past indicates that a strong Mediterranean outflow and the increased inflow of salt into the Atlantic at the end of the last warm cycle 120,000 years ago actually had a stabilising effect. This is because the circulation is significantly driven by the contrasts in salt content in the different water masses,” explained André Bahr.

For this reason, the geoscientist believes that tropical and subtropical climate changes and their impact on oceanography should figure more prominently in climate prognoses.

Researchers from Germany, the Netherlands, Japan, Spain, Portugal and Great Britain contributed to the study.