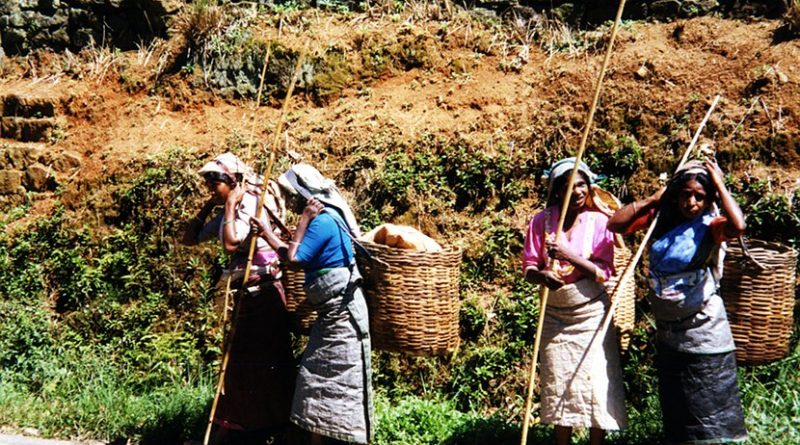 More than 2,000 protesters have demanded that the government of Sri Lanka increase the current daily minimum wage of tea estate workers from 500 rupees (US$2.90) to 1,000 rupees.

After employers only offered an increase to 600 rupees, protesters dressed in black gathered on Oct. 24 at the seafront Galle Face Green park in capital Colombo.

Tea worker salaries are revised once every two years, but the most recent collective wage discussions failed to reach agreement.

Tea workers were first brought from India some 150 years ago and suffer from substandard estate housing as well as a lack of health and other services.

Female tea picker Kandasamy Amurdhavalli, 67, from the Thalgaswala estate of Elpitiya in the island nation’s south, said her family can’t survive on the existing low wage.

“We pluck tea leaves even in the rain and under the hot sun,” she said. “Leopards attack us on the estates, but our wages are very poor. The estate owners never consider our fundamental rights.”

She said pay rate increases should reflect rising living costs, including for children’s schooling, and added that an advance for the annual Deepavali festival should be paid at the stipulated time.

Sri Lanka is the world’s second-largest exporter of tea and the industry is one of the country’s main foreign exchange earners, but tea estate workers are the poorest and are mainly landless.

He said as tea workers make a massive contribution to the economy, it is the responsibility of the government and companies to provide a realistic pay rise.

He noted that most tea industry workers had few personal possessions despite generations of toil.

Kithnan Selvaraj, president of All Ceylon Estate Workers Union, said estate workers received a daily wage in 2001 of 101 rupees, but 17 years later it had only increased by 399 rupees.

Minister of Plantation Industries Navin Dissanayaka told media representatives that the industry could not afford to pay a minimum of 1,000 rupees per day due to already high production costs.