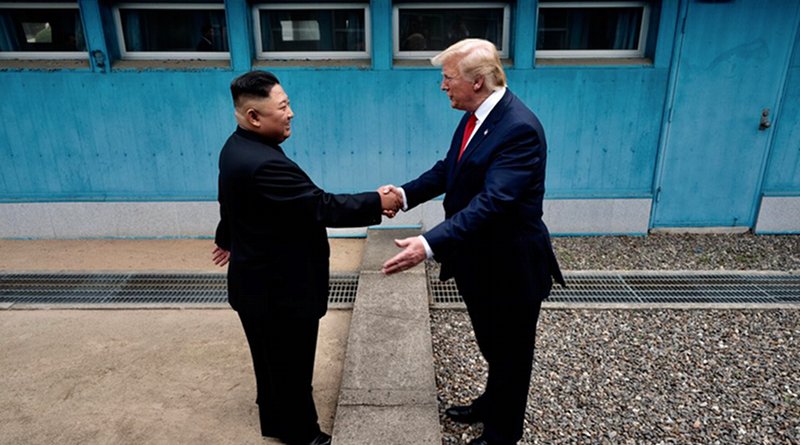 Following their first-ever rendezvous in Singapore in June 2018 and a “bromance” lasting over a period of several months, a much-anticipated two-day summit meeting between capricious North Korean leader Kim Jong-un and Donald Trump was held at the Metropole Hotel in Hanoi, Vietnam, on February 27–28, 2019.

On the last day of the Hanoi Summit, however, the White House abruptly announced that the summit was cut short and that no agreement was reached. Trump later clarified that it was due to North Korea’s insistence on ending all sanctions. The real reason of the foundering of the much-hyped North Korea nuclear negotiations, however, can be discovered in hardly noticed news headlines weeks after the summit.

In March last year, Adam Taylor and Min Joo Kim reported for the Washington Post [1]: “In broad daylight in late February, just days before President Trump met with North Korea’s Kim Jong-un in Hanoi, a group of masked men forced their way into the North Korean Embassy in Madrid. The intruders tied up staff and took computers and mobile phones before fleeing.

“The raid was initially a mystery, but the culprit was soon revealed: Free Joseon, an organization that calls for the overthrow of Kim’s dynasty. More details emerged this week as a Spanish judge lifted a secrecy order on the embassy raid case and claimed one of the perpetrators had later shared stolen material from the raid with the FBI.

“More startling still to North Korea watchers, however, was one of the names of the suspects Spain would reportedly seek to extradite from the United States: a Mexican citizen by the name of Adrian Hong Chang. To many, that name rang a bell.

“Adrian Hong had been a prominent figure in the tightknit world of defectors and activists in Washington and Seoul a decade earlier. Hong had spent some of his childhood in Mexico and later studied at Yale University, where he formed a now well-known NGO that campaigned for change in North Korea. He was a regular at government events and in newspaper op-eds.

“Some said the statements by Free Joseon fit in with the man they knew. For years, Hong has sought to establish a government-in-exile for North Korea. Lee Wolosky, a lawyer with Boies Schiller Flexner and a former State Department official, issued a statement on the group’s behalf Wednesday that said ‘the United States and its allies should support’ groups that oppose the North Korean government.

“Hong later formed Pegasus Strategies, an advisory firm, and was listed as president of a North Korea-focused group called the Joseon Institute. He appears to have broadened his interests to include the Middle East, traveling to Libya in 2011. ‘I consider the Arab Spring a dress rehearsal for North Korea,’ he said in an interview with the National that year.

“Park Sang Hak, a prominent North Korean defector, said he had last seen Hong in Washington in June 2018, when they both attended a meeting at the Director of National Intelligence. There has been widespread speculation in both the Spanish and South Korean media that the group has ties to the CIA. South Korea’s Munhwa Ilbo, the country’s main evening conservative newspaper, published an editorial Thursday that said the ‘US seems to be unofficially involved and providing support’ to Free Joseon.

“State Department spokesman Robert J. Palladino said Tuesday that the U.S. government ‘had nothing to do’ with the embassy incident. Kim Jung-bong, a former NIS official, said while he thought the Free Joseon movement was probably in contact with the CIA, he doubted the U.S. intelligence community would have supported the embassy raid. ‘Their moves were too sloppy,’ Kim Jung-bong said.

“It was not immediately clear how the group could have afforded to carry out raids in a foreign country or hire a prestigious law firm such as Boies Schiller Flexner.”

After reading the excerpts, it becomes abundantly clear that Adrian Hong was a CIA asset and the brazen tactics of raiding North Korea’s embassy in Madrid were deliberately made to look “sloppy” because the raid’s purpose was nothing more than sending a message to the North Korean leader before the Hanoi Summit.

Although Trump was eager to get a coveted feather in his diplomatic cap by making Kim Jong-un agree to discard North Korea’s nuclear program, the US national security establishment was staunchly against the negotiations since the beginning.

When Trump was holding a summit with the North Korean leader in Singapore in June 2018, the mainstream media was publishing fabricated satellite images and speculating that Trump was being duped by Kim and North Korea had shifted its nuclear arsenal at a secret location in the mountainous region bordering China.

Being an outsider, not only in North Korea nuclear negotiations but in almost all the conflicts Trump inherited from the Obama administration, he was hoodwinked by his own generals. After Donald Trump’s inauguration as the US president in January 2017, he had delegated operational-level decisions in conflict zones such as Afghanistan, Iraq and Syria to the Pentagon.

Former Secretary of Defense James Mattis and former National Security Advisor H.R. McMaster represented the institutional logic of the deep state in the Trump administration and were instrumental in advising Donald Trump to escalate the conflicts in Afghanistan and Syria.

They advised Trump to increase the number of American troops deployed in Afghanistan from 8,400 to 14,000. And in Syria, they were in favor of the Pentagon’s policy of training and arming 30,000 Kurdish border guards to patrol Syria’s northern border with Turkey.

Both the decisions spectacularly backfired on the Trump administration. The decision to train and arm 30,000 Kurdish border guards infuriated the Erdogan administration to the extent that Turkey mounted three military operations in northern Syria.

But thankfully, the conflict in Syria is gradually winding down. Before the evacuation of 1,000 American troops from northern Syria last year, the Pentagon had 2,000 US forces in Syria. After the drawdown of US troops at Erdogan’s insistence in order for Ankara to mount a ground offensive in northern Syria, the US has still deployed around 1,000 troops, mainly in oil-rich eastern Deir al-Zor province and at al-Tanf military base.

The number of US troops deployed in Afghanistan did not exceed beyond 30,000 during George Bush’s tenure as the American president, and soon after occupying Afghanistan, Washington invaded Iraq in March 2003 to expropriate its 140 billion barrels proven oil reserves, and American resources and focus shifted to Iraq.

It was the ostensibly “pacifist and noninterventionist” Obama administration that made the Afghanistan conflict the bedrock of its foreign policy in 2009 along with fulfilling then-President Obama’s electoral pledge of withdrawing American forces from Iraq in December 2011, only to be redeployed a couple of years later when the Islamic State overran Mosul and Anbar in Iraq in early 2014.

At the height of the surge of the US troops in Afghanistan in 2010, the American troops numbered around 100,000, with an additional 40,000 troops deployed by the rest of the NATO members, but they still could not manage to have a lasting impact on the relentless Taliban insurgency.

Nevertheless, although full withdrawal of US troops from Afghanistan was originally scheduled for April next year, according to terms of peace deal reached with the Taliban on February 29, President Trump hastened the withdrawal process by making an electoral pledge earlier this month that all troops should be “home by Christmas.” “We should have the small remaining number of our BRAVE Men and Women serving in Afghanistan home by Christmas,” he tweeted on October 7.

Even the arch-foes of the US in Afghanistan effusively praised President Trump’s peace overtures. Taliban spokesman Zabihullah Mujahid told CBS News [2] in a phone interview earlier this month, “We hope he will win the election and wind up US military presence in Afghanistan.”

The militant group also expressed concern about President Trump’s bout with the coronavirus. “When we heard about Trump being COVID-19 positive, we got worried for his health, but it seems he is getting better,” another Taliban senior leader confided to reporter Sami Yousafzai.

The Taliban also noted it thinks highly of President Trump’s “America First” creed. “It is the slogan of Trump from the start that they are not cops for the world and don’t want a single flag and anthem for the globe, but their priority is America first,” Taliban spokesman Mujahid said.

Another senior member of the Taliban praised the president’s honesty. “Honestly, Trump was much more honest with us than we thought, we were stunned by his offer to meet Taliban at Camp David.” Last year, President Trump disclosed that he had invited the Taliban for peace talks at Camp David, but later he canceled the plans after a US soldier was killed in Afghanistan.

Much to the dismay of the US national security establishment, the bonhomie between the Taliban and the Trump administration has reached the point that the Washington Post is cooking up reports [3] that the US Air Force has been given an additional responsibility to act as the “Taliban Air Force” by bombing the Islamic State targets in order to assist the Taliban win over the rival militant group’s territory in Afghanistan.

Lastly, Iran-backed militias recently announced [3] “conditional” cease-fire against the US forces in Iraq on the condition that Washington present a timetable for the withdrawal of its troops. The US-led coalition has already departed from smaller bases across Iraq and promised to reduce its troop presence from 5,200 to 3,000 in the next couple of months, though Iraq’s parliament passed a resolution in January urging the full withdrawal of US troops.