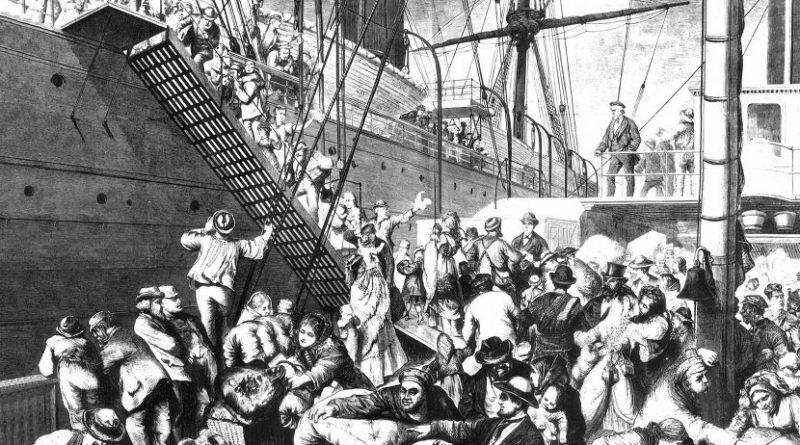 From the Old to the New World" shows German emigrants boarding a steamer in Hamburg, Germany, to come to America. Published in Harper’s Weekly, (New York) November 7, 1874, Wikipedia Commons.

n the 19th century, over 5 million Germans moved to North America. It was not only a century of poverty, war and revolutions in what is now Germany, but also of variable climate. Starting at the tail end of the cold period known as the Little Ice Age, the century saw glacier advances in the Alps, and a number of chilly winters and cool summers, as well as other extreme weather events such as droughts and floods.

“Overall, we found that climate indirectly explains up to 20-30% of migration from Southwest Germany to North America in the 19th century,” says Rüdiger Glaser, a professor at the University of Freiburg, Germany, and lead-author of the Climate of the Past study.

The researchers could see a climate signature in most major migration waves from Southwest Germany during the 19th century. “The chain of effects is clearly visible: poor climate conditions lead to low crop yields, rising cereal prices and finally emigration,” says Glaser. “But it is only one piece of the puzzle.”

“Our results show that the influence of climate was marked differently during the different migration waves,” adds Iso Himmelsbach, another of the researchers at the University of Freiburg who took part in the study.

The team studied official migration statistics and population data from the 19th century, as well as weather data, harvest figures and cereal-price records. They focused on the region that is now the Baden-Württemberg state, where many of the migrants – such as Charles Pfizer of pharmaceutical fame – originated from. They started by identifying the major migration waves and then investigated to what extent climate played a role in driving people to North America during each of them.

The first wave followed the eruption of the Tambora volcano in Indonesia in 1815. The volcanic ash and gases spewed into the atmosphere caused temperatures to drop around the world for a few years after the eruption. The ‘year without summer’, 1816, was wet and cold causing widespread crop failures, famine and emigration.

“Another peak-migration year, 1846, had an extremely hot and dry summer leading to bad harvests and high food prices,” says Annette Bösmeier, a researcher at the University of Freiburg who also involved in the study. “These two years of high migration numbers appear to be quite strongly influenced by climate changes, while for other migration waves other circumstances appeared to be more important,” she adds.

Climate was a less significant factor in driving the largest emigration wave, from 1850 to 1855, the researchers found. While unfavourable weather affected crops resulting in low harvests during this time, other factors also drove up food prices. During the Crimean War (1853-1856), for example, France banned food exports, putting pressure on the German grain markets. At the time, the authorities of Baden also paid the poorest people to leave the country in an attempt to prevent uprisings and save on welfare. This, too, drove up emigration numbers.

“Migration in the 19th century was a complex process influenced by multiple factors. Lack of economic perspectives, social pressure, population development, religious and political disputes, warfare, family ties and the promotion of emigration from different sides influenced people’s decision to leave their home country,” concludes Glaser. “Nevertheless, we see clearly that climate was a major factor.”

In the past few years, climate has taken a central stage in migration discussions since future climate change is expected to lead to mass migration (‘climate refugees’), as sea levels rise and extreme weather events, such as floods, droughts and hurricanes, become more frequent. The team hope their study can shed some light on the various factors influencing migration and how important climate can be in triggering mass movements of people.