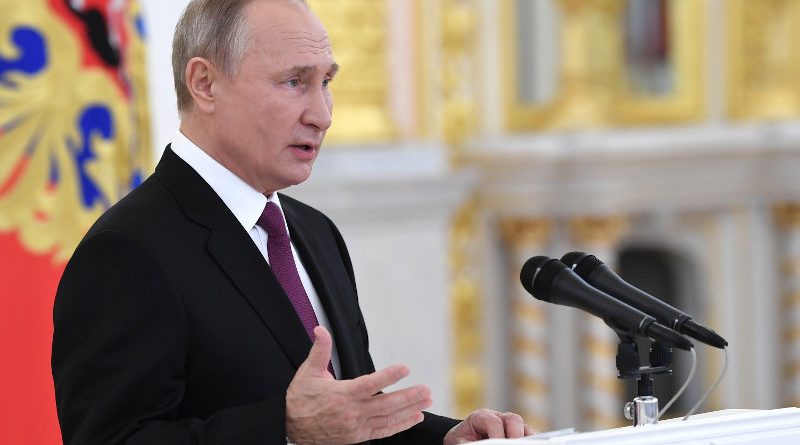 While receiving newly arrived Ambassadors accredited to the Russian Federation from different foreign countries including Rwanda, Gambia and Central African Republic, President Vladimir Putin stressed the importance of coordinating global efforts to ensure stability and halt the spread of coronavirus pandemic around the world.

Despite the well-known and necessary restrictions associated with the coronavirus pandemic, the ceremony signifying the official beginning of their diplomatic mission took place in the Alexander Hall of the Grand Kremlin Palace.

Putin said that this year has been very difficult and unpredictable as the world is currently facing the coronavirus pandemic, and this required the adoption of extraordinary measures both in Russia and in all countries.

“As you know, Russia has developed and is already using the world’s first vaccine against coronavirus, Sputnik V, and the second EpiVacCorona has also been registered. Now the most important thing is to ensure mass production in Russia and start a public vaccination campaign. Our third vaccine is also almost ready,” he told the ambassadors’ gathering.

According to reports, Russia was one of the first to announce the development of a vaccine in August — dubbed Sputnik V after the Soviet-era satellite — but before the start of final clinical trials. It was developed by the Gamaleya Research Institute of Epidemiology and Microbiology under the Russian Health Ministry.

The second vaccine, EpiVacCorona, developed by the Vector Center has also obtained registration.

“We are ready to share our experience with all interested states and international agencies. Together with a number of our foreign partners, we are working out the issues of launching the production of these vaccines locally at our partners’ production base,” the president added.

By tradition, Putin said a few words about Russia’s relations with each of the countries that ambassadors represent in the Russian Federation.

In accordance with the agreements reached at this summit, Russia and Rwanda are expanding their cooperation in power engineering, including the nuclear power industry and geological prospecting. Russia continues training Rwandan civilian and military personnel at Russian universities.

Alhagi Nyangado is the new Ambassador from Republic of the Gambia. Russia has stable ties with The Gambia. Putin stressed the development of contacts on international issues and to deepen cooperation in different areas, including in the military-technical and education areas.

In conclusion, President Vladimir Putin said that Russia and its people look forward to seeing these relations develop dynamically for the benefit of the people, and in the interest of international security and stability.