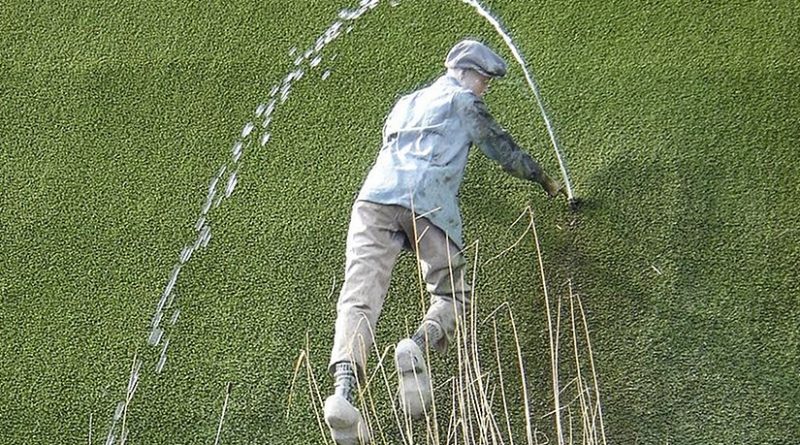 (FPRI) — With Mary Mapes Dodge’s Hans Brinker, or the Silver Skates, the English-speaking world took to heart the tale of a Dutch boy who saves his beloved homeland from certain flood by plugging a leaky dike.  Briefly: Happening home as dark approached, the lad espied a leak in one of Haarlem’s many dikes. Grasping the potential calamity, the boy stemmed the flow with his finger, suffering cold and solitude through the night until the townspeople discover him and mend the leak. The boy becomes a hero, having saved Haarlem from deluge.

The boy-cum-hero was more than brave. He demonstrated prescient awareness, grasping the potential magnitude of the situation. He responded with appropriate measure, running for help or stuffing the dike with soil would have left the danger unguarded. The boy then readily called for help at first chance.

The analogy to Ankara?  With Turkey’s economy threatened by turbulent waters, President Recep Tayyip Erdogan continues to pose as his country’s indispensable protector. However,  he shows poorly in comparison to Haarlem’s little savior. The president’s most recent maneuver to keep the country’s economic ship aright—an enormous transfer of state-owned corporate shares to Turkey’s first sovereign wealth fund—will fail to achieve its intended aims. Any dissenting counsel to this undertaking will be prone to the president’s usual dismissal.

The republic’s economy will instead likely worsen. As growth slows and consequent discontent rises, Erdogan will not retreat from his autocratic drive to direct the economy himself. For now, Turkey’s once-emerging democracy will instead continue to deconsolidate as Erdogan adds further economic power to his already dominant political role.

The Economy:  Red Sky at Morning

On February 6, the Justice and Development Party (AKP) government’s privatization administration announced the transfer of billions of dollars worth of  government-owned shares into a new sovereign wealth fund (SWF). These involve several of Turkey’s best performing companies and banks, including Turkish Airlines  and Halkbank with a combined value of $3 billion, in which the state has 49.1 and 59.1 percent of the shares, respectively. Also included in the mass transfer were the Borsa stock exchange and BOTAS—the state-owned natural gas pipeline operator. The stated purpose of this asset transfer is to reassure foreign lenders whose confidence in Turkey has steeply declined.

Why will this move fail? Turkey’s SWF is a sharp departure from the international norm. SWFs are commonly funded out of revenue generated by a country’s natural resources or foreign exchange reserves and established when there exists a significant budgetary surplus.  Moreover, SWFs typically invest globally. In contrast, the assets transferred this month come from domestic banks and firms, not from commodity revenues or reserves.  Although Turkey’s budget deficit is currently somewhere between 1-2%, 2016 saw a marked increase in budget expenditures on health, welfare, and pensions; and none are poised to abate. Furthermore, the AKP government is likely to use the SWF as leverage to borrow for mega-infrastructure projects at home, rather than pursue investment opportunities abroad. Such a build-up of debt is likely to decrease rather than increase investor confidence in the Turkish economy.

There are few indicators suggesting that the Turkish economy will resume the robust growth that propelled it to become the world’s 17th largest economy. The attempted coup on July 15, 2016, and its aftermath greatly shook investors and creditors alike. In the third quarter of 2016, Turkey’s economy contracted for the first time in several years to levels lower than predicted. Last September, Moody’s Investor Service downgraded Turkey’s sovereign credit rating to junk status.  The Turkish lira has dramatically declined against the dollar, falling 23.73 percent between September 2016 and February 2017.

Not all of Turkey’s current economic woes are linked to July 15th fallout. Turkey continues to struggle with a growing current account deficit. It is forecasted at $34.3 billion for 2016 (an increase of $2.1 billion from the previous year). This is nothing new—Turkey has been struggling to keep its current account out of a deep red since 2010.  And due to Russian boycotts and terror attacks, Turkey’s tourism industry was already suffering mightily before the attempted coup. Tourism’s contribution to GDP dropped from  twelve percent in 2014 to 4.5 percent in 2015. Employing eight percent of the country’s workforce, this industry’s shrinkage is being felt.

The sweeping shift of wealth into Turkey’s SWF is the latest step in Erdogan’s drive to centralize authority under his own personal executive control. Should he win April’s referendum on the expansion of Turkey’s presidential powers, authority over the SWF would no doubt transfer to him, since the position of its current overseer, the prime minister, would be abolished. This is especially dangerous, as SWF transactions will be unaccountable to either parliament or Turkey’s High Court of Auditors, thereby giving a uniquely dominating president tremendous sway over the use of state funds.

This would conform with a consistent pattern of incremental power consolidation, in economic affairs as well as in the political realm. The AKP party has unrelentingly relied on the crony issuance of tenders for unnecessary infrastructure projects as a key means of securing political influence; Turkey’s SWF is simply another chapter. Furthermore, AKP’s leader regularly disregards sound economic counsel in favor of political expediency. For example, Erdogan has for years shouted down top economic advisors seeking to stem inflation by increasing interest rates, a widely accepted remedy. The Gulenist witch hunt following the July 15 coup attempt provides a further example of damaging market interference. By executive order under a state of emergency, hundreds of businesses were shuttered, eliminating in many cases competitors of AKP-aligned enterprises and banks.

Given the breadth of Turkey’s current economic challenges, Erdogan’s continued reliance on his tried playbook will turn up insufficient. The demographic bulge that fueled Turkey’s post-2002 Wirtschaftswunder is coming to a close. Of Turkey’s top ten export destinations, six are presently European Union member states, a trade zone whose “outlook is surrounded by higher-than-usual uncertainty” and moderate recovery remains nascent. Nor will the resumption of trade with Russia via the recent rapprochement do much. At best, the countries may return to the same steady levels that preceded the crisis-provoking downing of a Russian jet in November 2015. And don’t expect a return of Russia’s tourist masses as long as ISIS and PKK terror attacks continue. This insecurity and Turkey’s noteworthy political risk are especially damaging to prospects of foreign direct investment at a time when multinational corporations appear on a full-fledged retreat worldwide.

Despite Turkey’s autocratic regression over the past several years of AKP rule, Erdogan and his party could become vulnerable. When polled, Turks regularly assign their greatest concerns to security and the economy. Although the AKP won 40.9 and 49.5 percent in the last two multiparty parliamentary elections, there is now no end in sight to the current fighting with the Kurdish Workers Party (PKK). If, added to this, there is a severe contraction of Turkey’s economy, it could cost AKP and the president dearly at the ballot box.

In sum Erdogan’s “finger in the dike” does not seem likely to bar the flood. And, absent an uncharacteristic change of tack—such as a willingness to better heed sound economic counsel or greater inclusion of private sector actors unsupportive of his political agenda—the dyke could well give way.

Unfortunately, Erdogan’s reliance on political charisma and personal power-projection tends to preclude rethinking or retreat, particularly before the looming mid-April referendum. Unfortunately for our Turkish friends, it may thus be a long time before they see a red sky on the evening’s horizon.

About the author:
*Richard Kraemer is a Fellow of FPRI’s Eurasia Program and the senior program officer for Afghanistan, Iran, and Turkey at the National Endowment for Democracy. Previously, he oversaw projects in the aforementioned countries and the Levant at the Center for International Private Enterprise. Earlier, he further taught and researched at the Jagellonian University in Poland. He is also an affiliated expert of the Public International Law and Policy Group, having advised the governments of Georgia and Montenegro.

Home » No ‘Hero Of Haarlem’ In Ankara – Analysis