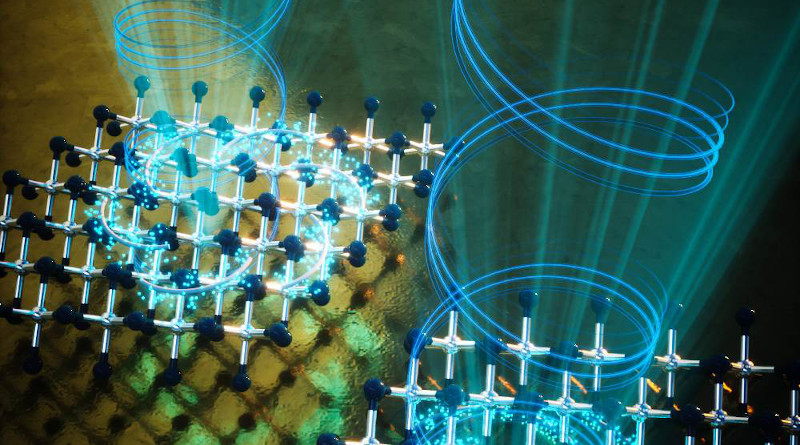 Beams of circularly polarized light (shown as blue spirals) can have two different mirror-image orientations, as shown here. When these beams strike a sheet of titanium diselenide (shown as a lattice of blue and silver balls), the electrons (aqua dots) in the material take on the handedness of the light's polarization. Image: Ella Maru Studio

Some molecules, including most of the ones in living organisms, have shapes that can exist in two different mirror-image versions. The right- and left-handed versions can sometimes have different properties, such that only one of them carries out the molecule’s functions. Now, a team of physicists has found that a similarly asymmetrical pattern can be induced and measured at will in certain exotic materials, using a special kind of light beam to stimulate the material.

In this case, the phenomenon of “handedness,” known as chirality, occurs not in the structure of the molecules themselves, but in a kind of patterning in the density of electrons within the material. The researchers found that this asymmetric patterning can be induced by shining a circularly polarized mid-infrared light at an unusual material, a form of transition-metal dichalcogenide semimetal called TiSe2, or titanium diselenide.

The new findings, which could open up new areas of research in the optical control of quantum materials, are described today in the journal Nature in a paper by MIT postdocs Suyang Xu and Qiong Ma, professors Nuh Gedik and Pablo Jarillo-Herrero, and 15 colleagues at MIT and other universities in the U.S., China, Taiwan, Japan, and Singapore.

The team found that while titanium diselenide at room temperature has no chirality to it, as its temperature decreases it reaches a critical point where the balance of right-handed and left-handed electronic configurations gets thrown off and one type begins to dominate. They found that this effect could be controlled and enhanced by shining circularly polarized mid-infrared light at the material, and that the handedness of the light (whether the polarization rotates clockwise or counterclockwise) determines the chirality of the resulting patterning of electron distribution.

“It’s an unconventional material, one that we don’t fully understand,” says Jarillo-Herrero. The material naturally structures itself into “loosely stacked two-dimensional layers on top of each other,” sort of like a sheaf of papers, he says.

Within those layers, the distribution of electrons forms a “charge density wave function,” a set of ripple-like stripes of alternating regions where the electrons are more densely or less densely packed. These stripes can then form helical patterns, like the structure of a DNA molecule or a spiral staircase, which twist either to the right or to the left.

Ordinarily, the material would contain equal amounts of the right- and left-handed versions of these charge density waves, and the effects of handedness would cancel out in most measurements. But under the influence of the polarized light, Ma says, “we found that we can make the material mostly prefer one of these chiralities. And then we can probe its chirality using another light beam.” It’s similar to the way a magnetic field can induce a magnetic orientation in a metal where ordinarily its molecules are randomly oriented and thus have no net magnetic effect.

But inducing such an effect in the chirality with light within a solid material is something “nobody ever did before,” Gedik explains.

After inducing the particular directionality using the circularly polarized light, “we can detect what kind of chirality there is in the material from the direction of the optically generated electric current,” Xu adds. Then, that direction can be switched to the other orientation if an oppositely polarized light source shines on the material.

Gedik says that although some previous experiments had suggested that such chiral phases were possible in this material, “there were conflicting experiments,” so it had been unclear until now whether the effect was real. Though it’s too early in this work to predict what practical applications such a system might have, the ability to control electronic behavior of a material with just a light beam, he says, could have significant potential.

While this study was carried out with one specific material, the researchers say the same principles may work with other materials as well. The material they used, titanium diselenide, is widely studied for potential uses in quantum devices, and further research on it may also offer insights into the behavior of superconducting materials.

Gedik says that this way of inducing changes in the electronic state of the material is a new tool that could potentially be applied more broadly. “This interaction with light is a phenomenon which will be very useful in other materials as well, not just chiral material, but I suspect in affecting other kinds of orders as well,” he says.

And, while chirality is well-known and widespread in biological molecules and in some magnetic phenomena, “this is the first time we’ve shown that this is happening in the electronic properties of a solid,” Jarillo-Herrero says.

Home » Using Light To Put A Twist On Electrons