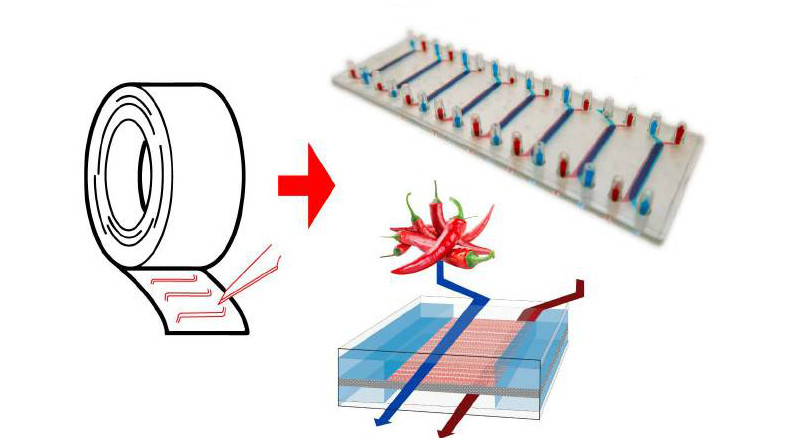 A simplified schematic of the gut-on-a-chip system made with double-sided tape.

Double-sided tape – basically the same as you might have at home – was used by researchers in Sweden to assemble a low-cost version of advanced chip devices for simulating the functions of human organs. The technique could dramatically lower cost barriers for labs that test new drugs and analyze how the body reacts to them.

Publishing recently in Lab on a Chip, the researchers reported the successful re-creation of a gut, substituting ordinary double-sided adhesive tape and off-the-shelf plastics for the expensive materials and techniques typically used to make state-of-the-art “organ-on-a-chip” systems.

To show that their tape-based organ-on-chip really behaves similarly to a human gut, the researchers tested it with a common food compound: capsaicinoids, the active ingredient in chili peppers. When feeding it the equivalent of a habanero pepper, the chip-based gut responded as expected: with some irritation.

Thomas Winkler, a researcher in Micro- and Nanosystems at KTH Royal Institute of Technology in Stockholm, says that the research was aimed at helping more labs with limited resources get access to a prohibitively expensive technology that promises accelerated development of new drugs and advanced personalized medicine.

Organs-on-Chips are clear, see-through plastics about the size of a computer memory stick that contain hollow channels. These channels are lined by living cells and tissues that mimicorgan-level physiology.

The chips are typically fabricated using expensive techniques similar to those used in computer microchip manufacturing, and rely on adhesives, gaskets, or custom-made clamping systems to keep the separate layers sealed together.

The new technique creates the hollow channels instead by cutting them out of double-sided adhesive tape. Besides the tape itself, creating a model of a physiological barrier such as the gut requires commercially available parts such as a permeable membrane for the cells to grow on, which is used in comparable organs-on-chips, and plastic foil to seal it off, Winkler says. The only equipment needed would be an automated knife cutter, which retails at about EUR 100.

“The tape replaces all the critical structural elements, by knife-cutting it to shape, and makes them fit together easily because tape inherently sticks to the permeable membrane and other materials.

“This technique could democratize the organ-on-chip technology for labs working on drug development in lower-resource environments,” Winkler says. “It makes it more affordable in terms of the equipment needed for making the chips in-house, as well as in terms of manufacturing commercially available chips.”