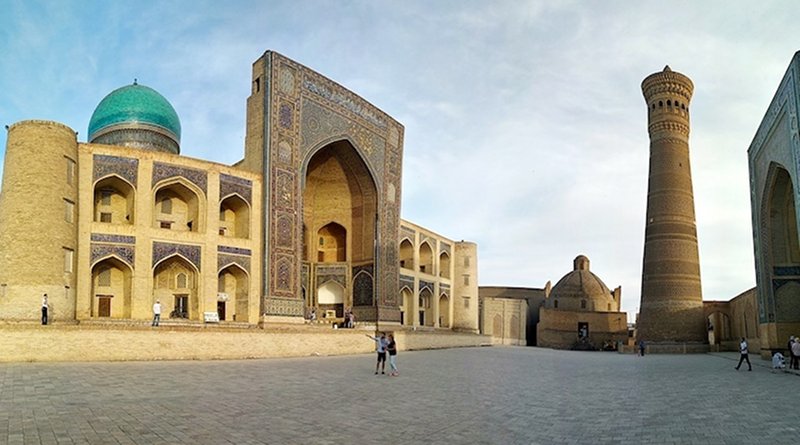 The Kalyan minaret is one of the most prominent landmarks in the city of Buhara. The minaret was built by the Qarakhanid ruler Mohammad Arslan Khan in 1127 to summon Muslims to prayer five times a day. Credit: Kalinga Seneviratne

The city of Bukhara was a major trading hub of the ancient Silk Routes that connected Asia to the Arab world and Europe. With the Uzbekistan government’s lifting of restrictions on foreign tourists in 2016 and global interests on the ancient Silk Routes gathering momentum, this 2000-year-old city is poised to become a major tourist hub of Central Asia.

The city grew up nourished by the merchants that arrived from Persia, India, China and Russia and it was a popular and important resting point in the development of these routes between the 10th and 17th centuries.

Bukhara was not only a trading post, but also a centre of scholarship, religion and culture. It is a good example of a well-preserved Persian-influenced Islamic city going back to the 8th century.

Many of its grand Persian-style Madrasah buildings have been restored since declared a UNESCO Heritage Site in 1993. Today, however, they are not centres of Islamic learning but host art galleries, souvenir shops, restaurants and performing theatre – perhaps a legacy of its days as part of the Soviet Union.

Many local and foreign investors, particularly from Turkey and Russia, are building small hotels within the preserved historic city, reflecting the style of the ancient Madrasahs.

Nekrasova Elizaveta, a local retired anthropologist, is not entirely happy with the frantic tourist infrastructure development of the ancient city. Though Bukhara holds a lot of scope to attract millions of tourists a year, she argues that tourism development should not be just for the sake of the tourist dollar but should convey the rich cultural knowledge of its people and civilisation.

“There are over 140 sites of great cultural interest in Bukhara,” she told IDN. “You need to choose sites that will interest and educate tourists.”

She explained that the old city area, where most of the development is taking place, had an ancient water system with about 100 reservoirs and an underground canal system taking water to the communities. “You can find it in the old sector, and this could be a tourist attraction” argues Elizaveta, pointing out that new guidebooks are needed to alert travellers to the unique architecture and history of the city.

There are mulberry trees full of juicy mulberries – both red and white – during the spring season now. They basically grow in the ‘wild’ along the canals and walkways of the old city, with both locals and tourists helping themselves to the berries as they walk the footpaths.

It is believed that Uzbekistan is discussing introducing a Silk Route visa similar to Europe’s Schengen visa with neighbouring Central Asian countries. Since introducing an electronic visa system and visa-free travel for citizens of many European and Asian countries in 2017, Uzbekistan has more than doubled its tourist arrivals to over 4.5 million last year.

However, the bulk of tourists visit the capital Tashkent and the cradle of Moghul Islamic culture Samarkand. Bukhara is about eight hours by train from Tashkent. Recently, a Japanese built ‘bullet train’ has been introduced that cuts travel time by almost half.

As a centre of culture and trade, Bukhara has many unique offerings for tourists such as colourful folk dances, miniature arts and puppetry. The centre of the old city is the 1500-year old mud-brick fortress called ‘The Arc” and it is surrounded by impressively restored Madrasahs, the immaculately carved Kalyan Minaret and 10th century Samanid Mausoleum – one of the world’s most beautiful buildings made with exquisitely patterned mudbricks. These bear witness to a rich architecture of an ancient Islamic city.

Each evening during the tourist season from May to September, the Nodir Divan Begi Madrasah comes to life. During the day, it is another complex of souvenir shops, but at night it becomes a dining-theatre where a colourful 90-minute folk music, dance and Central Asian desert fashion show is presented to tourists by the Bukhara Philharmonic and Folklore Centre.

The music is very similar to Indian folk music such as that from Rajasthan. “We are employed by the government and train everyday,” a member of the group told IDN. “We perform to about 500 people every day during the tourist season.”

Bukhara has a rich history of miniature arts that go back to the 10th century when Persian manuscripts were produced here. The old city houses many such arts shops and many of them are also their studios.

Feruz Temurov, who taught this art form at the local university for eight years, now has his own studio-cum-shop in the old city. “I find this job more interesting than teaching” he says. “I meet a lot of different people and I get chances to go overseas”. He has held two exhibitions in France, three in Moscow and one in Vienna. “Bukhara arts is very famous, tourists are coming, and I can make a living on this,” he adds, but complains that too many people are now getting into this business to capitalise on the demand from tourists.

Puppets made with paper pulp is also a local cultural speciality, and puppet shows are performed by using the thumb and forefinger. “We are 17 people from three families running this business,” says 20-year-old Farrukh Akhmedov, who learned the art of making paper puppets from his father.

During the tourist season, tourists come to their shop to learn about this traditional art and Farrukh‘s father gives them a three-minute live performance. They can also buy the puppets made at the workshop for between 50 and 100 dollars each. “This is a year-long job,” he explains, “but we still work in off-season making puppets.”

Many residents of the old city living along narrow pathways have added extra rooms to their houses since the government has recently encouraged local residents to get involved in the tourist trade.

Today, Shavkat Boltaev, a professional photographer who worked for the government during the Soviet era, is a pensioner. He has added three upper floor rooms to his historic house and established a ‘homestay resort’ using his 5000 Facebook friends to advertise his business.

“After the collapse of the Soviet Union we had a hard time. But, now with the government encouraging tourism business, it has opened up new opportunities for us,” he told IDN. He has opened a gallery exhibiting his historic photos of Bukhara and has also gone into printing postcards.

“I like meeting people and I use my contacts in the photographic world to attract tourists here and stay at my place,” explains an optimistic Boltaev. “I want creative people to come here, have seminars and learn a lot of interesting things about our ancient city and region”.