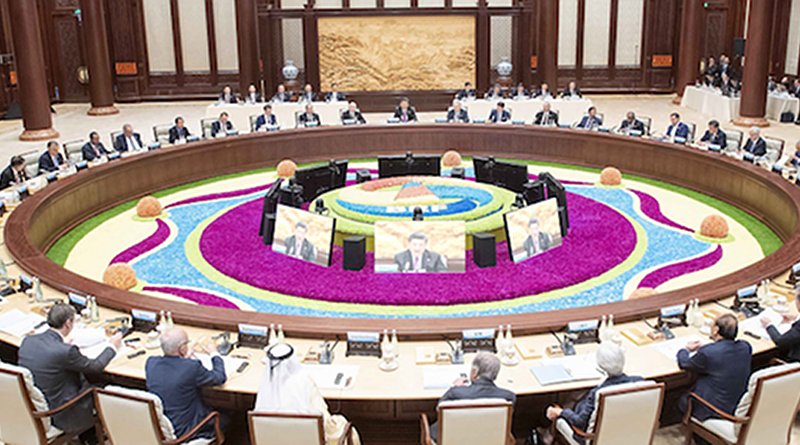 The Belt and Road Initiative (BRI) also known as the One Belt One Road ( OBOR) project could well emerge as the obor ( the flame in Indonesian or Malay) that will blaze the trail in the evolution of a new epoch in history.

Chinese President Xi Jinping must have sensed its historical significance when he announced OBOR in 2013. Essentially an infrastructure development endeavor, it seeks to initiate and support the construction of roads, railways, ports and bridges in at least 65 other countries spanning four continents. With a commitment of over 900 billion U.S. dollars, OBOR is the biggest infrastructure development project ever undertaken in the history of our planet.

It is more than infrastructure in the conventional sense. The China-Pakistan Economic Corridor (CPEC), for instance, which connects China’s Xinjiang province with Gwadar port in Pakistan’s Balochistan province, will strengthen Pakistan’s energy sector, contribute to economic growth and reduce its severe trade deficit. The CPEC will also enhance cooperation between the two countries in agriculture. There are other projects in other countries that will impact positively upon education and health care.

There is no doubt at all that OBOR will also facilitate the interaction of cultures and communities across national boundaries. This may lead to better understanding and appreciation of cultural and religious diversity. Greater respect for the differences and similarities that distinguish religions and cultures could help create an atmosphere that conduces towards social harmony.

If OBOR paves the way for positive interaction between different ethnicities and nationalities it would be replicating one of the outstanding achievements of the ancient Silk Route which was the inspiration for OBOR. Ideas and beliefs flowed along the Silk Route which connected East Asia and Southeast Asia with West Asia and East Africa to Southern Europe from about 130 BC until perhaps the middle of the 15th century.

It is significant that it was through the Silk Route that Buddhism, Christianity and Islam spread at different times in history. It was “the cauldron where language groups competed, where Indo-European, Semitic and Sino-Tibetan tongues wagged alongside those speaking Altaic, Turkic and Caucasian.” Places of worship and libraries dotted the region “connecting Constantinople to Damascus, Isfahan, Samarkand, Kabul and Kashgar.”

These fabulous cities were not only centres of culture and learning but also hubs of thriving commercial enterprise. Silk was an important element in the trade that connected the sprawling network of links which was why a German geologist in the 19th century gave it the name the “Silk Roads”.  Precious stones and metals, paper and artwork, leather and hides, grains and spices, fruits and vegetables were all part of the trade and commerce that brought China and India close to Persia and Rome and vice versa. The variety of goods and commodities available and the lands and nations that produced them endowed the Silk Route with an unprecedented global character. It was truly humankind’s first wave of globalization.

A variety of factors brought the wave to an end, among them Christopher Columbus’s expedition to the Americas and Vasco da Gama’s journey around the southern tip of Africa and on to India at the end of the 15th century, both of which opened up new sea routes for Europe’s ascending maritime powers.

Columbus in relation to the Americas and da Gama in relation to India and Asia heralded the rise of European colonialism which over the next four centuries embarked upon the conquest of land, the subjugation of people and the usurpation of natural resources that ushered in a pattern of power, control and dominance centering around Europe and later, the United States of America.

Indeed, western colonialism as it expressed itself in almost every sphere of life laid the basis for a new form of globalization which has perpetuated itself beyond the end of formal colonial rule. It is what one would call ‘hegemonic globalization’.

Hegemonic globalization has resulted in the dissemination of ideas and methods in economics and finance, politics and administration, education and science which by and large emanate from the centers of power in the West. It has shaped a world in which the interests and agendas of the dominant West supersede everything else. This is why the second wave of globalization is perceived as unjust and inimical to the well-being of the majority of the world’s citizens.

As globalization’s third wave, OBOR is opposed to hegemony. The Chinese leadership sees relationships among OBOR states as a partnership. It has no intention of imposing its will upon any other state. This was put to the test in the East Coast Rail Link (ECRL) issue which saw Malaysia objecting to various terms of the agreement forged between a Chinese company and the previous Malaysian government  that were clearly detrimental to the nation’s interests. After strenuous negotiations, the agreement was revised extensively for the good of both parties.

It is not just China’s willingness to consider the interests of a partner state that facilitated a solution to the ECRL issue. The partner state should also be free of those vested interests that impede a just solution. It is important to observe that even in other collaborative efforts in which China has played a leading role such as the Asia Infrastructure Investment Bank (AIIB), the Brazil, Russia, India, China and South Africa (BRICS) network and the Shanghai Cooperation Organization (SCO), China has adopted a collegial approach.

Given its record, China should now elevate the principle of partnership in OBOR to a higher level by establishing an international panel consisting of seven to ten OBOR states that would be given the task of monitoring and evaluating the implementation of OBOR projects and activities. The proposed panel would of course work closely with the Chinese authorities.

It could also help ensure that OBOR is corruption-free which is the wish that Xi expressed at the recently concluded Belt and Road Forum for International Cooperation in Beijing. There will be other challenges facing OBOR in the years ahead. But the governments that are committed to the project should remain steadfast in their determination to achieve its goals.

For apart from the economic and cultural benefits that OBOR will bring to the human family which we have noted, OBOR is the best hope we have for evolving a just and equitable world which is not dominated by a few. Only in such a world will human dignity flourish. This is perhaps the most compelling reason why the citizens of the world should strive with all their energy to keep the flame alive.

*The writer, Dr Chandra Muzaffar, is the President of the International Movement for a Just World (JUST).